Culture and Heritage is what I like the most about my Country – India. Rajasthan has been one of the most popular states for tourists from India as well as abroad. This is the reason why I have been exploring new places in Rajasthan every few months. In 2015 and Early 2016, we went for a trip to Jaipur. However, a lot of other places in Rajasthan were left unexplored and thus we did a 1600 km Road Trip to Rajasthan and covered many places like Chand Baori, Sariska National Park, Udaipur, Kumbhalgarh Fort & Jaipur. 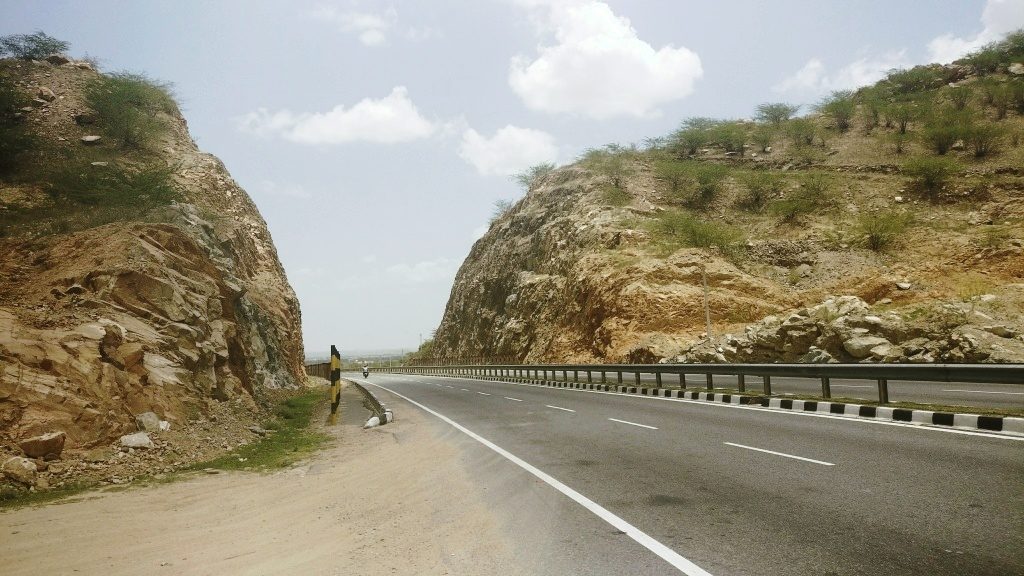 As we enjoyed a lot during our last trip to Rajasthan with family, so I decided do another family trip to Rajasthan. This trip was again a long one and covered approximately 1700 kms to and fro from Agra in Uttar Pradesh. This trip included the following places Brahmakumari’s Gyan Sarovar in Mount Abu, Mount Abu City Tour, Bullet Baba Temple in Pali Distt., Jodhpur and Pushkar.

Itinerary for our Road trip to Mount Abu, Jodhpur & Pushkar

Rajasthan is usually quite hot in Summers and the best time to visit this state is during winters in the months of December and January. Still if you want to visit Rajasthan in any other season, I would suggest you to be there in the monsoons. If you are lucky enough the rains might bring down some temperature as it happened in our case.

We started our journey my home at Agra and the itinerary was as follows :

What made us plan yet another long Trip to Rajasthan ?

Rajasthan is state where you can visit over and again and explore its culture and heritage in various angles. When you travel by Road, you can explore the attractions in a more convenient and better way. Even after covering a lot of other destinations in Rajasthan, I had missed out on some of the them which I wanted to cover – Mount Abu, Bullet Baba Temple, Jodhpur and Pushkar are the ones.

On 31/05/2017, We started our trip early from Agra at about 8:30 am and moved on the Agra-Jaipur Highway. Everything was fine till we crossed Jaipur. However, after we crossed Jaipur it started raining very heavily along with strong winds. I could not see anything and had to stop on the side of the road for about half an hour as it was totally dark outside. 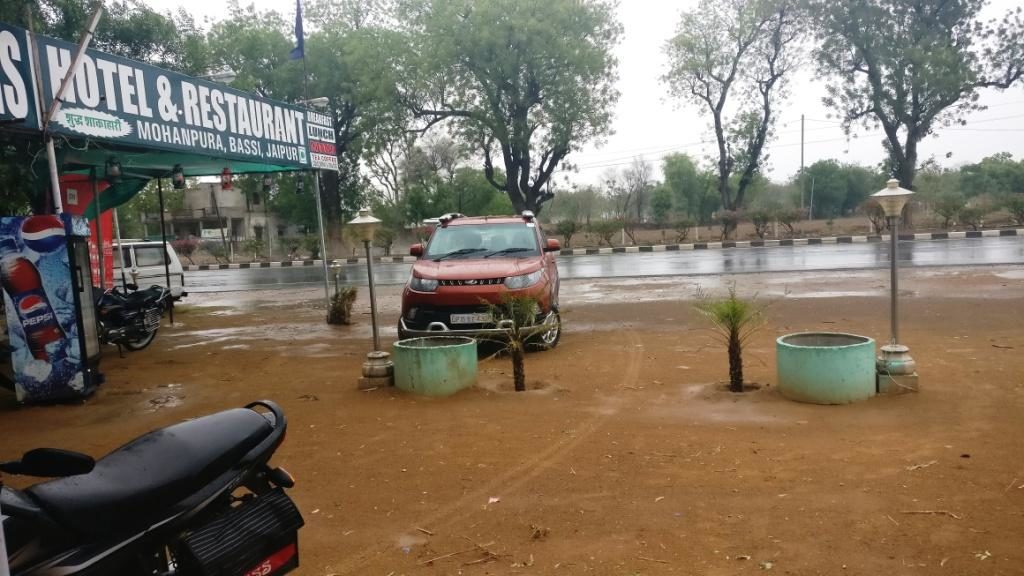 We moved for a while and stopped at a Dhaba to have some tea and food. As distance from Agra to Mount Abu is more than 700 kms, I had already booked our stay at a Resort named Krishnam Dhani on Jaipur-Ajmer Highway near Ajmer. We reached the resort at 4:30 pm. 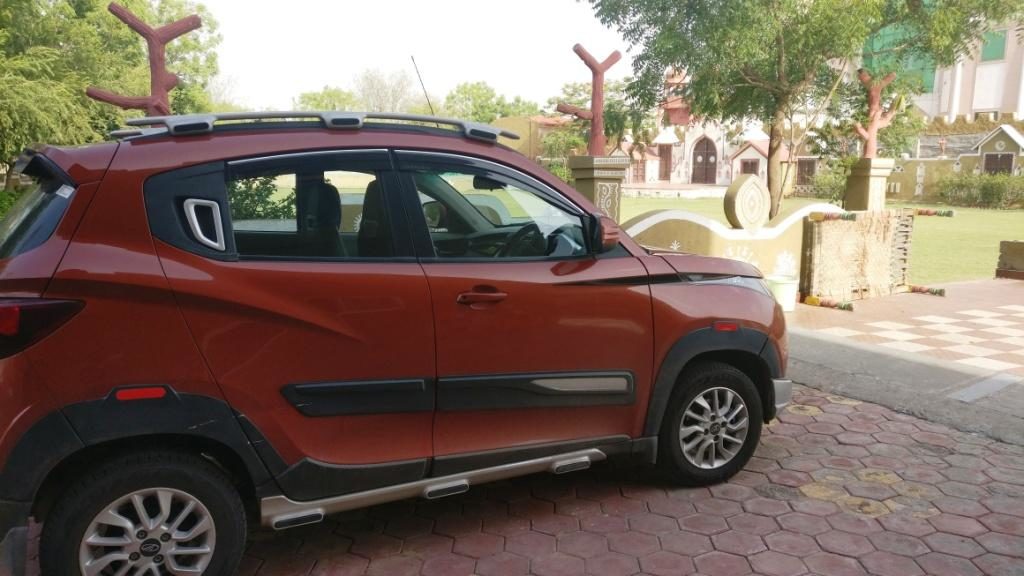 This Resort is made in a typical Rajasthani style. Not only that, it conducts various activities within its compound every evening which attracts tourists from neighboring places and people travelling on this highway.

And yes! You must not miss out on the breakfast that too in Rajasthani style! 🙂 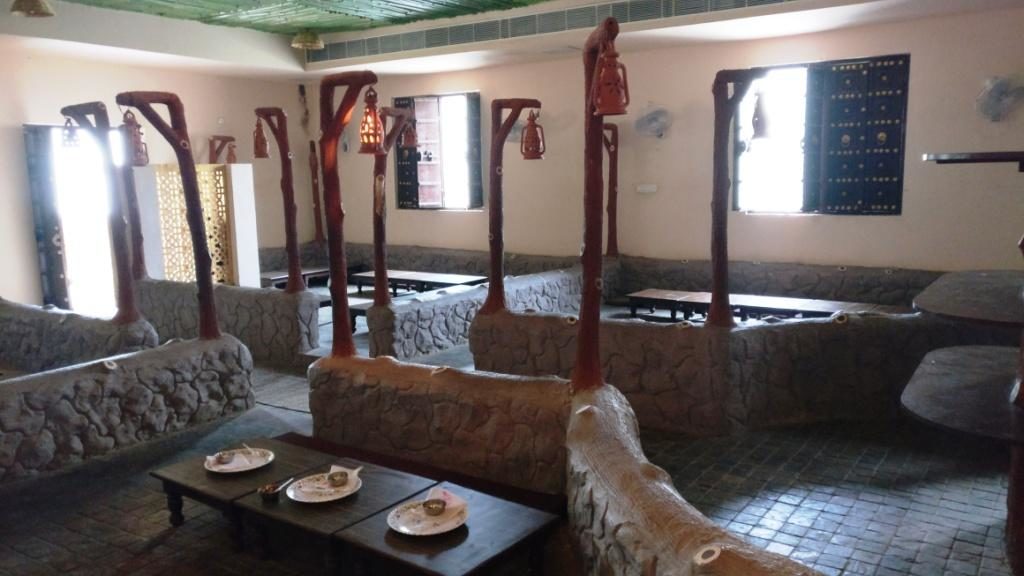 Although, the resort was not properly managed but still in a budget of around Rs.1200 per AC Room with along with breakfast, it was good enough.

On 01/06/2017, we finished with the breakfast at 9:00 am moved towards Mount Abu on Ajmer-Beawer-Pali-Mount Abu Route as it is shortest of all routes. 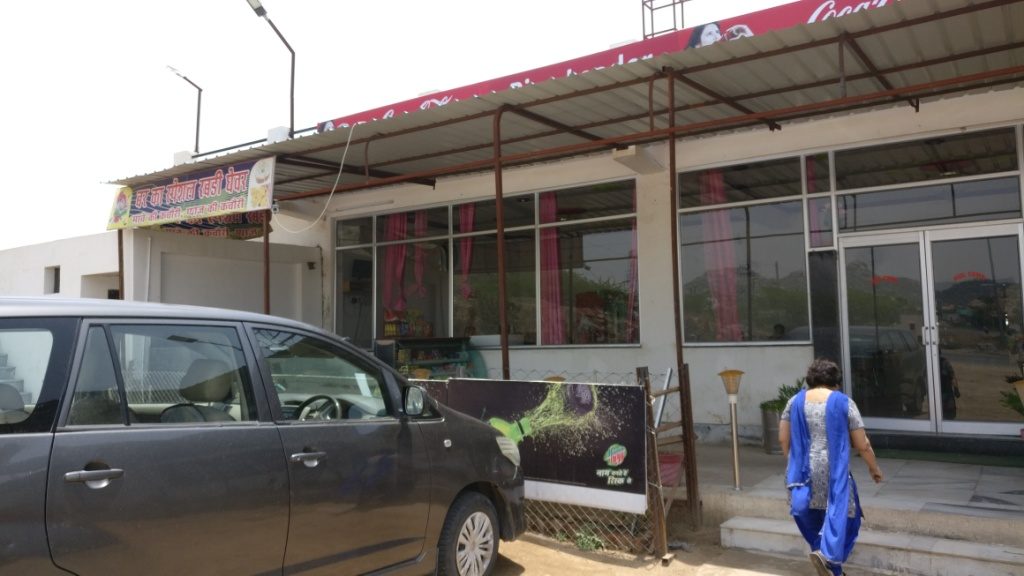 We just had 1-2 haults for tea and refreshments and reached Brahmakumari’s Gyan Sarovar, Mount Abu at about 6:00 pm. We completed some formalities and got our room. 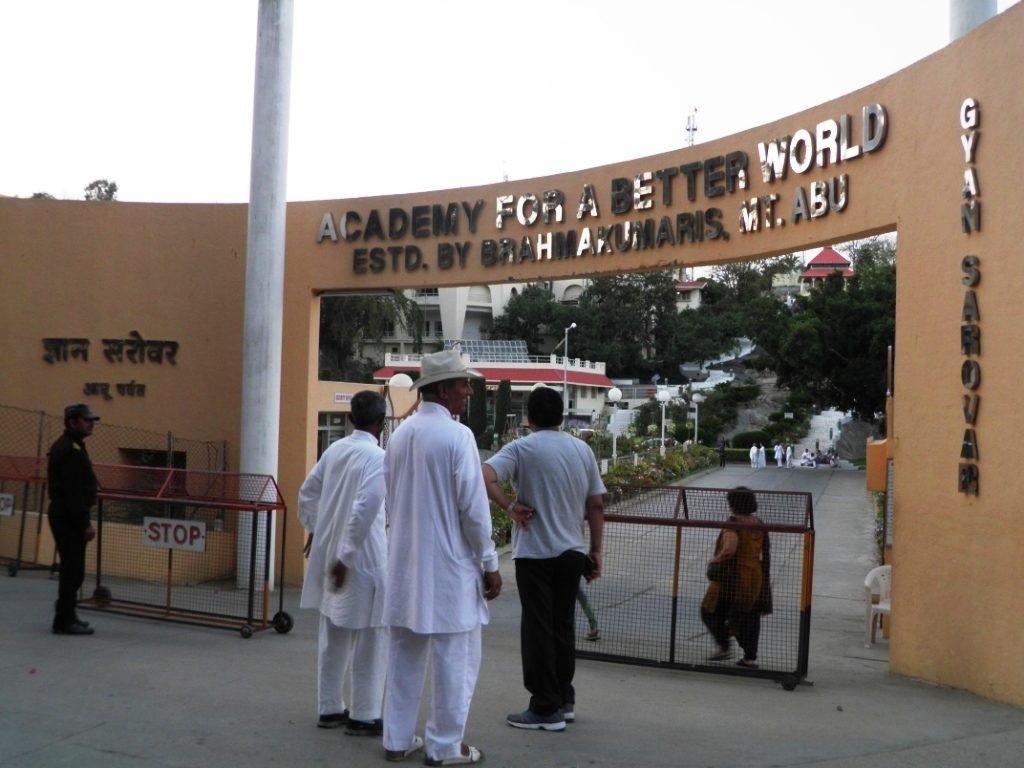 We had quite an early dinner and also went to sleep early as everyone was tired.

We spent the next 3 days (i.e., 2nd, 3rd and 4th June,2017) at Gyan Sarovar learning about Meditation and the influence of Media on the change and upliftment of the Society. 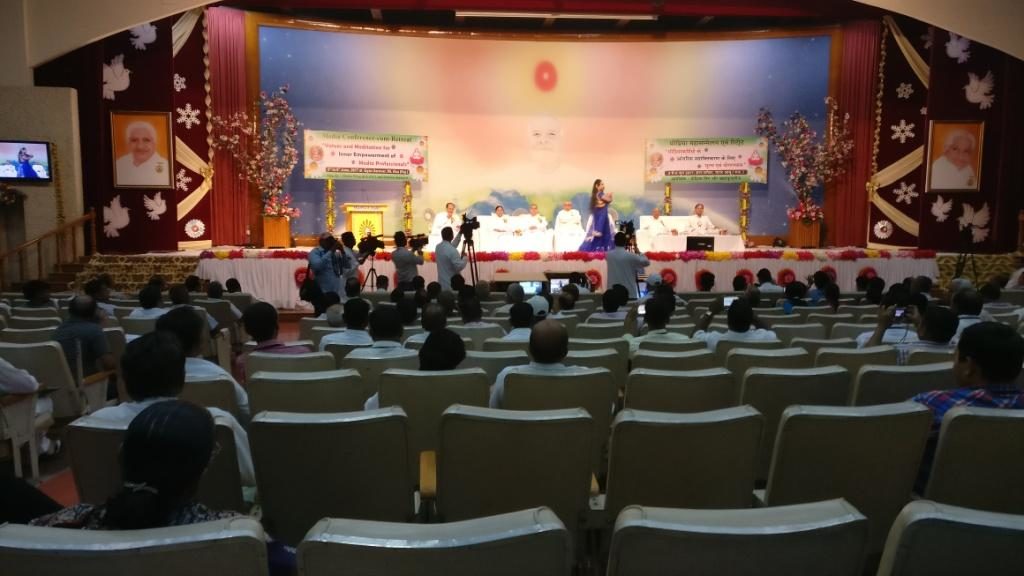 Although I can go on discussing about everything what was being discussed there but I would say, it is better I would come up with a separate Article about the same very soon. The reason being, it may not seem interesting to everyone.

Peace Park in Mount Abu is a well known as a part of the Brahma Kumaris spiritual establishment. The park is a perfect escape from a day to day city life to find serenity. 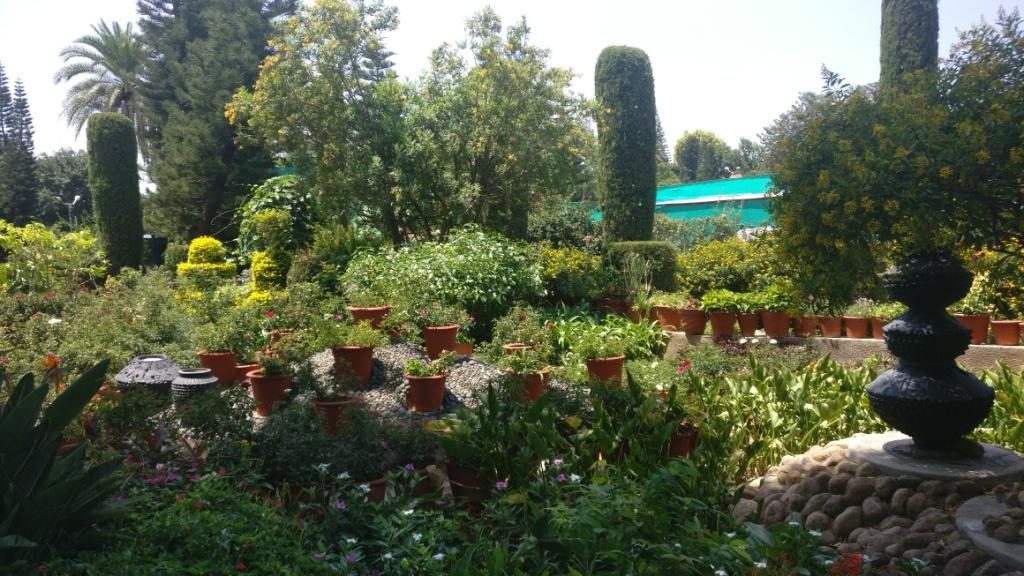 Global Hospital is also a Brahma Kumaris establishment and it stands out from other hospitals. I am saying this because this hospital is committed to deliver healthcare everyone, without asking for patient’s economic or social standing. In a span of 25 years, it is said that no patient has ever been turned away from the Hospital for the want of money to pay his or her bill.

Nakki Lake is known to be paradise for nature lovers. The lake in stretched at a half a mile in length and quarter of a mile in width. A lot of you may not be knowing that Mahatma Gandhi’s ashes were immersed in Nakki Lake on 12 February 1948 and also a Gandhi Ghat was constructed here. We were also taken to a few other attractions of Mount Abu like Dilwara Temples and Madhuban. Popular as the only Hill Station of Rajasthan, Mount Abu offers only a limited number of tourist spots. 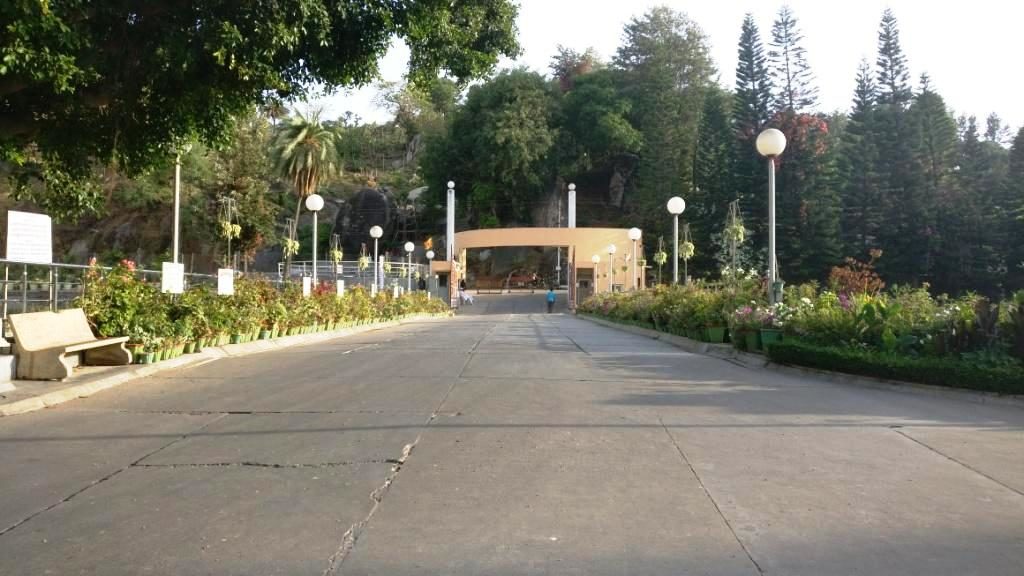 I managed to record a video of the temple, which might look a bit interesting to you. Do have a look at the above Video. After spending about 30-40 mins at the temple, we continued our journey towards Jodhpur.

We reached at our Home Stay in Jodhpur at around 2:30 pm. We booked this Home Stay through Airbnb and it was just satisfactory. Not as good as we experienced on our previous trips to Jaipur and Udaipur. However, as we had to spend just 1 night at Jodhpur, it was not much of a problem.

The weather had been quite supportive all thoughout the trip. However, as soon as we reached Jodhpur it felt really hot. We felt quite exhausted but as we came specially to visit the city, we didn’t waste much time and moved towards the most popular attraction of Jodhpur i.e., Mehrangarh Fort.

I had seen a lot of pictures of it, so I always wanted to visit this fort. Finally we reached the fort in the afternoon at around 3:30 pm. The view from the fort is mesmerizing. After having visited a lot of places in Rajasthan, I can say the view from Nahargarh Fort in Jaipur is the best and at the 2nd position I would place the Mehrangarh Fort.

You can check out the complete video of Mehrangarh Fort below.

Also, there is a Video of a beautiful Museum in Mehrangarh Fort. You can have a look at it as well.

As the fort was huge, we hardly had time to visit any other place in City. We just spared some time for some shopping in and around Tripolia Bazaar, had dinner at a restaurant and went back to the Home Stay till 8:30 pm or so.

On 07/06/2017, We started from Jodhpur at around 9 am. Yet again we planned to book the same resort i.e., Krishnam Dhani. We reached the resort at 2:30 pm. After taking a bit of rest we planned to go to Pushkar which was around 32 km from the resort. We reached Pushkar at 4:00 pm and this is how it looked like.

After spending a bit of time in Pushkar, we went back to Krishnam Dhani. As we did not book Dinner at Krishnam Dhani, we had a bit of snacks at the adjoining McDonald’s.

On 08/06/2017, it was the day when we had to finally return back to our home. Just after having the mouth watering breakfast at the Krishnam Dhani, we moved back to Agra. Taking just a single hault for Launch near Fatehpur Sikri we finally reached home sweet home at 4:00 pm and it was the end of our longest trip to Rajasthan till date(In terms of Distance as well as No. of Days). 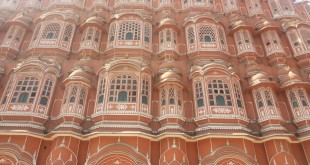