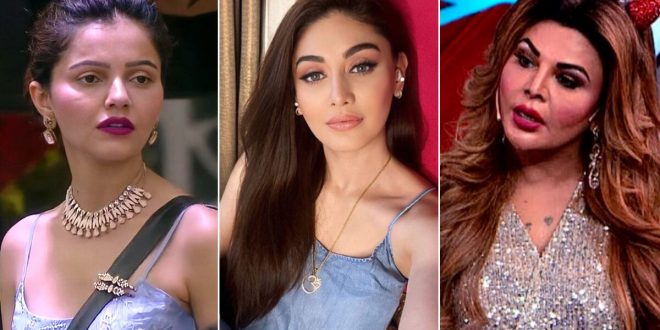 Former Bigg Boss contestant Shefali Jariwala who is an avid follower of the latest season of the controversial show has reviewed the same. In an interview with ETimes TV, the Kaanta Laga babe talked all things BB and we bet it will be a treat for all the fans of the reality show. In a conversation with the portal, Shefali mentioned how she was shocked to see Jasmin Bhasin getting evicted. That’s not it, as she also sided Rubina Dilaik and her ‘authoritative’ attitude and expressed how she is loving her personality on Bigg Boss. Bigg Boss 14: Captain Rakhi Sawant Has Turned Into Rubina Dilaik and Abhinav Shukla’s ‘Chamchi’, Feel Fans.

Praising Rubina and expressing that being dominating is nothing wrong, Shefali said, “Even if Rubina is authoritative, dominating there is nothing wrong in it. She is fierce and that is her personality. She is using that to her advantage and moving forward in the game. I don’t think there should be a problem if someone is fierce, opinionated and has a strong personality. These are the ingredients that the contestants require to survive in the game.” Bigg Boss 14: 5 Reasons Why We Think Jasmin Bhasin Deserves to Make a Comeback on Salman Khan’s Reality Show!

She also talked about how the punishment by Bigg Boss led to Jasmin’s eviction. “I don’t think there was anything wrong in it. Because of this nomination, a very strong player like Jasmin Bhasin has been evicted. I feel sad for Jasmin and not only Jasmin if anyone else from the four would have got nominated I would have felt bad because I was not convinced with the nomination punishment that they got.” she added. Rakhi Sawant’s Mother Reveals Her Son-In-Law Ritesh Will Soon Come To India And Accept Rakhi As His Wife.

Finally, adding her thoughts about Rakhi Sawant, Jariwala tagged the Pardesiya girl a TRP churner of the latest season. “Rakhi shined this week also. Whatever it was, it was her conversation with Bigg Boss during the family round where for the first time we got to hear Bigg Boss smiling or her conversation with her mother who is in the hospital. She melted my heart when she asked her mother to forgive Jasmin. I’ve not seen this side of Rakhi and I like this side of hers,” she told the portal. Stay tuned!

(The above story first appeared on Amazing India Blog on Jan 13, 2021 10:51 PM IST. For more news and updates on politics, world, sports, entertainment and lifestyle, log on to our website amazingindiablog,in).