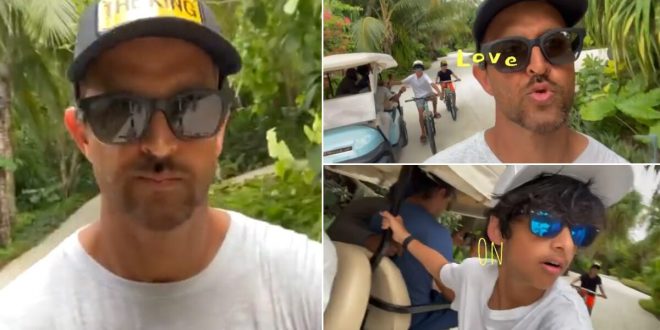 Hrithik Roshan loves to go on adventures with his boys Hrehaan and Hridhaan. If you look at the actor’s Instagram handle more than his own photos, you will see his pictures with his sons. The three do all sorts of things. From trying out new sort of food to going on new adventures, the trio is an absolute father-sons goals. Hrithik has posted yet another quirky video from one of their vacations and we think it is the right kind of energy we need to kick in the weekend. Hrithik Roshan Notices Viral Tiktok Dancer Yuvraj Singh, Calls Him the ‘Smoothest Airwalker’.

The video shows Hrithik grooving to This One’s For You by David Guetta has he shoots a close up of his face. The boys also seem to be in a groove as they cycle along with their father. Hrithik even busts some really spunky moves while cycling and managing the camera and looks in a very cheery mood. The video garnered more than 5 million views in just an hour. Tiger Shroff who was seen alongside Hrithik in War dropped laughing emojis in the comment section of the post while his Super 30 co-star Mrunal Thakur dropped the two hand emoji on his post.

On the work front, Hrithik recently announced his film with Deepika Padukone. Titled Fighter, the film will be directed by Siddharth Anand. This would be Hrithik’s second collaboration with the director and his first and much-awaited appearance alongside Deepika. Earlier a source had revealed to SpotboyE, “The problem was not in bringing them together. Not at all! Both Duggu (Hrithik) and Deepika were keen to work together. But it had to be the right bright script with equal roles for both. This is why Deepika has said no to other offers with Duggu in the past. Finally, Siddharth Anand has come up with a script that’s totally worth it for Deepika.” Hrithik Roshan’s Ek Pal Ka Jeena Gets a Tribute from a Father-Son Duo, Check out their Viral Dance Video.

(The above story first appeared on Amazing India Blog on Jan 14, 2021 06:03 PM IST. For more news and updates on politics, world, sports, entertainment and lifestyle, log on to our website amazingindiablog,in).