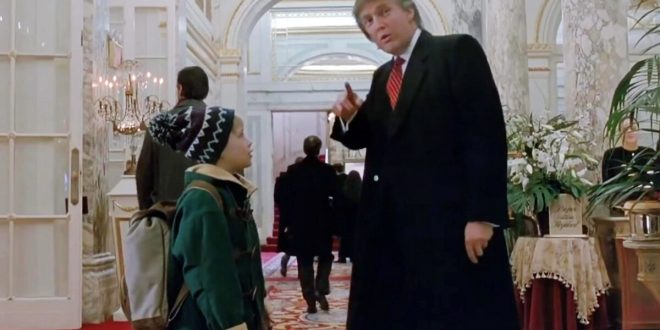 Actor Macaulay Culkin has shown support to edit scenes featuring DonaldTrump from his 1992 global blockbuster, Home Alone 2: Lost In New York. Culkin, now 40, starred as Kevin McAllister in the popular Christmas film. He shared his thoughts on having Trump edited out of the film around the time of the outgoing US President’s second impeachment by the House of Representatives, reports people.com. “Petition to digitally replace trump in ‘home alone 2’ with 40-year-old macaulay culkin,” tweeted a fan. Saturday Night Live: Alec Baldwin Delivers Spoof Farewell Address as President Donald Trump

Culkin responded saying: “Sold”. Another fan actually edited out Trump from his scene with Culkin and shared it on Twitter. “Due to popular request I have removed trump from home alone,” the fan wrote alongside the video. The actor replied: “Bravo”. Arnold Schwarzenegger Calls US President Donald Trump A ‘Failed Leader’, Says He Will Soon Be ‘As Irrelevant As An Old Tweet’ (Watch Video)

Culkin and Trump had a brief interaction in the film as they were in the New York Plaza Hotel, which Trump owned from 1988 to 1995. In the scene, former child actor Culkin approaches Trump and asks for directions to the lobby. In November, Home Alone 2 director Chris Columbus said Trump bullied “his way into the movie” because they were shooting on his hotel property.

(The above story first appeared on Amazing India Blog on Jan 14, 2021 02:47 PM IST. For more news and updates on politics, world, sports, entertainment and lifestyle, log on to our website amazingindiablog,in).