Mawlynnong Village of the East Khasi Hills of Meghalaya is also referred as ‘God’s own garden’ . It has won the acclaim of being the cleanest village in Asia in 2003. The village known for its cleanliness is being governed through a community based eco-tourism initiative. The community has made collective effort to maintain the ambience of a clean village.

Let us know more about what this amazing village offers, its location, beauty, handicrafts and how to reach this village.

The village offers picturesque natural beauty, a trek to the living root bridge at a neighbouring village Riwai. The village also offers a sight of natural balancing rock, a strange natural phenomenon of a boulder balancing on another rock. The adage “Neighbours envy, owners pride” is apt for Mawlynnong as it has earned the distinction of being one of the cleanest villages in Asia, a fact that every Mawlynnong villager is proud of and other villagers are envy of.

The village is quite pretty, especially in the monsoons when there is lush greenery all around, with waterfalls paving the way to small streams and abundance of flowering orchids dangling from the trees and hedges add to the beauty of the village.

The onus to keep the village clean lies with every person residing in the village. Local cleaning the roads, picking up leaves and throwing garbage in the bin is a very common sight. Bamboo garbage bins adorn every nook and corner of the village highlight the consciousness of cleanliness among the villagers. Cleanliness is an age old tradition and a way of life for all villagers. 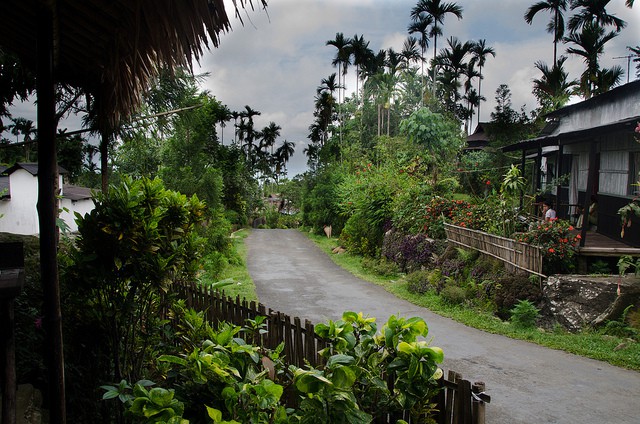 The village has won the title for being the cleanest village in Asia in 2003 as well as the Cleanest Village in India in  the year 2005. The village also offers breathtaking views of of Bangladesh plains as it is located on the Indo-Bangla border.

Swach Bharat initiative by Prime Minister of India is a recent drive undertaken by the Government of India to inculcate a sense of cleanliness, hygiene and development of healthy environment in the society, but the tiny village Mawlynnong in the remote areas of North-East has already long back had set an example in this regard.

Mawlynnong is about 90 kilometres from the capital of Meghalaya Shillong and just four km from the Bangladesh border. It is one of the wettest parts of the country. The society is matrilineal making women socially and economically powerful who takes full command in their hands and property is passed to the younger daughter of the family. The Khasi tribal inhabitants are known to be worshippers of nature.

Situated under district East Khasi Hills of Meghalaya, the village has a population of about 500 people comprising 95 families and. Most of the people are employed in betal nut farming. A noteworthy feature of the village is that they pay proper attention to the schooling of the kids, that is why it has attained the literacy rate of 100 per cent.

Mawlynnong offers one the opportunity to view natural beauty in abundance from the Sky Walk, a 80 feet high “machan’ or observatory. You can also visit the Living Root Bridge and Natural Balancing Rock. For nature lovers, one day trek offers living amidst nature in all its glory.

The people of the village make good use of bamboos with handmade dustbin of the local produce. The waste collected in these dustbins is segregated and deposited in pits which later used as organic manure which is very useful for agri-produces. People are fond of keeping backyard gardens.

Toilet in every House :

The village claims to have a functional toilet in every house in the year 2007, much before the celebrity Vidya Balan advocates people to have one! Children in the schools are taught to keep their surroundings clean. It is a matter of awareness that a majority of toilets have been built by the residents from the grants provided by the government of India in the decades of 2000.

The village got the title of Asia’s cleanest village way back in the year 2003. Littering of any kind is treated as social offence and even the tourists, who visit the village after it reaches its fame, desist littering.

Mawlynnong is located about 90 km from Shillong and 92 kms from Cherrapunjee and can be reached by road. The nearest airport is Shillong in Meghalaya. Some tourist companies arrange transport for its guests from Guwahati, Shillong as well as Cherrapunjee.