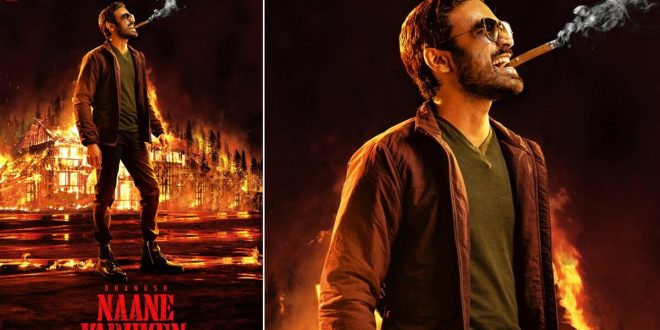 Dhanush and Selvaraghavan’s next which was tentatively termed as ‘S12’ has finally got its title. The actor took to his social media and announced the name of his movie i.e Naane Varuven along with the first look posters. FYI, this is not the duo’s first time together as earlier, the brothers have collaborated for four films. Also, the rest of the star cast is still kept under the wraps, but going by the glimpse, this one looks power-packed. Produced by Kalaipuli, the flick will have Yuvan Shankar Raja’s music and Arvind Krishna’s cinematographer. Dhanush’s Pudhupettai Completes 14 Years of Release; Fans Trend #14YearsOfEpicPudhupettai On Twitter and Demands Its Sequel.

Elaborating on one of the posters, Dhanush can be seen in quite a fashionable avatar. The actor in the pic is donning a tee, jacket, pants and a pair of black boots. However, it’s the backdrop which is rather intriguing, as it sees a huge house which has caught fire. Not to miss, the actor’s cigar swag and attitude in the picture. All in all, we feel, this one will be a promising actioner. What do you think?  Dhanush to Celebrate His 37th Birthday on July 28! Jagame Thandhiram Makers Announce the Release of the Film’s First Single with a New Poster.

Check Out The Poster:

Apart from Naane Varuven, Dhanush and Selvaraghavan also have Ayirathil Oruvan 2 (2024 release). For the fans, he also has some films which are slated to release this year namely Karnan and Jagame Thandhiram. Coming back to Naane Varuven poster, do tell us your opinion on it in the comment section below. Stay tuned!

(The above story first appeared on Amazing India Blog on Jan 13, 2021 09:35 PM IST. For more news and updates on politics, world, sports, entertainment and lifestyle, log on to our website amazingindiablog,in).