Home / News / Entertainment / Pawan Kalyan’s Vakeel Saab Teaser Out! Netizens Are Blown Away With the Swag of the Power Star 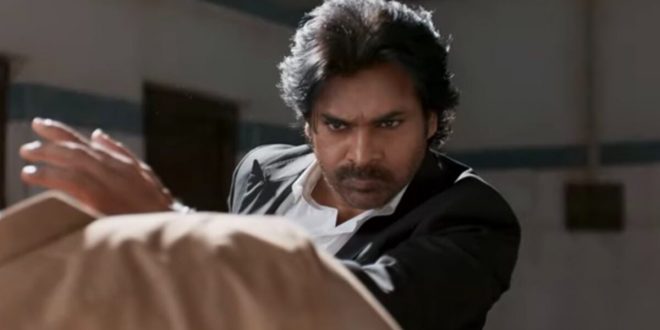 Pawan Kalyan’s Vakeel Saab Teaser Out! Netizens Are Blown Away With the Swag of the Power Star

Superstar Pawan Kalyan’s much-awaited Vakeel Saab teaser was finally unveiled on the auspicious occasion of Makar Sankranti/Pongal 2021. This flick marks the comeback of PSPK after a hiatus of two years and seems like he is all set to roar at the box office. The almost a minute teaser is all about Kalyan and is swag. Right from showing the actor saying ‘objection your honour’ in the courtroom to his fighting scenes, Vakeel Saab looks promising. Well, not just us, even fans of the power star are impressed and are going mad on Twitter. Vakeel Saab Teaser: Pawan Kalyan Makes Sure His Comeback Is Stylish and Powerful (Watch Video).

From celebrating the teaser release on the micro-blogging site to even lauding the power-packed action sequences, netizens are in no mood to calm down. For the unversed, Vakeel Saab is the Telugu remake of Hindi film Pink that starred Amitabh Bachchan as the lead. However, after seeing the teaser, we guess, makers have tweaked a few scenes to suit PK’s personality. Check out how Twitterati are reacting to VS teaser. Vakeel Saab: Teaser Of Power Star Pawan Kalyan’s Film To Release On January 14, Producer Boney Kapoor Confirms.

Sharp, stylish and cranky- that’s the teaser of #VakeelSaab for you. Powerstar @PawanKalyan is looking as dynamic and attractive ever. The #VakeelSaabTEASER is sensational with powerful screen presence, stylish visuals and sensational bgm! Looking forward 👍@MusicThaman pic.twitter.com/J24UaZqQAs

The Attitude is Just F*king out of the World 😎

As soon as the teaser was out, #VakeelSaabTEASER was among the top trends on Twitter and the amount of love that is being showered on the star is immense. Vakeel Saab also sees Shruti Haasan in a key role. Besides her, it also stars Nivetha Thomas, Anjali and Ananya Nagalla reprising Taapsee Pannu, Kriti Kulhari and Andrea Tariang’s role from the original. VS is produced by Boney Kapoor and helmed by Venu Sriram. Stay tuned!

(The above story first appeared on Amazing India Blog on Jan 14, 2021 07:29 PM IST. For more news and updates on politics, world, sports, entertainment and lifestyle, log on to our website amazingindiablog,in).