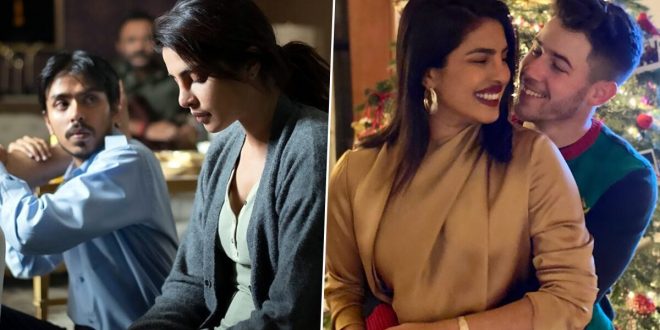 Nick Jonas loves everything Bollywood, quite literally! He loves to jam on Hindi songs with Priyanka and watch movies with her. Nick never misses to watch her films and makes sure he boosts her confidence every time. Nick is often seen posting his thoughts on Priyanka’s movies and now since her film The White Tiger starring Rajkummar Rao,  Adarsh Gourav, the singer made sure he shares his views on it. The actor watched the film and shared a quick review for his fans on social media. The White Tiger Trailer: Priyanka Chopra, Rajkummar Rao’s Riches Inspires a New Slumdog Millionaire.

Posting a picture of one of the scenes of The White Tiger playing on the television, Nick said that the film was unreal. He went on to say that Priyanka’s acting in the film is exceptional. The actress essays the role of Rajkummar Rao’s wife Pinky in the film. Rajkummar Rao essays the role of a wealthy man who hires Adarsh’s character Balram as his driver. The photo shared by Jonas on his Instagram story showed a scene where Priyanka is talking about something.

Back in October 2020, Priyanka had posted a still from the film and described her character saying, “In #TheWhiteTiger, I play the role of Pinky madam, who is a first generation immigrant in the US. She is in India with her husband, who is travelling for business. And then… life changes! Pinky madam is such a specific character, to play her unravelling in the story was such a joy. This is a story that needs to be told and it comes alive with its characters so compellingly in Ramin’s hands.” The White Tiger: Priyanka Chopra, Rajkummar Rao and Co Celebrate as As They Complete 50 Days Of Shoot of This Netflix Film.

The White Tiger touches upon the subjects like corruption, class divide, poverty where Adarsh’s character decided to fight the norms and make something out of his life no matter how. The film will premiere on Netflix on January 22, 2021. The movie is based on the 2008 novel by Aravind Adiga which went on to win the 40th Man Booker Prize. The movie has been adapted and directed by Ramin Bahrani.

(The above story first appeared on Amazing India Blog on Jan 13, 2021 04:05 PM IST. For more news and updates on politics, world, sports, entertainment and lifestyle, log on to our website amazingindiablog,in).