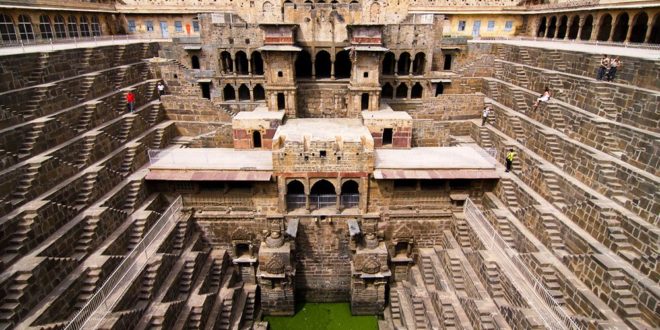 Besides ancient monuments and incredible natural flora and fauna abundance in India, you can administer the beauty of step wells too. These are the ancient wells which were built by the Rajputs, Mughal and regional kings for the purpose of taking bath, water supply and rain water harvestation. The Stepwells are also majorly called by the name Baori. These are the man-made pond-like structures which have water collection further used to take bath and wash clothes. The steps start with the upper case i.e. from above the sea level surface and descend towards the pond area. The staircase structures are built so beautifully that one could sit and relax for hours. Around 100 of people at a time can sit around the stepwell and chat.

Out of various ancient structures, there are some top 10 Stepwells in India listed below-

There are 3500 slender steps and around 13 storeys in the Chand baori. This is known to be the deepest and most exquisite stepwell in India. This landmark is located in Rajasthan and available for tourist visit all around the year. Admire the beauty of this step well in India whenever you visit next and take pictures from all 13 storeys to see the different natural diversions in the images due to water reflection.

In the Patan city of Gujarat, you will find this wonderful queen’s stepwell known to stand at a special niche amongst the top 10 stepwells in India. This has been integrated into the list of the UNESCO’s world heritage site earlier.

Rani ki Vav is a stupendous place to visit as it includes architecture from one of the most ancient periods of Indian heritage. There are several pillars and multiple storeys for climbing back to the surface or to descend downstairs easily. This was used 100 years back by the queen of the dynasty.

This is the stepwell located in Ahmadabad in the village called Adalaj. The unique Hindu mythology inspired step well attracts many people every year. There are colourful festivals and sacred rituals celebrated by the local people and this is being admired by the entire state.

Rani Ji ki baori is the stepwell which has a multi storey and it consists of a place to worship. The well is located in Bundi town which is centrally located in Rajasthan. However, on each floor, there is a 46-meter deep step well and integrates several carvings on the pillars that depict the Hindu traditional format.

This is a stepwell which is very popular in India and it is being taken into custody by the archaeological survey of India. The Agrasen ki baoli is a 60 m long and a 15 m wide stepwell which is located near Connaught place in New Delhi nearby Hailey road. There are total 103 steps made up of red stones and it is known for its haunted reasons till date. Aamir Khan and Anushka Sharma starrer popular bollywood movie ‘PK’ was also shot here.

Rajon ki baoli is amongst the top 10 Stepwells in India which is located in New Delhi area called Mehrauli. There are several significant monuments nearby such as Qutub Minar, Humayun tomb etc. in Mehrauli there are two significant stepwells and they are- Gandhak ki baoli and another is the Rajon ki baoli.

The chalukya architecture is admirable and it is popularly seen at the Hampi stepped well. This is the well which was built for personal use in the 15th century, where rain water was the key source for water supply. The Vijaya Nagar dynasty was the founder of Hampi stepwell.

On the way to Hampi you will find a village called Lakkundi. There are various chalukya architecture example temples and step wells. They all possess historical inscriptions and traditional values. The most beautiful baoli in Lakkundi are kanne bavi, musukina bavi and the chateer bavi. They all have been tourists’ attractions during the peak season.

Bara Imambara is a historical monument situated in Lucknow, Uttar Pradesh. It is one of the finest buildings in Lucknow that is used for tourism as well as religious activities by current date. There is a step well in the Imambara which has the significance that it was used by the queen and other courtyard people for the water supply.

This is the step well which is again taken care by the archaeological survey of India. It is located near by the River Pushpavati. In the Modhera temple, this step well was constructed by the ancient people and it is known to exist since ages while possessing some finest values of the geometry.

Besides, the above-mentioned step wells there are various small step wells located in Madhya Pradesh, Maharashtra and Karnataka that are not yet so popular but very significant places for the localities of the city.