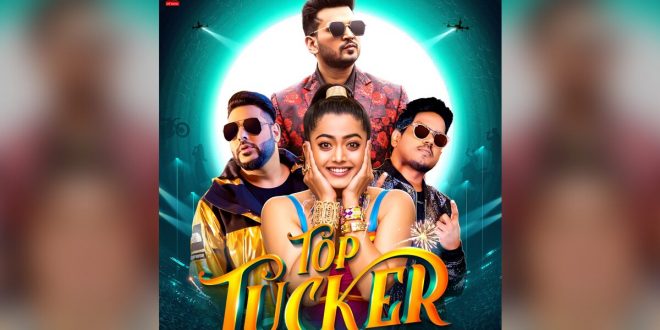 Recently, Karnataka’s crush Rashmika Mandanna had created a stir online when she posted ‘First time in Chandigarh’ on her social media, and fans started speculated that something huge in on the way. Later on, it was revealed that the actress was in the city to shoot her first-ever music video. And well, now the beauty has officially teased fans with the poster of the musical treat that also is going to feature rapper Badshah. The glimpse also sees South’s Yuvan Shankar Raja and Amit Uchana. Sharing the poster, she wrote, “Ladies and gentlemen presenting to you.” Rashmika Mandanna To Make Her Bollywood Debut With Mission Majnu; From Kirik Party to Bheeshma, 5 South Movies of Hers You Should Check Out!

Elaborating on it, the picture sees Rashmika in the middle of all the three popular faces with an elated expression. The actress can also be seen wearing a flashy attire paired with chunky gold jewellery. However, the poster does not reveal the release date of the song but says it’ll be out on YRF’s YouTube channel. Going by the looks, this one seems a fun collaboration. Mission Majnu: Rashmika Mandanna To Make Her Bollywood Debut Opposite Sidharth Malhotra In Shantanu Bagchi’s Film!

Well, now we wait for the music video to drop soon. Meanwhile, Rashmika is one of the highest-paid actresses in Kannada and Telugu cinema. She is now all set to make her a Bollywood debut with Mission Manju opposite Sidharth Malhotra. Helmed by Shantanu Bagchi, the film’s shooting is slated to go on floors from February 2021. Stay tuned!

(The above story first appeared on Amazing India Blog on Jan 13, 2021 04:14 PM IST. For more news and updates on politics, world, sports, entertainment and lifestyle, log on to our website amazingindiablog,in).