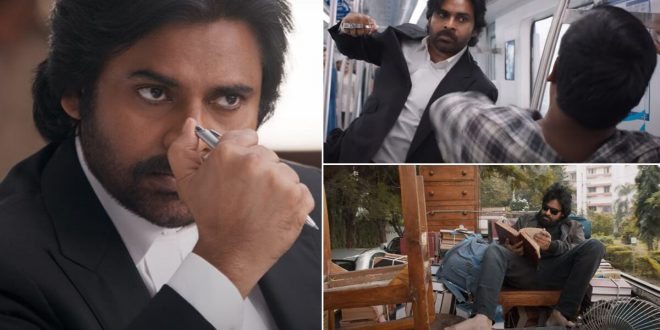 Twitter has been abuzz with discussions about Pawan Kalyan’s comeback film Vakeel Saab. Boney Kapoor had earlier announced that the teaser of the film will be out on Pongal and the fans were eagerly waiting for it to come out. Their wait is finally over as the makers of the film have shared the first glimpse of what the Pawan starrer will look like. The actor is looking dashing as usual and his character looks quite promising already. Vakeel Saab Motion Poster Starring Pawan Kalyan To Be Out On Power Star’s Birthday!

The teaser begins with a shot of a lawyer’s coat hanging in the background.  Pawan’s character who is a lawyer wears the coat with swag and we are introduced to a back shot of him. He is then seen removing a dusty cloth from a table in a library. Pawan is also seen getting involved in action-filled fights throughout the teaser. In one scene, he shouts “Objection, your honour,” and we think that scene is enough to give his fans goosebumps. We are sure the fans cannot wait to see him in this action avatar.

Power Star Pawan Kalyan is all set to return to the big screen after a gap of two years with the film Vakeel Saab. For the unversed, it was two years back when the superstar had said goodbye to films with an aim to concentrate on his political career. Helmed by Venu Sriram, it is the remake of the Hindi film Pink that had starred Amitabh Bachchan in the lead role. Vakeel Saab is jointly produced by Boney Kapoor and Dil Raju. Vakeel Saab: 35 Days Required To Complete The Shooting Schedule Of Pawan Kalyan Starrer?

The film stars Nivetha Thomas, Anjali, Ananya Nagalla in the lead roles whereas Shruti Haasan is portraying a special role in the flick. This movie was initially scheduled to release on May 15 in theatres, but due to the pandemic, the work couldn’t be completed and so it got delayed further. The makers have yet not announced the release date of the film.

(The above story first appeared on Amazing India Blog on Jan 14, 2021 07:25 PM IST. For more news and updates on politics, world, sports, entertainment and lifestyle, log on to our website amazingindiablog,in).