Maharashtra is third largest State of India by area and is the second most populous sub-national entity in the world after Uttar Pradesh. The importance of the state does not only lay in its area and population but it also has a great culture and history which influences the nation. The state is known for its business capital “Mumbai”, its cuisine, its attire, its literature, its film and theater and its music and “Dance”.

The folk dance of Maharashtra which has influenced the Marathi theater and films (including Bollywood) is – Lavani.

Lavani means “beauty” and is a folk dance performed by women, on the beats of “Dholki”. It is mostly performed in the states of Maharashtra, North Karnataka, and southern Madhya Pradesh. During the 18th and 19th century when Maharashtra was facing a lot of battle Lavani was performed to entertain the soldiers and boost their morale. 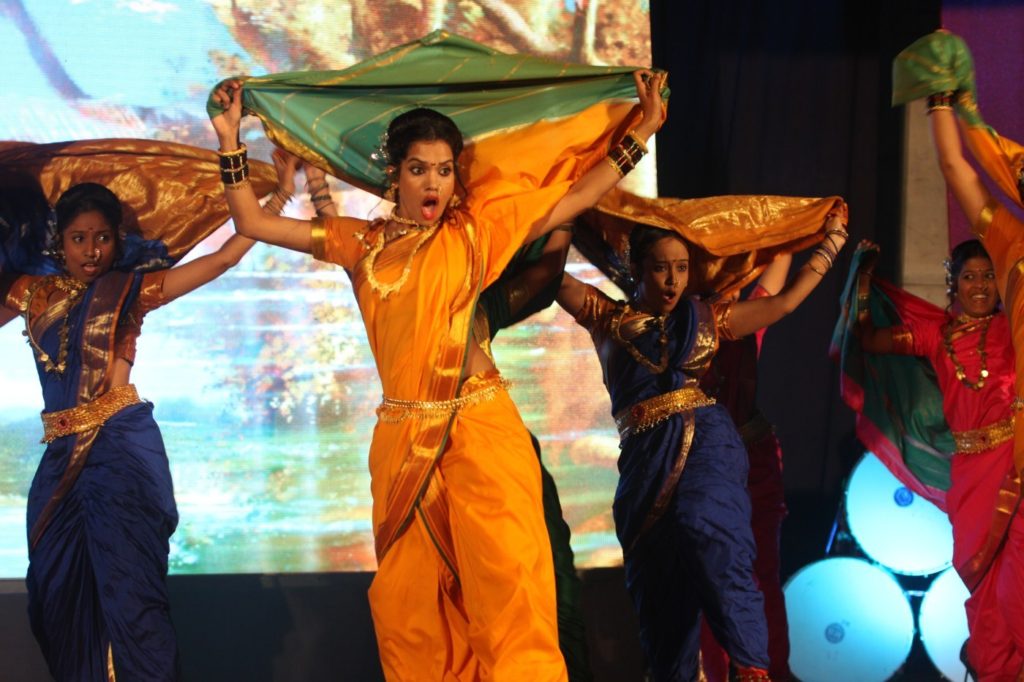 -: OTHER ARTICLES ON REGIONAL DANCE FORMS OF OTHER STATES :-

The Dance and Costume

The female dancers wear “Sari” wrapped in an unconventional manner yet comfortable for them. The Sari is called “Navvari”. Accessories worn are bangles, kamarpatta (worn around the waist), a heavy necklace and a super heavy “Ghungroo” in their feet. The hairs are tied in a bunch or bun called “Juda” or “Ambada”, in Marathi. A large red coloured round “Bindi” is put on the forehead which is distinctive of their makeup.

From being staged during “Peshwas” rule as a motivating dance, to catchy Bollywood numbers of today, Lavani has come a long way. The folk dance saw a lot of change when different poets and singers like – Parasharam, Ram Joshi, Anant Fandi, Saganbhau and Annabhau Sathe significantly contributed. Honaji Bala even replaced the “Dholki” with “Tabla”. They took this folk dance form to new heights.

From been performed on songs which were erotic and explicit and performed only by specific caste women, to catchy Bollywood item numbers performed by leading actresses of the Film industry, Lavani has evolved over the times. Books are being published on the dance form highlighting the state of the dancers performing and the social stigma once attached to it. From being in the Sangeet Baris only to be integrated into folk “Tamasha” form; it’s been re-inventing itself. But Lavani is written every year on different aspects and is performed equally with that power and energy as it used to be years ago.