Top 10 Places to Visit in Jodhpur

Anirudh Singh February 5, 2017 Rajasthan Comments Off on Top 10 Places to Visit in Jodhpur

The second largest and the second metropolitan city of the state of Rajasthan – Jodhpur has a rich and diverse heritage. The city of Rajput Chief – Rao Jodha, also the founder, then strategically located on the road linking Gujarat to Delhi. The city surrounds the Mehrangarh Fort and has other historical significance as well. The modern city of Jodhpur has stretched her but the Old city still carries a lot of historic places, holds within itself stories and tales of the past. It is also known as, the “Blue City” because of the color of the houses located in the old part of the city. The panoramic view of the blue, old city gives the feeling that the fort is surrounded by Blue sky.

Top 10 Places to Visit in Jodhpur

The “Sun City” of the state, Jodhpur, has lots of historic forts and each of them has their own relevance and style of architecture depicting the culture at that specific era. Let’s find out the 10 Best Places to Visit in Jodhpur.

Symbol of Power, Mehrangarh fort is on the top of a 410 feet hill and is a visual delight especially in the night when the lights can be seen from any corner of the city around it. Built by Rao Jodha in 1460, this fort has lots of majestic palaces within its huge thick walls. The view of the city below is panoramic and a road from the city connects the fort.  Fort has comprehensive, intricate carvings on the seven gates, famous “Chhatri” of Kirat Singh Soda, and a museum. Of the seven famous four are – the “Jai Pol” – Gate of Victory; the “Fateh Pol”; the “Dedh Kamgra Pol” and the “Loha Pol”, each one having a historic significance.

One of the last, royal, architectural wonders, of India, depicts the glorious, Rajasthani heritage.  Of the three parts of Umaid Bhawan palace, one is still owned by the Royal family of Jodhpur city. Of the balance, two one has been converted into a museum highlighting the royal age of Rajput and the second into a heritage hotel, managed by the “Taj Hotels”. Foundation laid in 1929 by, Maharaja Umaid Singh was completed in 1943, this palace is also known as the “Chittar Palace” because of the stones used in its construction are from the Chittar Hill. 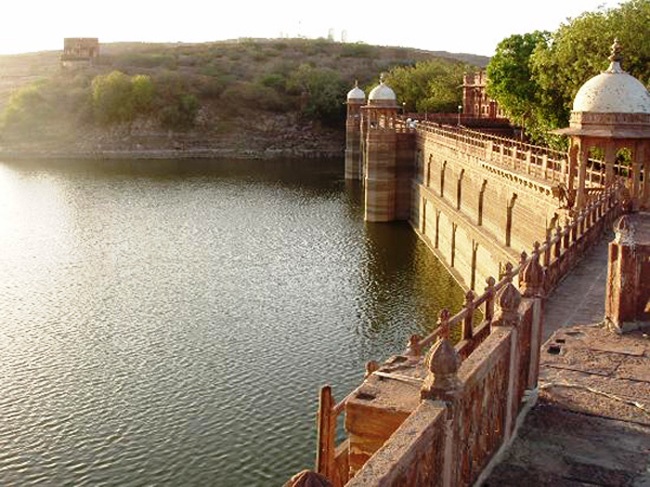 Balsamand Lake is a man-made water reservoir was built by Rao Jodha in 1159 AD and is situated on the Jodhpur- Mandore highway, to fulfill the water requirement of Mandore, the then Capital of Marwar state.  Just 5 kms from Jodhpur this place is a must visit for nature lovers, and has lush greenery around the lake enhancing its beauty, a palace next to lake has charismatic royal touch, gardens, birds like peacock and animals like jackal can be seen. Overall a beautiful picnic spot especially in summers. 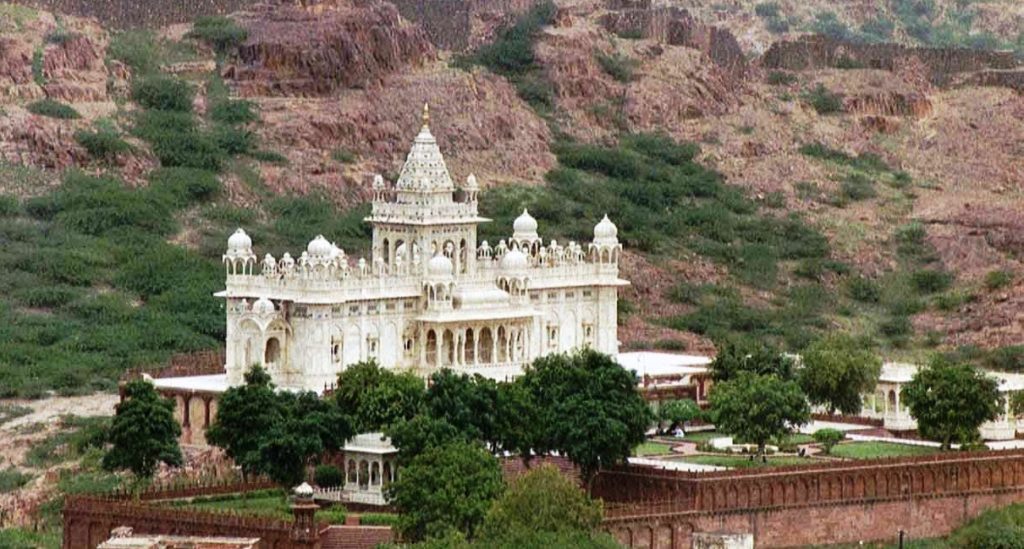 This monument was constructed in 1899 as a memorial in the honor of Maharaja Jaswant Singh. Made of precious white marbles, it is a brilliant architectural masterpiece depicting royal era. The detailed royal memorial has exotic designs all over it and has rare portraits of former Rathore Rulers and a multilevel garden. 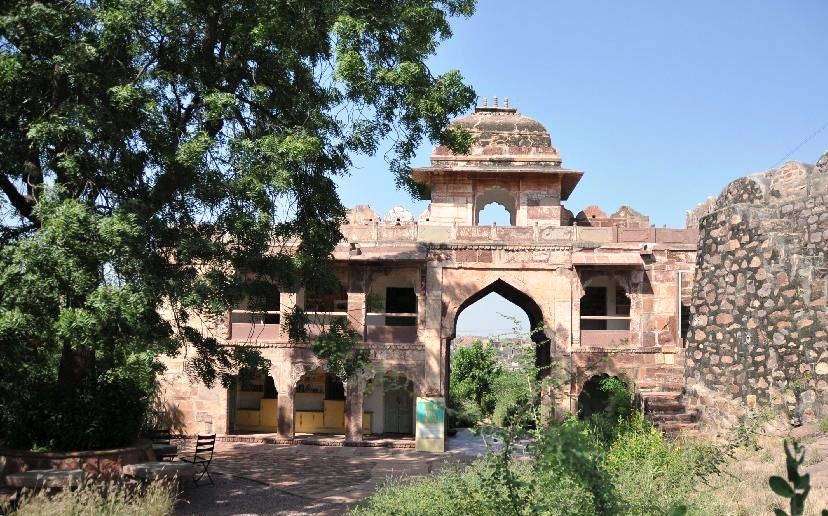 With the objective to restore the rocky trails and the ecosystem around the Mehrangarh fort, Rao Jodha Desert Rock park was created in 2006 and stretches in 200 acres at the foot of the gigantic fort. One can visit and learn more about the rocks and approximately 80 species of plants which thrive in and around the Thar Desert.  It’s a demonstration of the hard work done by the ecologists to restore the ecology of distinctive volcanic rocks and its formations.

Mandore gardens are an extraordinary masterpiece of rich traditional and architectural elegance. It has temples, gardens, and museum. The history of this place goes back to the 6th century when the city of Jodhpur was also not established. It has a Government museum which holds the statues and artifacts of the heroes of Marwar called – “Hall of Heroes”. The gardens have the Chhatris of many rulers, and a temple dedicated to 330 million Hindu Gods. 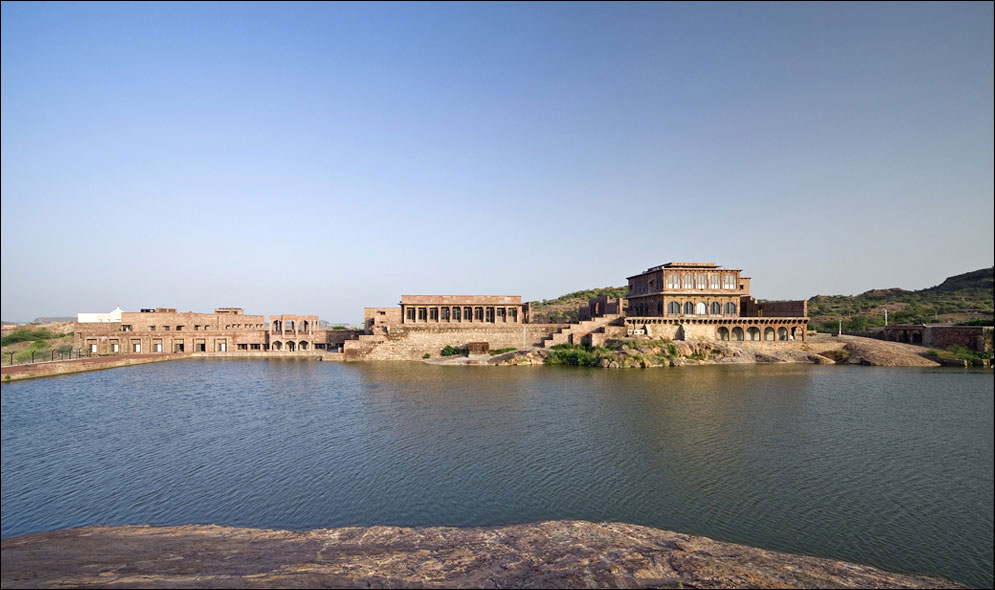 Kalyana lake is the lifeline of the city and other nearby areas for its water supply and is spread across 84sq.kms. Constructed by Pratap Singh in 1872 this artificial lake receives water from “Hathi Nahar” and is the very picturesque spot where a dense green blanket of vegetation can be seen. Migratory birds like Siberian cranes are seen in winters.

8) Tripolia Market- The Market of Jodhpur Visits to Jodhpur are incomplete and meaningless if the famous cloth market of the city – “Tripolia market” is not visited. The famous market has Marwari style shops where the customer sits on the floor and the shopkeeper displays the products. The market is famous for the traditional apparels and foot wears. Lahariya Bandhini, local handicrafts, kurtis, churidar, batik sarees, marble statues, Rajasthani floor coverings and other souvenirs. 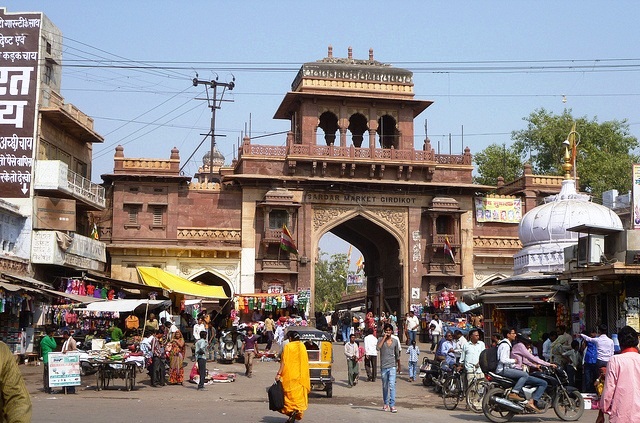 The busiest market, of the city with a remarkable landmark, in the center at the Clock Tower (Ghanta Ghar) is the Sardar Market. Shopkeepers are so fond of their business here that they can show even the last article in their shop and still not forget to offer the – Masala Chai (Tea). One can enjoy the best street food of the city here, and also the best place for roadside shopping.

This is a story of a 350 cc bullet in Pali district, 20 kms from Jodhpur.  People worship this open enclosure of the bullet and pray for the safety of their journey. The story goes by that Om Singh Rathore was riding his bullet when he met with an accident and hit a tree and died on the spot. Police took the bike from the spot only to be found again at the same spot again. This was repeated and was made to believe that it is the spirit of Om Singh Rathore who is behind this. Hence this place is on his.

There are so many other historic places and monuments to be visited and explore the endless never ending the tale of the Rajasthani dynasty. Hope you liked our Article on Top 10 Places to Visit in Jodhpur. Experience the Royal Heritage of Rajasthan On Two-Wheels 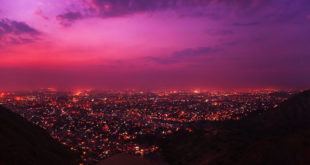