Top 10 Places to Visit in Udaipur

Udaipur is an oasis in the dry heart of Rajasthan. Udaipur means the ‘City of Sunrise’. Maharana Udai Singh founded Udaipur in 1567 on the slope of Aravali hills. The capital of Mewar was at Udaipur which is surrounded by hills and mountains and set on the edge of three lakes. The dream city comprises enchanting lakes, marble palaces, beautifully laid out gardens and old temples. On the south-west of the city is the Pichda Lake and other three sides are surrounded by a wall. It is a palace which enraptures your heart and you would never want to go away from there. Today, we will tell you about the 10 Best Places to Visit in Udaipur.

10 Best Places to Visit in Udaipur

Let us get started with the top 10 places to visit in Udaipur :

Maharaja Jagat Singh II built his summer resort – The Jagnivas Palace (Lake Palace on the four acre) on Pichola Lake in 1754. It is so well designed that it has a beautiful surrounding with water on all the sides and a hill at the back. Further on Maharaja made some additions to the palace to beautify it. It’s balconies and windows overlook the lake which makes a pleasant murmur with its rippling waves and lapping. In the present era, it is a luxury 5 star hotel now. You can enjoy its view by boat, as the admission is restricted.

It is the largest palace in Rajasthan, built in the 16th century is of white marble, situated on the bank of the Pichda ola. It’s construction was started by Maharana Udai Singh, the city’s founder. It is 30.4 meters high and 244 meters in length. One has to pass through Hathi Pole (the Elephant Gate) along the main street of the old city to reach there. There is a Government museum at the city palace and a wing of the palace houses the hotel Shiv Vilas PALACE and Carry Prakash Hotel.

Just Opposite of Jagnivas, on the south of Pichola Lake, on another island is the three storeyed Jagmandir Palace which is the site of celebrations and has a circular dome of yellow sandstone. It was established by Maharana Amar Singh in 1615 and was completed by Karan Singh in 1622. Later on Jagat Singh son of Karan renovated it in 1628-52 era. The palace is built with twelve different stones. Mausoleum of a saint Baba Gafoor and white elephants made of marble are situated on the entrance gate are worth seeing. 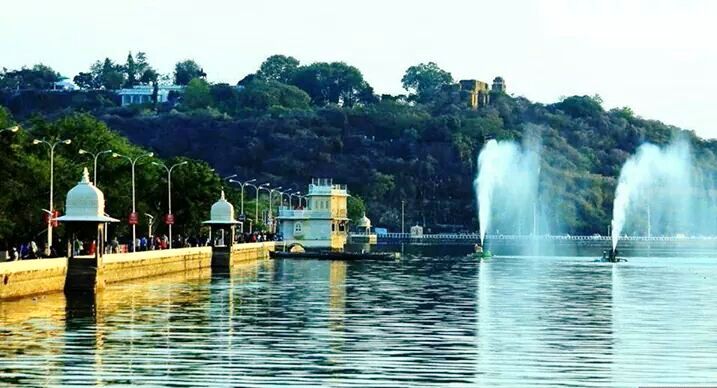 Fateh Sagar is connected to the Pichola Lake by a canal. It was built by Maharana Jai Singh in 1678. When floods destroyed the lake, it was dug by the men of Maharana Fateh Singh at a cost of about six lakhs. The lake is around 2.4 km long, 1.6 km wide and  25 feet deep. There is a car road along the lake. Fateh Sagar’s embankment was named as Rani Road. This elegant lake is surrounded on three sides by hills. There is good arrangement for boating facilities. In past time it was known as the ‘Connaught Dam’.

This beautiful garden, situated on the north-east side of Fateh Sagar was constructed by the emperor of Delhi Maharana Sangram Singh II in 1710-34 AD and presented to as Nazrana. Maharana Fateh Singh (1884-1930 AD) renovated  and extended paintings, mirrors, fountains and cenotaphs work. Princesses with their friends used to come here for relaxation. The main attraction of this beautiful garden is four ponds, where lotuses bloom in profusion, four white elephants and a novel fountain which palters the water drops in a manner giving the impression of rain without rainfall.

Pichola Lake was dug out by a Banjara during teh reign of Maharana Lakshman Singh in the 15th century, on a land of 10 sq. Km . Later on during the reign of Udai Singh it was widened anew. Now the 4 X 3 km wide lake surrounded by low hills, palaces, temples, bathing Ghats and embankments is more alike picturesque lake. It has a few islands jutting from it. The City Palace is on the eastern bank of this lake. The beauty back view of City Palace is indescribable. Inside the lake, Lake Palace hotel, Jag Mandir, Mohan Mandir, Arsi Vilas and a memorial pillar are constructed on Islands. Boating facilities from the city palace’s Banrighat Jetty is available throughout the day.

It is situated on mid island of Fateh Sagar Lake and is spread in about four acre area. Ex. Chief Minister Mohanlal Sukhadia got this beautiful park constructed and named it “Nehru Park”. It is one of the favourite place among the tourists. In the park channel and pyramid types fountains are fitted. In the evening the scene becomes enchanting when these fountains are operated in the multi colour light. Normal and paddle boats are available to reach to the park which is arranged by public worked Department. Rock Garden is situated nearby on its eastern embankment, which has been named as ‘Guru Gobind Singh Park’. People can be seen resting on the green grass and having breakfast.

It is situated on the east side of Fateh Sagar on Moti (Pearl) Magri (Hill). Built with beautiful surroundings, this memorial was completed in 1967. It is  developed as a memorial of Valiant hero Maharana Pratap. On a white marble platform the bronze statue of Rana Pratap on the back of his horse, Chetak is placed on the top of the hill. Hundreds climb the tree lined uphill path to pay homage to Rana Pratap and his faithful horse Chetak who was killed in the battle of Haldighati. There is a Japanese rock garden in the vicinity. A telescope has been installed here to enable you to see around. 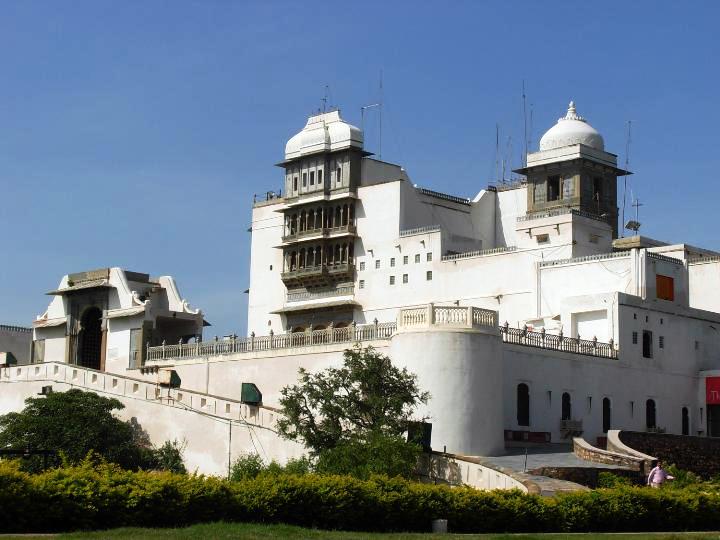 Sajjangarh is situated at West side of Udaipur on a high steep hill of about 152.5 metres, on which stands a striking fortified palace. It was constructed by Maharaja Sajjan Singh in the 19th century. The hill side is thickly wooded and the former rulers maintained this as a royal monsoon and shooting preserve. One can go by jeep up a steep road and enjoy a beautiful view of the city. A Safari park is developed near it which is a prime attraction for the tourists.

The Gulab Bagh or Sajjan Nivas was laid down by Maharana Sajjan Singh on hundred acres of land in 1859-74 AD. It is situated in the old city south-east side of City Palace. In an elegant building which houses Saraswati Library and has a valuable collection of old books. There are more than fifty thousand books in the library on different subjects. The Aravali Express, a toy train is an interesting way of seeing the garden. The garden’s other attractions are : Naulakha Palace and a Zoo where you can see Lions, Tigers, Bears, deers, birds and crocodiles of different kinds.

Hope you liked to know about the 10 Best Places to visit in Udaipur.