Home / Ashrams / 10 Best Ashrams in India for Yoga and Meditation

Anirudh Singh June 6, 2016 Ashrams Comments Off on 10 Best Ashrams in India for Yoga and Meditation

India has been been a famous destination for Yoga and Meditation seekers. Every ashram in India is different from each other, so the first question which comes into anyones’ mind would be which one to choose? This guide to 10 best ashrams in India for Yoga and Meditation will give you the right ideas to choose the correct ashram for you. Our list also includes some ashrams in India free for practicing Yoga. In our previous article, we have already discussed about the best yoga institutes in Delhi NCR.

The word ‘Yoga’ radiates peace and tranquility which is derived from the Sanskrit word ‘Yuj’ that means to join or unite. This union means to unite the individual self with Cosmic Consciousness or the Universal Spirit. Yoga has been in existence from almost 26,000 years as a means of achieving this individual goal. Evolved in India, Yoga is said to have originated during the period of the ‘Sat Yuga’, also known as the Golden age. Sat Yuga was called as a time of immense peace and blessings, which was filled with Eternal Truth seekers. This is the reason why we link or associate Yoga with sages and hermits.

Osho was known to be most controversial spiritual leader of India due to his views about sex. Now, Osho ashram does not hold any workshops for undressing and free love. Still, Osho Ashram has no gender segregation anywhere, unlike many ashrams. The ashram appears more like a resort and provides quite a luxurious environment. Despite the compulsory rule of wearing the maroon robes, it’s quite commercial and distant from Indian culture. Courses offered at Osho Ashram are mostly focused at healing from traumatic experiences, instead of personal development.

Parmarth Niketan is a very popular ashram lying on the banks of holy Ganga in the lap of the Himalayas. It is famous as the largest ashram in Rishikesh wich provides a clean, pure and sacred atmosphere along with abundant and beautiful gardens. It has more than 1,000 rooms, the facilities of which are a perfect mix of modern amenities and traditional, spiritual simplicity. Parmarth Niketan is situated in Swargashram, on the banks of the holy Ganges River. Some of the daily activities at Parmarth Niketan are like morning prayers, daily yoga and meditation classes, daily satsang and lecture programs, the popular kirtans, the world-renowned Ganga Aarti at the time of Sunset, as and Nature Cure & Ayurvedic treatment. Frequent special cultural and spiritual programs also take place. These are usually conducted by revered saints, acclaimed musicians, spiritual and social leaders and others. In addition to the above mentioned facilities, the Ashram also has frequent camps where pilgrims come from across the globe to participate in intensive courses on yoga, meditation, pranayama, stress management, acupressure, Reiki and other well known ancient Indian sciences.

Tushita is a well known centre for the practice and study of Buddhism from the popular Tibetan Mahayana tradition. Located in North Indian state of Himachal Pradesh in the mountains above the town of McLeod Ganj, Dharamsala – the seat in exile of His Holiness the 14th Dalai Lama. Tushita’s main aim is to provide a homely and disciplined environment for people for leaning the teachings of Buddha. They regularly offer drop-in events and courses based on Buddhist philosophy and meditation. They also provide intermediate courses and group retreats for regular and highly experienced students. Tushita Medication Center follows the practices and teachings of Lord Buddha through the medium of spirituality. Visitors at Tushita follow a very simple life and the center focuses on silence as a major part of its teachings.

Established in 1982 by Sri Sri Ravi Shankar, the Art of Living International Center is popularly known over the globe for its stress-elimination and self-development programs which mainly focuses on breathing techniques, meditation and yoga. The Art of Living also take various initiatives that aims towards upliftment of humanity and betterment of the quality of life. The foundation course at this ashram is 3 day program known as Art of Living Part I residential workshop. Here you will be able to learn revitalizing breathing techniques to restore the natural rhythms of body and mind.

The teachings of Sathya Sai Baba, globally recognized by his mop of black hair, mainly focuses on belief in God, living a highly moral life, and helping the needy. The spiritual leader have no boundation on devotees to follow the religion of their choice. People visit in huge numbers to the ashram by the desire to have a glimpse and be healed by an “incarnation of God”. Keep in mind that the rules here are very strict, so be prepared to follow them.

It is widely known as the first and oldest yoga center in the World. The Yoga Institute was started on 25th December, 1918 by Shri Yogendraji. Later in 1948, Yoga Institute found a permanent base in Santacruz, Mumbai. Spread over an area of 1 acre amidst beautiful nature, with three buildings for Yogic activities. This is a totally non-profit organization and has been running on its own strength for over 90 years now. A total of about 1000 persons visit this Institute every day for training, health benefits and consultations. Yoga Institute offers a lot of Yoga courses for all i.e., children, couples and elder people. They have a yoga therapy which mainly aims at improving health conditions like cardiac problems and hypertension, respiratory problems, diabetes, orthopaedic conditions, and stress related problems. Here you can also participate in concentration, relaxation and mind &  memory training through Yoga. People who want to learn Yoga can enroll in teacher training courses for one, three, and seven months.

Started in 1926 by Sri Aurobindo and a French woman called The Mother, Sri Aurobindo Ashram has emerged as a diversified community which has thousands of members. The ashram mainly aims at working towards the creation of a new world, a new humanity. If you’re looking for a quiet retreat haven, this is not really the right ashram for you. It is quite a vibrant center of life which follows a modern urban setting. At Sri Aurobindo Ashram you will find no renunciation of the world. People living at this Ashram spends time each day in one or another of the 80 departments of the Ashram.

This ashram was founded during the 1960s by Swami Dayananda Saraswati, an globally popular teacher of Vedanta and scholar of Sanskrit. It is situated amidst beautiful surroundings, at about 10 minutes walk from the Ram Jhula area in Rishikesh. You can opt for regular courses which are being conduced at the ashram. The Ashrams courses mainly focuses on Bhagavad Gita and the ten principal Upanishads. Vedic chanting is also taught at the Ashram. In addition to other courses, Iyengar yoga retreats (suitable for beginners and intermediate students) are also being conducted at the ashram by visiting teachers. The ashram has over 150 rooms with attached bathrooms. However, only the students studying at this Ashram can opt for accommodation. The ashram does not provide the visitors with a guesthouse.

The Isha Foundation is a well known non-profit organization, established by Sadhguru Jaggi Vasudev in the year 1992. Its main aim is to foster people’s spiritual and physical well being by the means of yoga and outreach programs, like environmental rejuvenation. The core of the activities conducted at this Foundation is a customized system of yoga known as Isha Yoga. The 3-7 day foundation program, called the Inner Engineering, introduces guided meditations and quite a powerful inner energy process for the inner transformation of the person.

Ayurveda Yoga Meditation Resort, Coonoor is a very well known award winning and trusted Ayurveda and Yoga center established in 1950. Situated amidst the popular Nilgiri mountains of south India with wonderful climate and natural settings, the goal of this popular retreat is to bring genuine and authentic experience with Ayurveda, Yoga and Meditation.  The main aim is to follow the ancient Ayurvedic & Yogic traditions of India. They provide excellent care to each and every visitor with personal care.  At Ayurveda Yoga Meditation Resort, you will also get Kerala Ayurvedic treatments for over 100 diseases and ailments. Visitors at this center start off their day with personalized medicines, reviving yoga and rejuvenating ayurvedic treatments. They also get involved in various activities such as learning to live a healthy life and prevention of disease, Organic gardening and healthy cooking. They usually end the day with Meditation for spiritual and mental relaxation.

Hope you liked to know about the 10 Best Ashrams in India for Yoga and Meditation. And the list doesn’t end without mentioning Ayur Yoga Ashram. 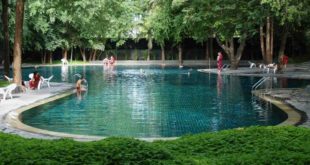 10 Best Ashrams in India for Foreigners