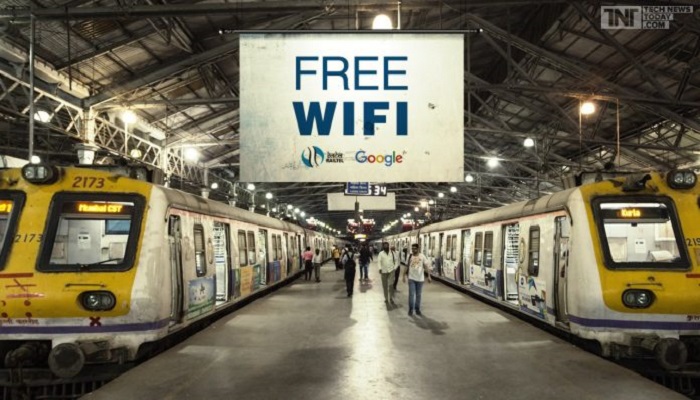 These hotspots are installed under the project named ‘RailWire’. It was launched in the month of January’ 16. Google claims it to be the largest public Wi-Fi project in the world. It works with the data speeds said to be faster than even London and San Francisco, it had once said.

An Indian railway public sector RailTel is assisting Google with the infrastructure, necessary for the project. Initially, the first station which got connected first was Mumbai Central. In a year time, Google had saturated about 100 others stations. It has helped about 15 thousand users daily to get benefit from the services.

It is estimated that more than 80 lakh users are making use of this connection per month. Google claims that this project can help the economy to bring connectivity to everyone, a top official of the company said.

As per the existing plan, users can get mobile data for initial 30 minutes for free. Thereafter, they will be charged a discounted rate. Till now, each session, on an average has found to be consumed about 350 MB of data, Google claimed.

As per the user profile, most of them are in the age category of 19-34, but the helplines are assisting to connect first-timers and senior citizens too if they found some snag. As per a finding of the study, more than half of the users access the network more than twice a day. It shows they are pursuing their work from stations, Google notes.

Encouraged by the success of RailWire, Google has started working on Google Stations concept. That is the use of access outside of railways for the first time in India. It is being done in collaboration with engineering and construction company Larsen & Toubro.

At the beginning of this year, 150 such hotspots were deployed in Pune city to augment its Smart City project. Google is also expanding its Wi-Fi access system to other places under its Next Billion Users venture.

The Indian Railways is also working on a drive to equip over eight thousand stations with Wi-Fi facility by the end of this financial year, i.e. March’19. Their focus would remain on the stations with rural background or settings.

The company says that to set up hotspots in a rural station is much cheaper compared to urban stations in metro cities. A RailTel-DoT joint venture has already installed about 140 hotspots in rural railway stations till now.