Reminiscences of Glorious Past

Depiction of a story, in colourful sketches, in a lively manner through mix of medium  is not new. Ancient to contemporary period offers us glimpses where artists used the medium to paint our emotions on canvas and paper, but imagine the period of Ramayana, when there were hardly any means to carry out such creative outbursts! Madhubani or Mithla Art form’s genesis was the outcome of the creative minds who exploited the medium of art to its optimum, under the royal dictate and thus born the Madhubani Art.

The Early Origin of Madhubani Art

The Mithila, the birthplace of the Madhubani art is the birthplace of Sita too. It is situated in Bihar and is surrounded by the Himalayas, river Kosi, Ganga and Gandak.The story is that Raja Janak of Janakpur was overwhelmed by the preparations of the wedding of her daughter Sita with Lord Rama. 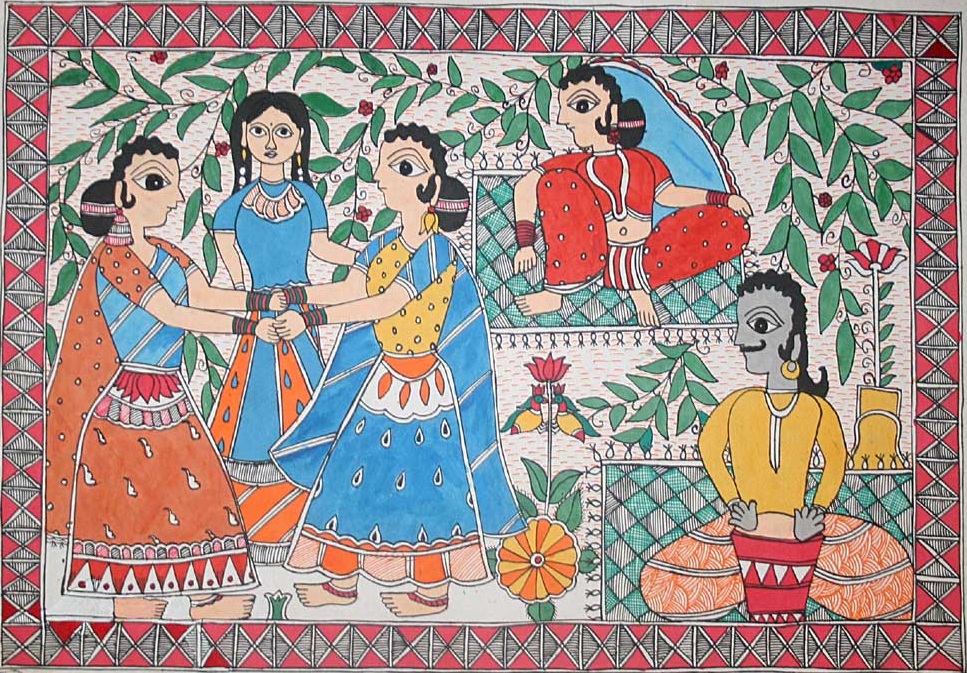 He wanted to prepare his State in the manner that people will remember the colourfulness whenever there will be any discussion on a marriage. He, thus ordered to decorate his terrritory in a beautiful manner by splashing a riot of colors on mud walls in some appropriate theme. Accordingly, artists of the State and everybody interested and skilled in art joined the efforts. The result was that a new form of a beautiful art emerged. The divinity and righteousness of women, which is known as empowerment of womenfolk used to begin to be depicted in that time through this art.

The Genesis of Madhubani Art

The Madhubani art is basically created by a group of artists, led by some senior artist, usually amongst the women artists of the village. These women paints in clusters. Since the area where the art form emerged and boomed is known as Mithila, a part of which is in Bihar and the rest is in Nepal,  these art forms are also known as Mithla art. 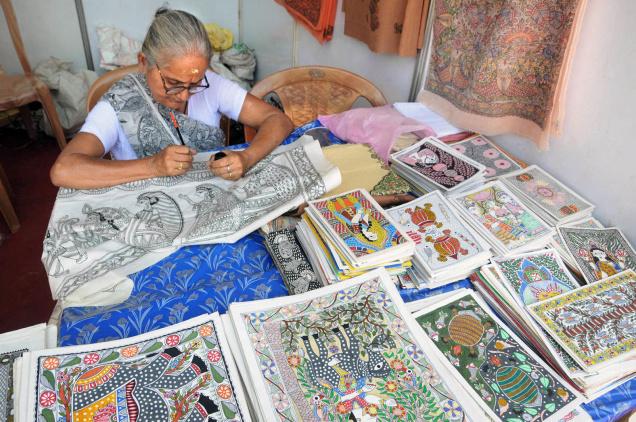 Some people say that Madhubani word can be breaked into Madhu and Ban, means a forest of honey. This shows their longings for the art. Though the art form is known to the area as early as seventh centuries onwards, it flourishes in Ramayan era and then after year 1930.

Impact of British on Madhubani Art

The art loving British officers are also said to be contributed their lot towards the growth of the Madhubani art. Earlier, this art form was more prevalent in the mud walls of the earthern houses. A number of women initially chose the theme of the art which surrounds them like daily chorus, and other activities. Incidentally, this art form gained its importance when the officers see the mudwalls, which were collapsed in a powerful earthquake in Nepal at that time. They felt amused and decided to give impetus to the art by encouraging the groups of women engaged in the creative work. 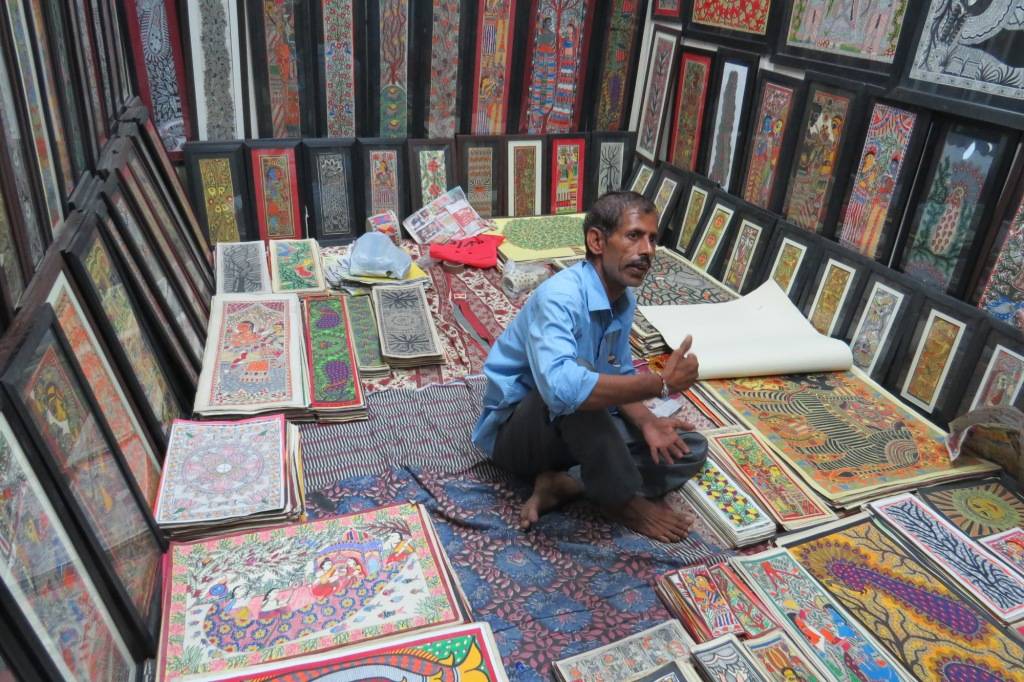 William G Archer, an I C S Officer was one such officer who was the leading soul in giving prominence to the women and the art form. He wrote some articles, a book on the unique form of art of Mithila region and even made a comparison with the paintings of the great artist of western culture,  Piccaso, the Great. Devoting extensive search to the art and artists, Archer used his photographic skills to digitised and circulate the art form to the yet unaware part of the world. His rare pictures of the contemporary Madhubani art forms, in black and white are the national treasure now.

While researching on the subject, it was found that the form was basically practised by the womenfolk of certain castes like Brahmin, Kayastha upper higher castes. A few artwork were also found to be created by Harijan women but they were devoid of colourfulness.

Theme and Colour of Madhubani Art

The  earlier basic themes were based on mythological, folk and spiritual scenario and ultimately revolve to plants, flowers; especially lotus, birds, snakes, different god and deities, story of Ramayana and subjects of women empowerment. Devotion to God, love to God, deities and one’s family, etc. had been the central themes in yesteryears. Later, the themes extended to cover exotic areas of interests too. Traditional village artists used to employ vegetable dye colours in creating wonderful themes, but in the modern times use of synthetic colours is much prevalent.  The colours were extracted from plants and charcoal soot etc. Different colours were produced by mixing different natural substances. For example  Black colour was prepared by joining soot with cow dung. Similarly, Red colour was obtained from flower of Kusum and Blue from Indigo and so on. Though, it is a matter of satisfaction that even after centuries, to be precise from Ramayana era, the artists of Mithila paintings still believed in the coherence and original style of the Madhubani  form of art. They have migrated to the media of canvas, handmade paper and other types of paper as well as pastered walls to create the form. 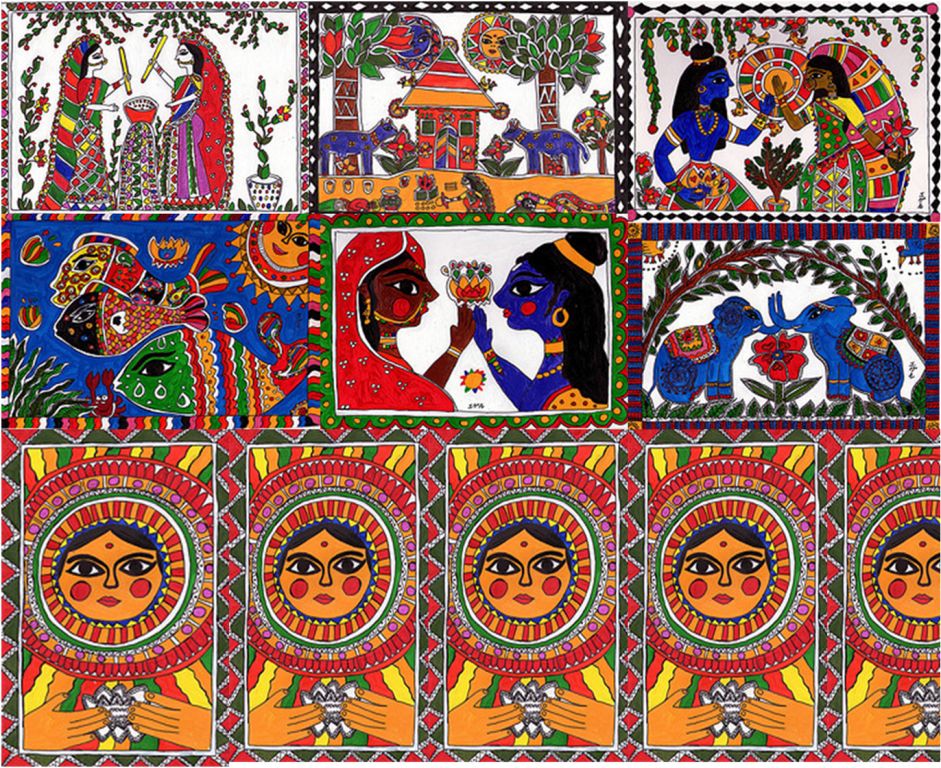 The experienced artists among the team of Madhubani paintings group can explain you the meaning of one and all miniatures, as well as the huge pictures depicted on the media. They can relate the story, tell the meaning of all of its symbolic figures and will always be ready to respond to your inquisitiveness. The connosieurs will travel to the Madhubani village from all the ways, to fetch a piece of masterwork from the little literate or illiterate womenfolk who do not regard themselves arttists. That’s why they never put their so called footprints or watermark on their pieces of art.

To get a piece of Madhubani Art, the best place is Bihar  State Government Emporium, Baba Kharak Singh Marg, New Delhi and other states’ capitals. Besides, Dilli Haat, Taj Festival in Agra and various handicrafts fair in different part of the country also exhibit the art. Some online ecommerce sites too sell these pieces of art but their authencity remains doubtful. So, better buy it from an artist or a local person who can explain its theme and voch for its authenticity.

Hope you liked our article about this amazing Madhubani Art from Bihar. If you have any queries or feedback, you may leave your comments below.