Mavalli tiffin rooms (MTR) is a food enterprise in Bangalore which is almost as much on icon of Bangalore an culture as the adjacent Lalbagh. Originally MTR was only a breakfast and  tea time snack place called the Brahmin Coffee Club serving tea,coffee  and idlis. Whereas now it has turned into a brand of food products. MTR is also the first Indian processed foods company to be certified by the Hazard Analysis Critical Control Point (HACCP) for food safety and hygiene.

It is believed that MTR is the one to bring first ice cream vending machine to India. The restaurant was named ‘Mavalli Tiffin Rooms’ after the locality where it was situated. 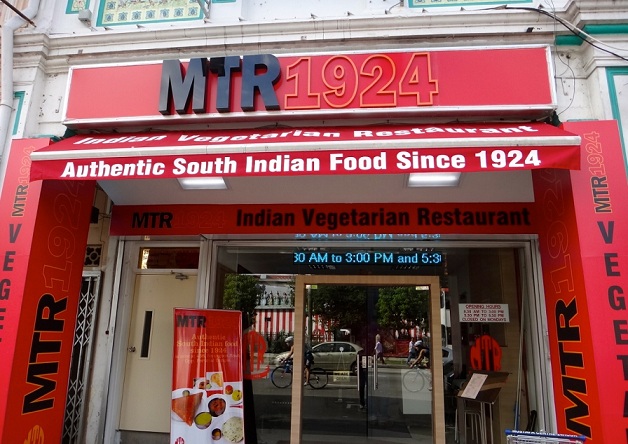 He went to the Europe and was impressed by their cleanliness and discipline of the restaurants there. He then inculcated the same standards in their restaurant to raise the bar. He renamed the restaurant ‘Mavalli Tiffin Rooms’ on the name of the area where it was located. MTR grew in stature and name by 1960 under the management of Yagnanarayana Maiya. In mid 1970’s when India was under emergency, a Food Control Act was introduced which made it mandatory to sell food at low prices. This made it difficult for MTR to maintain its high standards and forced it to diversify into the instant food business, selling ready to eat snacks such as chutneys and rasams.

It became a landmark of Bangalore. He passed away in 1968. The legacy continues with the third generation.At present MTR brand is running two entities- MTR Restaurant and MTR Foods.

It is a pure vegetarian restaurant in Bangalore. The food served here has its origin in the Udupi Brahmin cuisine of the coastal region of Karnataka. The ambience there is outdated and rather very simple because more attention is paid to cleanliness and food quality.

According to MTR, during the second World War since there was short supply of rice they experimented with semolina and thus invented the very popular rava idli. They have a unique feature of serving beverages in silver tumblers. They also hold a record of serving 21,000 customers in 7 hours.

MTR produces packaged foods of different ranges- spices, instant mixes, ready to eat foods, vermicelli, ready to cook gravies, range of frozen products, papads, pickles, chips, snacks and ice-creams. MTR food company is the first in world to have created a frozen dosa which can be heated and eaten right away.

The Mavalli Tiffin Rooms (MTR restaurant) is located on 14 Lalbagh Road, Mavalli near Basavanagudi in Bangalore. It also holds 6 other branches in the city as well as one each in Singapore, Dubai and London. MTR Department Stores stands just next to the restaurant in the Bangalore.

MTR is located adjacent to the very famous Lalbagh in Bangalore which is very easily accessible from anywhere within the city or outside it. Bangalore is well connected through air, rail and road routes which run actively.

Serving Times of the Restaurant

Alcohol is not served. Credit Cards are not accepted.