The Palace of Mysore, known for its splendid architecture and beauty is the official residence of Maharaja of Mysore. Besides courtyards, gardens and the living places, the palace comprises two huge halls—known as Darbar Halls. Facing the famous Chamundi Hills, the palace is situated in the central area of Mysore.

Although there are seven palaces in the city of Mysore, the Mysore Palace is the best and unparallel amongst all of them. Built by the Maharaja Rajarshi His Highness K Wadiyar IV, Mysore Palace is now one of the most famous tourist attractions in India, after the Taj Mahal, and has more than 60 lakhs visitors annually.

Mysore Palace is one of the most magnificent buildings. It is a sight not to be missed when it is illuminated on Sundays and festive occasions. The interior of the Palace is equally worth a visit, for its spacious halls, paintings and architectural beauty.

The royal lineage of the Mahrajas of can be traced with the Mummadi Krishnaraja Wadiyar Maharaja from 1799 to 1868. After the fall of Tipu Sultan,  he made Mysore his capital in May 1799 and focused on education, religious sites and donating jewels to temples including Melkote.  The present Maharaja is Yaduveer Wadiyar, who was adopted by his aunt. 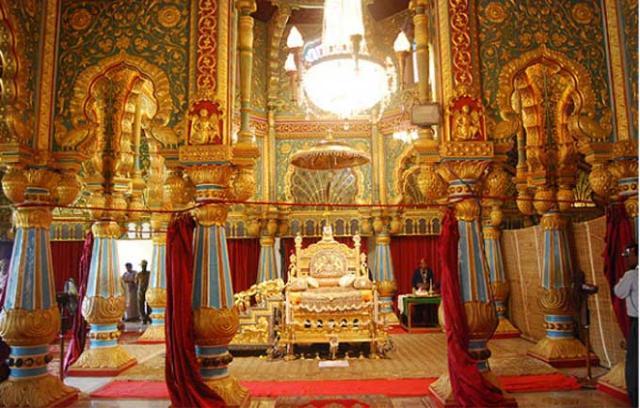 Construction of the current palace was commissioned in 1897, completed in 1912, and expanded around 1940 (including the addition of the present Public Durbar Hall wing) during the reign of His Highness Maharaja J Wadiyar, the last Maharaja of Mysore Kingdom. The construction was completed in 1912, but the fort continued to be beautified and its inhabitants were slowly moved to the newer extension built off the palace.

The architectural style domes of the palace are commonly described as Indo-Saracenic and blends Hindu, Muslim, Rajputs, and Gothic styles. It is a three-stone structure with marble domes and a 145 ft five-story tower. The palace is surrounded by a large garden. The entrance gate and arch hold the emblem and coat of arms of the kingdom of Mysore. 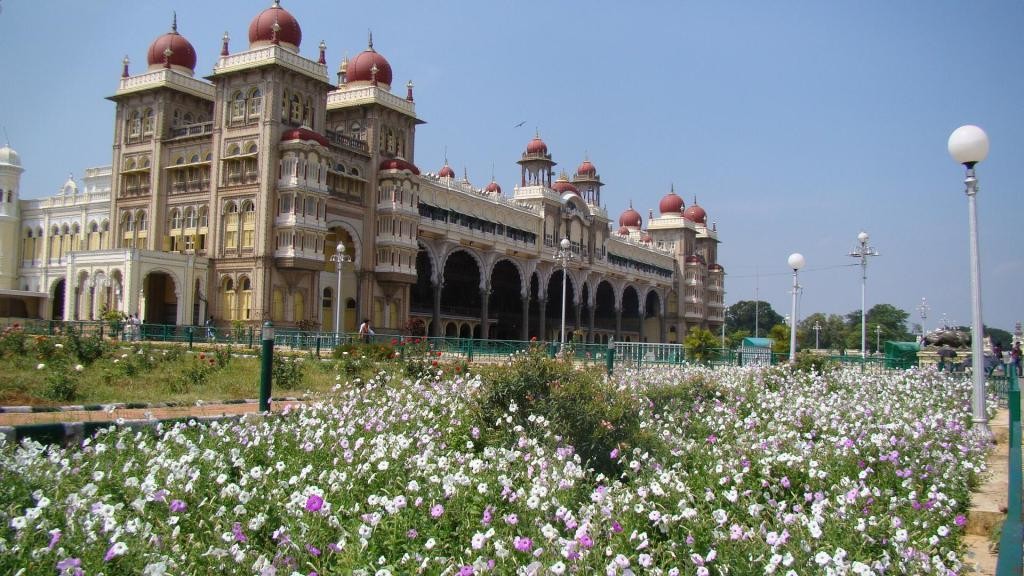 Every autumn, the palace is the venue for the famous Mysore Dasara festival, during which leading artists perform on a stage set up in the palace grounds. On the tenth day of the festival Vijaya Dashmi, a parade with caparisoned elephants and floats originate from the palace grounds. 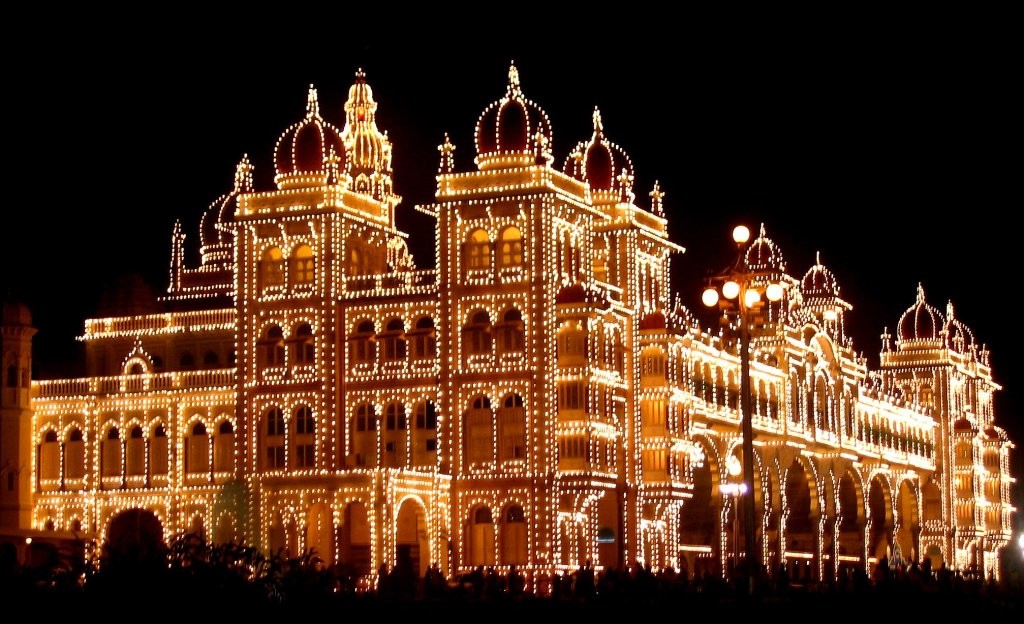 The palace is ten minutes from the city central railway station and from the suburb bus-stand; right behind city bus-stand, and twenty minutes from Mysore Airport. The domestic airport is directly connected to the international airports of Banglore and Chennai.

The Old Fort of the palace stands open from morning 10 to 8  PM and is free of cost. Entry to the palace buildings is between 11 in the morning and 3 in the afternoon, under tight security. Two squads, one police and one paramilitary, stand guard during the day, and two more during night.

Children below seven are free to enter the palace, while those between seven and twelve are charged rupees 25 per head. For adults, tickets are available for Rs. 40. Price of admission for foreign tourists is INR 200. Footwear is removed before entering the palace complexes. 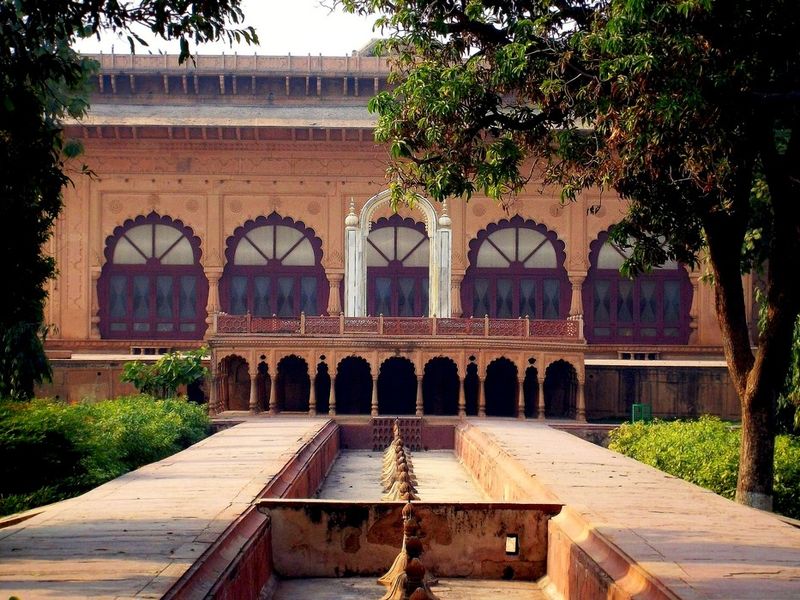 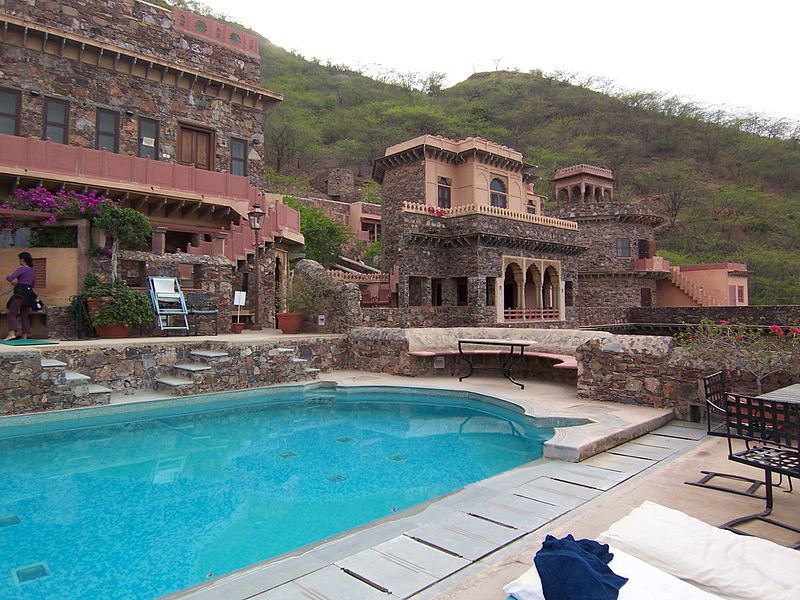 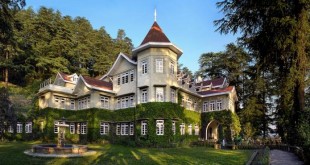