About 60 kilometres away from the city of Bangalore exists the famous ancient hill fortress called Nandi Hills also known as Nandidurg. Nandi hills is a place filled with breath taking scenic beauty, laced with mountains, dew, fog and offers a pleasant climate.

It is believed that the hills are the off origin of the Arkavathi river.

One has to climb 1175 steps to reach this mesmerizing spot. It has become quite popular weekend outing spot for the Bangaloreans.

History and Naming of the Hills

There are many stories associated with the naming of these hills. At first it was called Ananda Giri meaning the Hills of happiness. This name was given during the Chola Dynasty. Later it came to be known as Nandi Hill. Some people say that it was named after Yoga Nandeeshwara as he performed his penance here. Some believe that the hill resembles a sleeping bull (Nandi) hence it is called Nandi hill. Nandi is also commonly called Nandidurg (Fort) because of the fort built here by the Mysorean ruler Tipu Sultan. There is also a theory saying that the name is attained due to the 1300 years old Nandi temple situated on the hill. 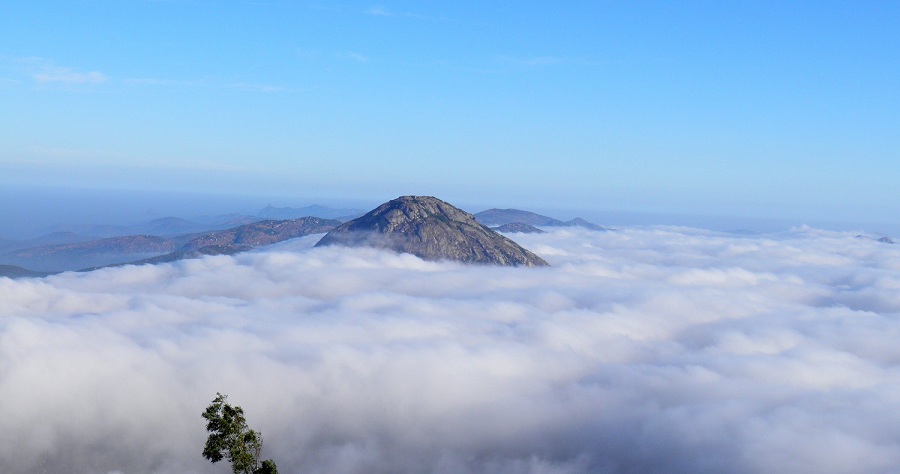 There are actually two temples in Nandi, one is in the village at the foot hills and the other is at the top of the hill.

The Nandi temple at the bottom of the hills was built by who ruled the region in 9th century. This temple is an amalgam of different styles as various dynasties renovated the place. An ancient temple of Yoga Nandeeshwara stands atop the hill.

Nandi hills witnessed the first ever army attack led by Cornwallis against Tipu Sultan in 1791. First Tipu Sultan and later the British used this place as a retreat during the summer seasons. This region was ruled by the Banas, the Cholas, the Hoysalas, the Vijayanagar kings, Hyder Ali and Tipu Sultan and then taken over by the British.

A Boon for Horticulturists & Nature Lovers

Due to the favourable climatic conditions the place attracted horticulturists to experiment with different species of plants. Several species of plants were introduced into experimental garden. Many trees such as Eucalyptus and Coffee Arabica are found here. The place is also a home to various rare species of birds which makes an ideal place of interest for the bird watchers and photographers. The evergreen forest patch on top of the hill is a preferable winter location for many migrant species of warblers, flycatchers and thrushes.

Tipu’s drop – According to the history, this 600 m high cliff was used by Tipu to throw the condemned prisoners.

Horse way – The soldiers used to climb the wall of this doorway on horse back.

Secret escape route – This is said to be a secret passage used by the kings during conditions of sudden attacks.

Summer palace and Fort of Tipu – It is a fort built by Chikkaballapur Chieftains and further strengthened by Tipu. A rest house was built here by Tipu Sultan which he used as his summer residence.

Brahmashram – It is a serene ashram where Sage Ramakrishna is believed to have meditated.

Temples – There are many beautiful old temples expressing devotion and serenity which can be visited.

Lakes and rivers – Amruth Sarovar is a beautiful lake here that brims with lucid water throughout the year. River Palar, Arkavathi and Pennar find their origin from Nandi hills.

There are more recreational activities for enthusiastic tourists. There is a pleasing playground for children amidst the hills. One can also opt for paragliding activities or go for trekking or cycling or just walk through vineyard on the hills.

The hills are located near the new Bangalore International Airport 10 kms from the town of Chikkaballapur and approximately 60 kms from the city of Bangalore at an elevation of 4851 above sea level.

The place is connected to all parts of Bangalore by government buses, it takes 2 hours from Bangalore city and 1 hour from Chikkaballapur to reach Nandi hills. The place is not so far away from the airport crossing. The hills have an 8 km road from all the way to the top. It is advisable to take your own vehicles. 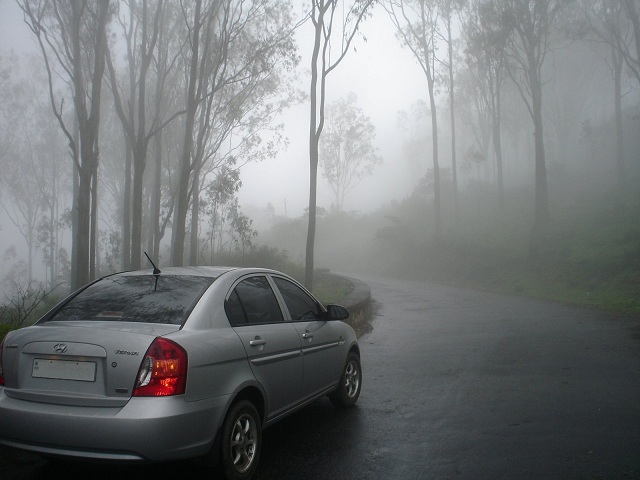 There is an entry gate which is open to visitors from 6 AM to 10 PM.

Rs. 5 per person for entry

Rs. 60 for parking a four wheeler and

The climate of the region remains moderate so the hills can be visited anytime except for the months from June to August during which the intermittent can cause a little bit problem. You can choose to visit the hills at the time of Dussehra. A large number of devotees visit the temples located on the hilltop during this time.

So if you are looking forward for a soothing trip during summer, Nandi hills is the place for you.