Being the oldest church of Bangalore, St. Mary’s Basilica stands erect in the crowded Shivajinagar and yet having a peaceful ambience. It is the only church in the state that has been elevated to the rank of a minor basilica. The formation of the church is dated back to 17th century which was the initial period of Bangalore city formation. Initially the basilica was built as a small chapel, however later it got converted into an ornate Gothic style church.

One of the major attractions of the basilica is the St. Mary’s feast, held every year in September which attracts numerous denotes from faraway places to attend the grand feast.

The basilica was started in 17th century as a thatched hut, built by Tamil Christian migrants from Gingee and was named as ‘CHAPEL OF KANIKKAI MADHA’. The village where the basilica was built took the name of ‘Bili akki palli’ because of the distinct white rice grown here. In 1799 Fr. Jean Dubois led a mass in the church, and got recognized as a Catholic Priest by the people. In 1811, he built a small chapel with a residence for priest. Further Rev. Fr. Andreas an Indian priest of Pondicherry expanded the church building in the shape of a cross.

Due to the communal riots of 1832, the church was torn and plundered. Troops arrived to restore peace to the place. Mother Mary got the name of ‘Annai Arokia Marie’ (Our lady of good health) since she cured the people from a dreadful plague. In 1973, the church got elevated to the statue of a minor basilica through the order of Pope Paul VI and became the sixth church in India to be elevated to this rank.

Layout of the Basilica

The basilica is a 172 feet long and 50 feet broad structure which as a spacious Gothic church designed by a French architect. It is built in the form of a cross.

There stands magnificent and baronial tower which 160 feet high forming the frontage of the Church building is a beautiful statue of Mother Mary with infant Jesus. The basilica is adorned with arches, ornamental motifs and stained glass windows. Multiple columns and tall steeples are viewable from quite a distance.

St. Mary’s feast is prepared in a grand way on 8 September every year to celebrate Mother Mary’s birthday. Nine days, Novena is observed from 29 August to 7 September in which Holy masses are celebrated throughout the day and thousands of people participate with fervent devotion. On 8 September, the day when Mother Mary was born, the holy feast is celebrated. 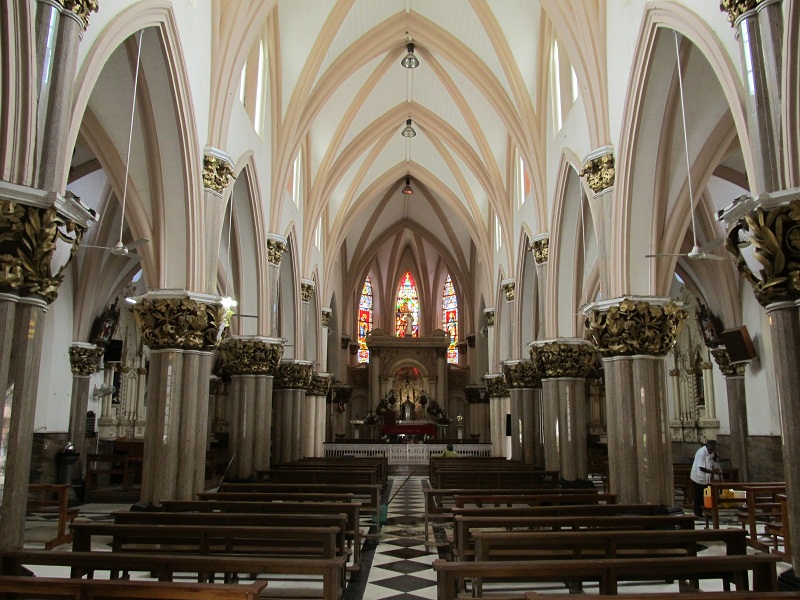 In the evening Mother Mary’s 6 ft statue is carried on a chariot procession with illuminations and decorations across the streets of Shivajinagar.

Bangalore is a city which is very well connected to all major cities of India. It is easily accessible through Air, Rail and road routes. The local transport facilities within the city are also active.

The Church (Basilica) is open for visitors from 6:00 AM to 9:00 PM throughout the week. The masses are conducted in three different languages and the timings of the masses are different according to the languages.

It is a house of the God which can be visited by the devotees at any time any day and the temperature of the city is also moderate hence the place can be visited during any time of the year but visiting the place during the Novena (when Mother Mary’s birthday is celebrated) is going to be a great experience for anyone. During this occasion the place is filled with devotees from all over, the Church and the statue are all decorated and illuminated.