Ulsoor Lake : One of the Largest Lakes of Bangalore

Anirudh Singh April 21, 2016 Bangalore Comments Off on Ulsoor Lake : One of the Largest Lakes of Bangalore

Ulsoor lake, one of the biggest and most beautiful lakes of the Bangalore city derived its name from the locality where it is situated namely Ulsoor. It is renowned for its numerous ancient temple and rather narrow streets. The lake is dotted with several beautiful islands making it an interesting location for tourists. One of the major attraction for tourists here is boating.

This lakes houses different kinds of flowers, birds and insects. The lake is a also frequented by morning and evening walkers.

In his dreams, he saw God Somesvara, who told him about a hidden treasure Kempe Gowda dug up the treasure and from the money, got the famous Somesvara pagoda built in the Dravidian style of architecture. The biggest Gurudwara of Bangalore, Sri Guru Singh Sabha Gurudwara is located on the edge of Ulsoor lake. This splendid Gurudwara was built by A.G Russell in 1943 and inaugurated in 1945. The lake was also known as Halasuru because of the jackfruit orchard in the place (in Kannada jackfruit is called Halasina Hannu). During the British rule, the name was introduced to Ulsoor.

Spread over an area of 123.6 acres, Ulsoor lake is one of the major tourist attractions of Bangalore. The lake is surrounded by abundant greenery which creates a serve atmosphere.

There is a Pagoda dedicated to God Someswara built in Dravidian architecture. The sprawling white Gurudwara attracts numerous Sikh devotees especially during Wednesday and Sundays. The lake has several islands adding to the beauty of the palace. 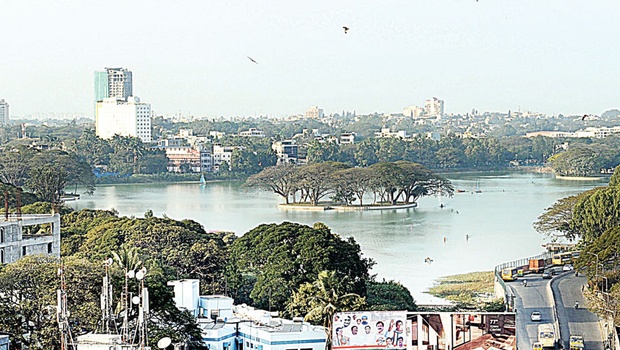 The lake becomes cheerful during August-September due to the Ganesh festival’s grand celebration over here. The lake has fountains that are switched on for a limited time and are a delight to watch. There is also a boat club at the lake, where you can hire cruises with stopovers at some of the islands.

The Ulsoor lake is situated in central Bangalore, and starts approximately near the eastern border of the busy M.G Road.

Bangalore is very well connected to ask other cities of India through air, rail and road routes. Many international flights come directly to Bangalore. The roadways service is very nicely established inside the city. The lake is fairly accessible from any point in the city. There are two metro stations in Ulsoor area from where the lake is easily approachable.

The lake can be visited from 6:00 AM to 8:00 PM on all days throughout the week except on Wednesdays.

No entry fee is applicable on the visitors.