Located near the the very famous Charminar and Laad Bazaar, Chowmahalla Palace has a lot to offer to its visitors. Amidst the lush gardens and sparkling fountains stands a beautiful white palace just like a fairytale fantasy. It was once the seat of Asaf Jahi dynasty and the purpose behind its built was to attend to royal guests and visitors. All sections of the palace are so intricately designed which surprises everyone with its Nawabi charm. The name Chowmahalla/Chowmahallat comes from Persian words. Chahar meaning four and in Arabic word Mahalat (plural of Mahal) meaning palaces.

On 15 March 2010 Chowmahalla Palace was felicitated by the UNESCO Asia Pacific merit Award for Cultural Heritage Conservation. The plaque and certificate were handed over to Princess Esra, the GPA holder and former wife of Prince Mukharram Jah Bahadur.

In 1750 the construction of this Palace was initiated by Salabat Jung and was further completed in 1869 during the rule of Afzal Asaf Jah.

The work of the palace started in late 18th century and over the decades an amalgam of many architectural styles and influences emerged which came to be known as the Chowmahalla Palace. Originally the area covered by the palace was 1,80,000 square metres but what stands today is just 49,000 square metres.

Built over two centuries ago, Chowmahalla Palace is renowned for its unique style and elegance, and is a synthesis of many architectural styles. The architecture of this beautiful Palace has the impact of the Persian, Rajasthani and Indo Saracenic and European styles. The palace constitutes of two courtyards, Southern courtyard and Northern courtyard.

Southern courtyard is the oldest part of the palace and has four palaces-Afzal Mahal, Mahtab Mahal, Tahniyat Mahal and Aftab Mahal and is built in the neo classical style.

Northern courtyard has a long corridor of rooms called Bada Imam which has been designed with ornate stucco and had royal Mughal domes. Known as the heart of the Chowmahalla Palace, Khilwat Mubarak held in high esteem by the people of Hyderabad, as it was once the seat of the Asaf Jahi dynasty. It is essentially a pillared durbar hall with crystal chandeliers and pure marble platform on which the royal seat was laid.

Other important parts include clock tower our the Khilwat clock above palace’s gate. Council Hall which housed a rare collection of manuscripts and priceless books and Roshan Bangla where the VI Nizam is believed to have lived and name comes from his mother’s name Roshan Begum.

How to Reach the Palace ?

Chowmahalla Palace was once considered to be the centre of Hyderabad as it is centrally located in the city. The address of the palace is at Khilwat road of Moti Gali very near to Charminar. It is very easy to reach the palace as it is easily from all corners of the city. A little communication with locals around will guide tourists to the place with ease. Buses, rickshaws or cabs can be taken to reach the palace. Interstate buses are also available from all major cities of the country.

The duration of your visit can be for around 2-3 hours.

Barkat Ali Khan Mukharram Jah, the present Nizam of Hyderabad along with his family started the restoration work of the palace. It took over 5 years to document and restore the palaces of the first courtyard to it’s former glory.

Most of what we see today is meticulously restored work. The old charm of the place has been duplicated as closely as possible.

Chowmahalla Palace as a Party Venue

Today, the palace serves as an exclusive party venue and hosts a lot of corporate parties and other big social events. As you enter, the chandelier-lit Darbar hall the Belgian crystals glittering above and marble floor with mirror polish beneath will mesmerize you. 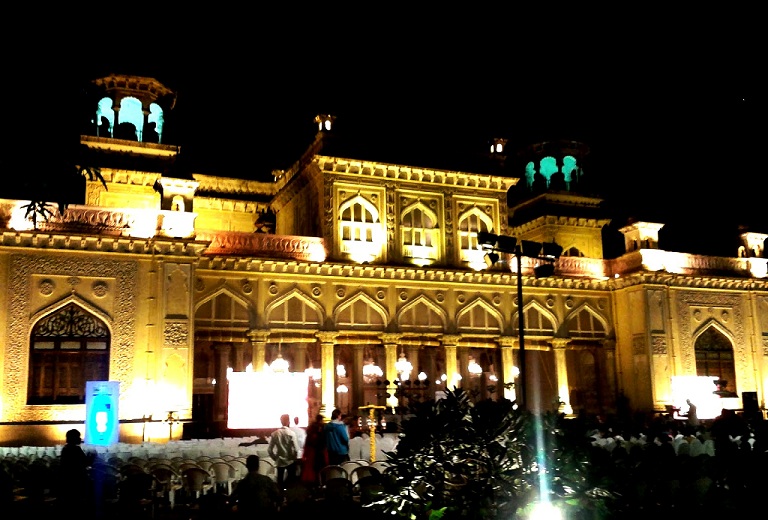 If you are looking for a party location that’s full of history and heritage. It’s a destination that would make every guest of yours feel extra special and makes the evening different, memorable and almost magical.