Hyderabad is a city famous for its exciting and adventurous monuments. One of which is Golconda Fort-a majestic and imposing monument situated at the outskirts of Hyderabad city. This for is one of the primary tourist attractions. This ancient fort of Golconda can enchant you with its history marked with legendary rulers.

Let’s begin with the history behind this grand monument.

It is believed that the construction of this majestic monument started on around 1143 as a mud fort during the Kakatiya Dynasty. The hill was called ‘Golla Konda’ meaning ‘Shepherd’s hill’ after a shepherd boy came across an idol on that hill which was conveyed to the Kakatiya King. The king got a mud fort constructed around the holy spot.

Couple of centuries later in 1518, Quli Qutub Shah broke away from the Bahmani Sultanate and formed the Qutub Shahi Dynasty and declared Golconda his capital. In 16th century,a huge outer wall was constructed around the fort to 11 kilometres. In 1687 Aurangzeb looted and destroyed the fort and left it in a heap of ruins.

The fort shows an intense harmony among the Hindu and Islamic styles A Hindu temple I’d carved out of a huge boulder and a mosque built by Taramati.

The fortress I’d built on a 400 ft elevated granite hill, surrounded by a which is interspersed by 87 semi-circular bastions. The fort has four gateways, and lift bridges, a countless number of royal buildings and lobbies, temples, mosque, stables etc inside. 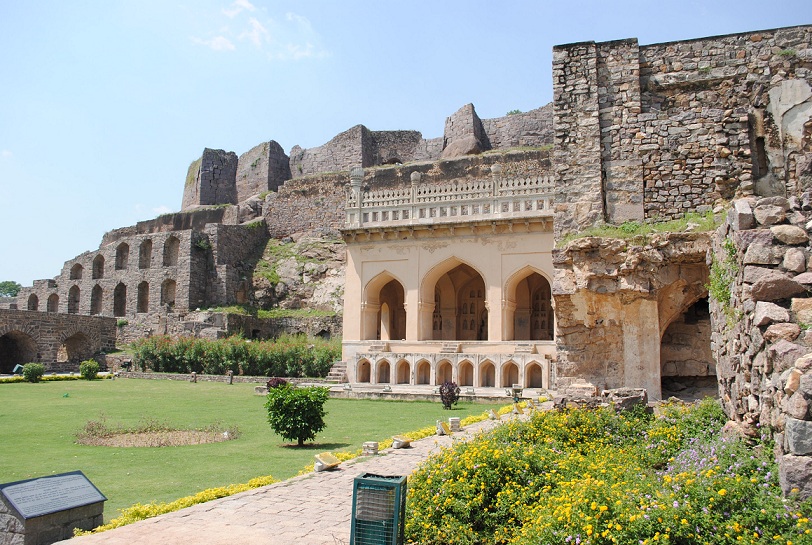 Located on the eastern side, the Balahisar Gate is the main entrance to the fort embossed with scroll work and peacock carvings guarded by statues of mythical beasts and lions.

Fateh Darwaza sequined with giant spikes located on the south eastern side is well known for its acoustic effects. Even a small sound such as the sound of a clap at a certain point, echoes and can heard clearly almost 1000 metres away at the Balahisar Baradari. Other structures at the fort are Silah Khana, Mortuary Baths, Nagina Bagh (now in ruins), Ambar Khana (granary) Bari Baoli (step well). The structures also included Akkanna-Madanna offices, Ramdas Jail, Darbar hall, Baradari, Hammams and Mahals.

Just outside the Golconda Fort is located the Taramati Baradari at Ibrahim Bagh on Gandipet Road which used to be a Sarai before Abdullah Qutub Shah (the seventh Sultan of Golconda) transformed it to a Baradari with acoustic effects so that he could hear the songs of Taramati from the top of the Golconda fort.

Often have visitors and tourists had frightening experiences when they tried to venture deep into the ruins and they believe the fort to be haunted. Among which the most frequent sight is the phantom of dancing Taramati. According to the people, the souls of Qutub Shah rulers still roam in the Golconda Fort. 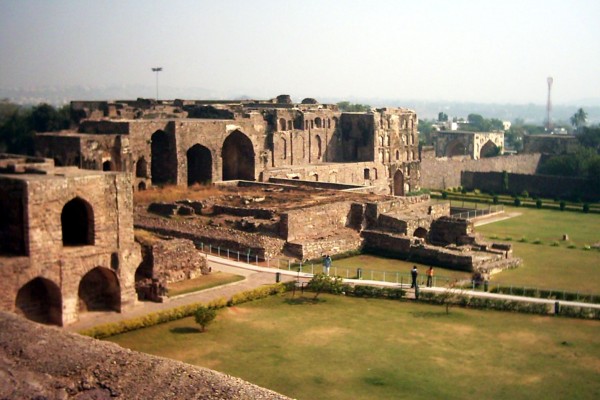 Few shadows have also been experienced by some of the tourists. Often the hurling of utensils have also been felt in Kabootarkhana. Usually these paranormal phenomena are witnessed during night time or after the dusk. Some people feel it to be a sort of publicity stunt to attract tourists.

Many famous and magnificent diamonds are yielded by diamond mines of the Golconda Fort. Among which are the very exquisite and precious Darya-e-Noor, The Kohinoor Nur-ul-Ain, The Hope, The Regent, Wittlesbach, Idol’s Eye and Beu Sancy. 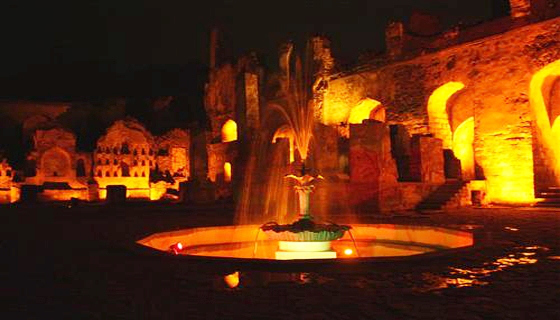 A show that makes Golconda fort all the more attractive is the light and sound show carried on in three languages English, Hindi and Telugu. The show usually starts at 6 p.m in summers and 7 p.m in winters with shows in Hindi held on Tuesday Friday and Saturday, shows in Telugu held on Thursday and English shows held on Wednesday and Sunday. There are no shows on Mondays. If you are at the Golconda fort then it is worth staying back till evening to enjoy the show.

Located in the Ibrahim Bagh it lies on the western outskirts of Hyderabad.

How to Reach the Fort ?

The easiest and most effective way to reach Golconda fort is by local bus. There is no direct bus but two connecting buses which are fast convenient and frequent. Charminar in Hyderabad is an easily accessible place. From Charminar bus station you can take a bus to Golconda Fort. The fort is 8 km from Charminar bus station, it takes you 16 minutes to reach by bus. You can also communicate with the locals who speak in English, Hindi and Marathi.

You can visit the Golconda fort from 9:00 AM to 5:30 PM throughout the week for a duration of around two to three hours.

For Indian nationals – Rs.5 per person, Rs.25 per camera for videography

For foreigners – Rs.100 per person

For light and sound show- Rs.130 per person

Winter months (October to February) are the most pleasant months to visit Hyderabad. The day time temperature ranges from 28 degrees to 29 degrees and the night are cool at a minimum temperature of 16 degrees. In summers the temperature can go upto 40 degrees during day and around 30 degrees at night.