Home / Travelogues / Our Fun Trip to Dharamshala, McLeodganj and some Unplanned Destinations

Our Fun Trip to Dharamshala, McLeodganj and some Unplanned Destinations

This goes back to September 2013 when we four friends went to our first trip to a hill station by driving our own car. The car unfortunately was a second hand car in not too good condition but it did help us travel around the beautiful state of Himachal.

A Travelogue on my Trip to Dharamshala & Mcleodganj

Delhi to Chandigarh : Our trip started at around 2 PM on a Friday which initially was planned to start at 12 Noon. One of my friends came from Meerut to Noida to join us for the trip. He was then picked up from Noida by two other friends (a couple). They came to my place in Delhi (Sarita Vihar) at around 1.30 PM. After a lot of chaos regarding what to carry and what not to, we took off at around 2 PM.  One of my friend who owned the car and was comparatively new to driving, drove initially for a couple of hours to take us out of the city and reach the highway. We then took a tea break in Murthal.

The weather was good and we were enjoying by cracking jokes and having chips and soft drinks in between. Come evening and we let our windows down to get fresh air and of course to save fuel and to get better pick up & speed from our old car (Maruti Zen to be specific).  We lost our way somewhere between Kurukshetra and Ambala at around 8 PM but we asked the local people and they guided us to the correct route. I then took over of the steering wheel since it was night time and I was more experienced when it came to driving. We reached Chandigarh at around 10 PM where had some light dinner. 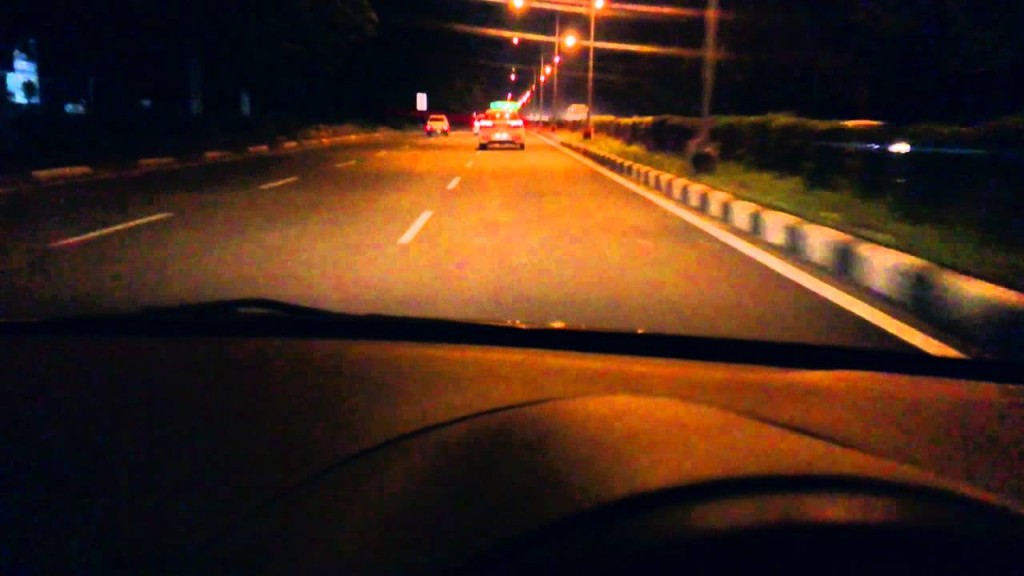 Chandigarh to Hamirpur: We had decided our first stoppage to be Hamirpur,  a small town in Himachal where a very close friend of ours lives. The real challenge started at around 10 PM as the highway was completely dark and we could see only strong glare from the oncoming traffic.  We somehow managed at a good speed without much danger and at the stroke of midnight, the hilly region started. It was a bit frightening to see the tall, dark mountains at 12 in the night with narrow roads especially when none of us had the experience to drive on hilly roads. I drove for close to 4 hours on the roads where we could see no vehicles ahead or behind us. The only thing present was the absence of light on narrow hilly roads. I asked all others to stay awake and alert as it was very late and the roads were risky. At around 3.30 AM we could see some houses and we were happy that we are close to our destination. We did lose our way a couple of times but managed to reach Hamirpur at around 4 AM. Our friend welcomed us by not answering our calls for about half an hour. Finally he woke up by our repeated calls and prepared Maggie for us. We slept almost in the morning at around 5.30- 6.00 AM and woke up at around 11.30 AM. I remember my legs were aching and shivering because of the long drive.

Hamirpur visit and journey from Hamirpur to McLeodganj : Our friend showed us some important places in Hamirpur and hosted a lunch for us in a restaurant. We then left in our car to McLeodganj. We did meet a small accident but fortunately the local people were good enough to let us go and not to create a scene over there.  We covered the distance of 100 Kms in about 3 to 3.5 hours and reached McLeodganj. I did have some sickness due to constant curves on the road. But I was fine and driving again. Our hotel’s approach road was very steep and unfortunately I couldn’t manage to climb our old car up the steep road. But the hotel management helped us and parked the car in the hotel parking. 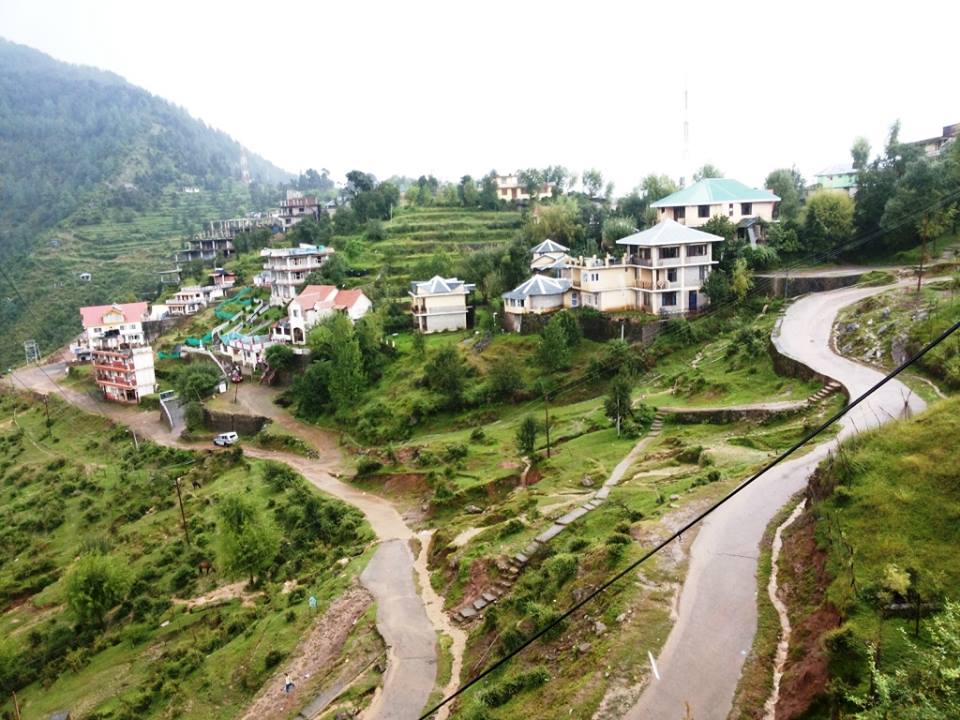 Evening in McLeodganj: After getting our rooms we got fresh and went to the Temple road market. We did some shopping and had some famous local food including steamed momos and thungpa.  McLeodganj is a heaven for shopping Tibetan items like clothes, keychains, showpieces etc. The only thing one might not like is the steep roads. One has to walk a lot on steep roads and it’s very tiring and straneous.

A day in McLeodganj : The next day, considering the roads and rainy weather, our hotel staff advised us to hire a cab for local sightseeing. We hired one after having our breakfast at around 11 AM. We were first taken to Bhagsu waterfall. Although it involved a bit of walking to reach the peak point of the waterfall, we immensely enjoyed the great view of the waterfall. People were getting wet and dancing there. We preferred to enjoy Maggie there. Again, the view was awesome with mountains and trees all around the waterfall. After enjoying there for an hour we went back to the cab and we were then taken to the Dal Lake. We did manage to enjoy the scenery beauty and capture a few pictures before it started raining. 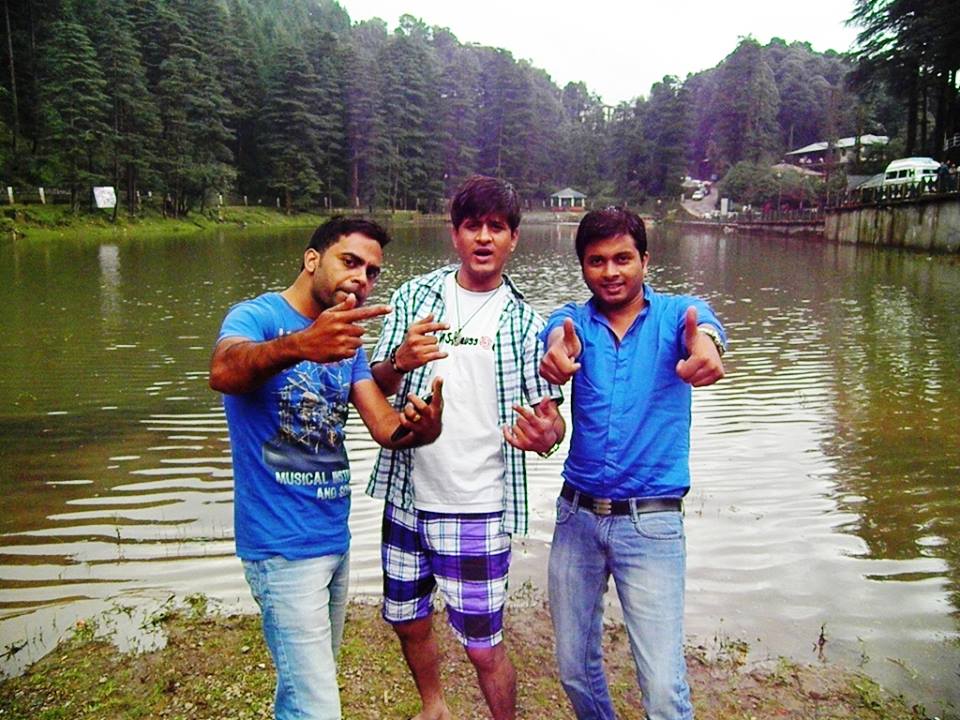 The cab driver took us to a few different spots after that. I preferred to stay inside the car as it was raining but my friends enjoyed by getting drenched in the rains. We then went to Namgyal Monastery often referred to as Dalai Lama temple. We offered prayers and followed the rituals as instructed by the locals there. It is one of its kind of a temple. We had never visited a temple like this before. It had prayer wheels which we had seen for the first time. 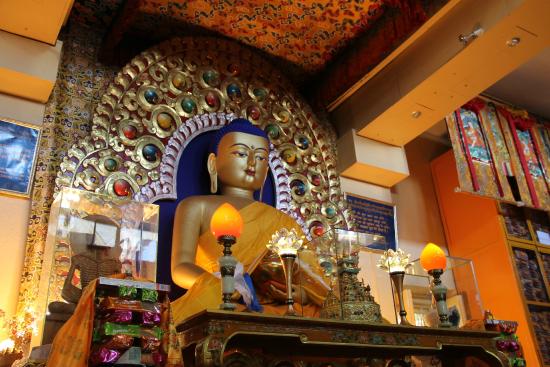 We then moved to the St. John in the Wilderness Church. We sat there quietly and enjoyed the peace while the priest was doing his duties. We also clicked a few pictures outside of the church. We wanted to visit a few more markets but it was raining profusely. We got completely drenched in the rain before we could reach our hotel from the cab. A couple of us relaxed by watching a movie on their laptop while I preferred to do my office work. The traveler inside us was back again at 8 PM. 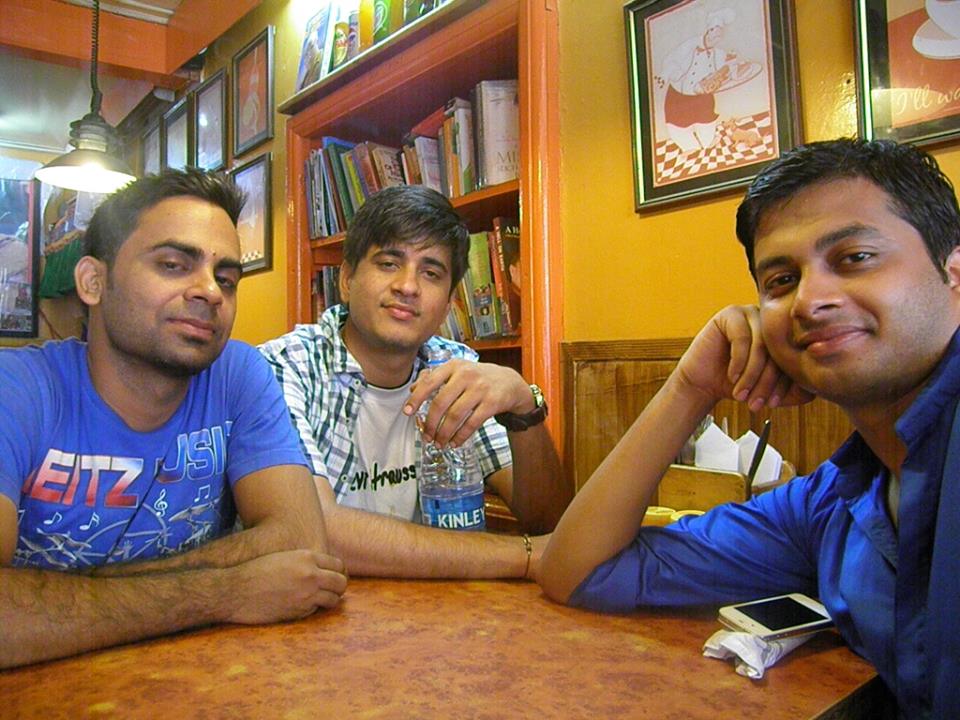 We did some local shopping, had thukpa, momos, soup and golden fried babycorn for dinner. The food was good and the staff was quick and courteous. We then went back to the hotel to have a good night of sleep.

McLeodganj to Dharmshala : Since we had covered the major attractions in McLeodganj we started our drive to Dharmshala at around 9 in the morning. Our main target was to visit the HPCA stadium. We reached the beautiful stadium in an hour’s time. We took some pictures and selfies there. The stadium looks beautiful with mountains covering it all around. Resort in Dharmshala : From the stadium we went to a resort which had the facilities of snooker, swimming pool and other small indoor games. We spent more time there than we had thought of, almost 3-4 hours.  We did swimming, played snooker, had a few soft drinks with snacks. It was almost 5 PM when we started to move from there. 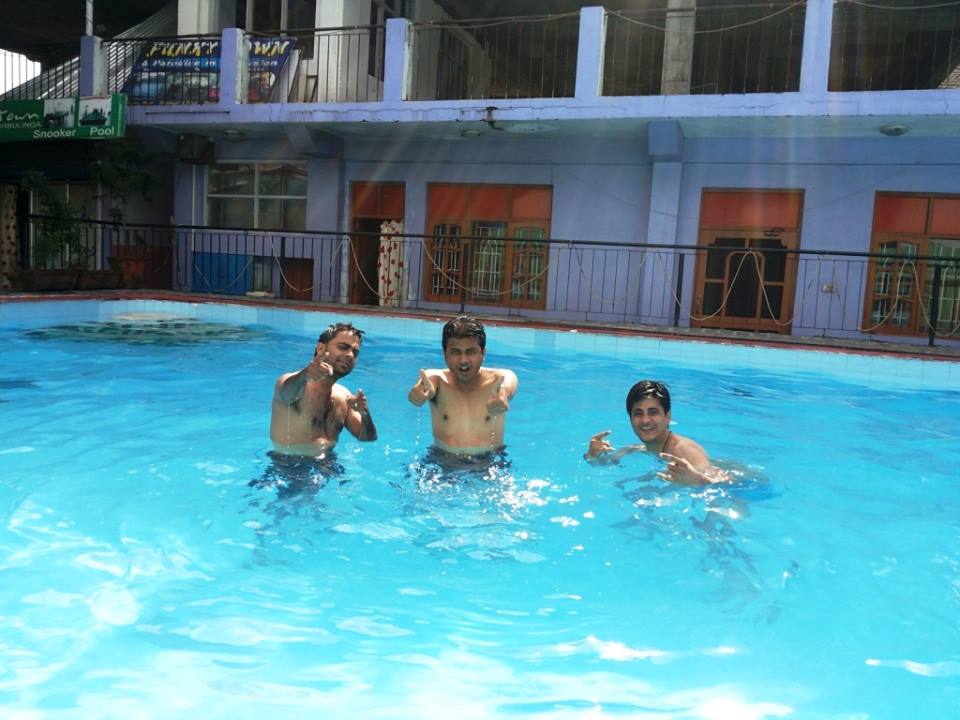 Dharmshala to Palampur : One of our friends was adamant to start for Delhi. But since it was too late and I didn’t want me or anyone else to drive the whole night, we requested him to stay somewhere nearby and start for Delhi the next morning. But he was still insisting to move for Delhi. Me and one of the friends had a plan in mind. 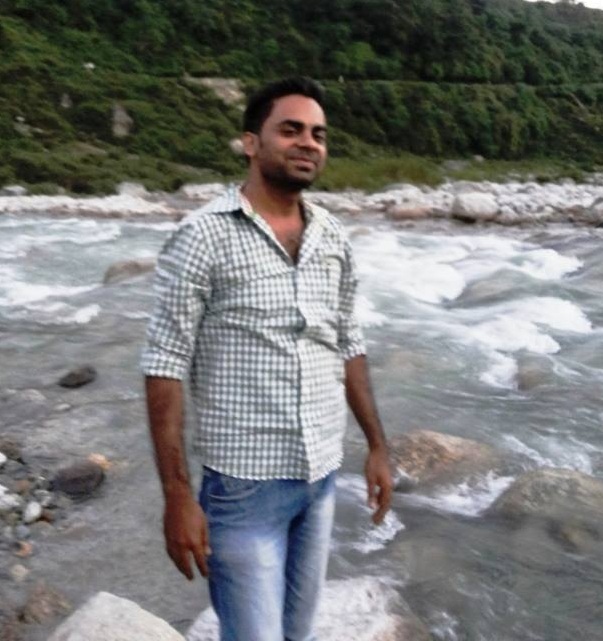 I took control of the steering wheel and drove as fast as I could towards Palampur. The friend who was insisting us to start for Delhi was still not sure where we are heading towards. He was again and again saying we could have been here… or there on our way back to Delhi. We told him we are going to a beautiful place where the shooting of Raja Hindustani movie took place. We covered a distance of 35 kms on a hilly and dangerous road within 45 mins.  We went straight to a small lake where nobody was present except the four of us. We told the friend that this is the place where the shooting of Raja Hindustani movie took place. He was happy that we took him to such a place.

We went and found a good cheap hotel just for the night stay. We then broke the news to our friend that no such shoot took place in Palampur and he was like smiling in anger. He didn’t know how to react as he was fooled by us.  We then had our dinner and slept in our rooms.

Palampur to New Delhi : We started the next morning for our way back to Delhi at around 10 AM. The road we took was in pathetic condition. It almost broke our car and we had to get it repaired mid way. It was not a very good day as a very good and exciting trip was coming to an end. The weather was also very sunny and our car’s AC was not too good. We reached Chandigarh at around evening 6 PM. We started from Chandigarh again after having some snacks and had a good time discussing our experience of the trip. We finally reached near my place in Delhi at around 11 PM. We had many good and bad times on the trip, mood swings, small arguments, mixed emotions, but all in all it was a fun filled trip which we still remember. Moreover it has given us the confidence to drive anywhere, anytime. Hope to see you soon again Himachal, specialy McLeodganj.