Haji Ali Dargah – The Most Popular Dargah in Mumbai

Anirudh Singh July 11, 2016 Mumbai Comments Off on Haji Ali Dargah – The Most Popular Dargah in Mumbai

Standing on a tiny isle, 500 metres off the coast, in the middle of Worli Bay, Haji Ali Dargah is a mosque and tomb, incorporating the tomb of Sayyed Peer  Haji Ali Shah Bukhari, who gave up all his worldly riches just before making a pilgrimage to Mecca. The tomb is built in Indo Islamic Architecture. The structure has while domes and minarets evocative of the Mughal architecture of the period. The stark while structure of the place attracts thousands of visitors daily. The dargah is a known pilgrimage site for muslims and also attracts a number of non muslims visitors to offer prayers and make wishes. People from all over the world irrespective of caste, creed and religious visit the Dargah to offer their prayers and for the fulfilment of their wishes by the blessings of Peer Haji Ali.

Around 10-15 thousand people visit the Dargah daily with the number mounting to 20-30 thousands on Thursdays, Fridays and Sundays ( various Sufi musicians perform devotional Qawwali on Fridays). Lakhs of devotees visit the Dargah on second day of Eid-ul-Fitr and Eid-ul-Zuha.

The construction of Haji Ali Dargah dates back to 1431 to commemorate a wealthy Muslim merchant Sayyed Peer Haji Ali Shah Bukhari who renounced all worldly assets and turned into a saint just before going for a pilgrimage to Mecca. Both the mosque and the dargah were constructed in 1431. Peer Haji Ali had a disturbing dream again and again that he had injured the Earth by his act. 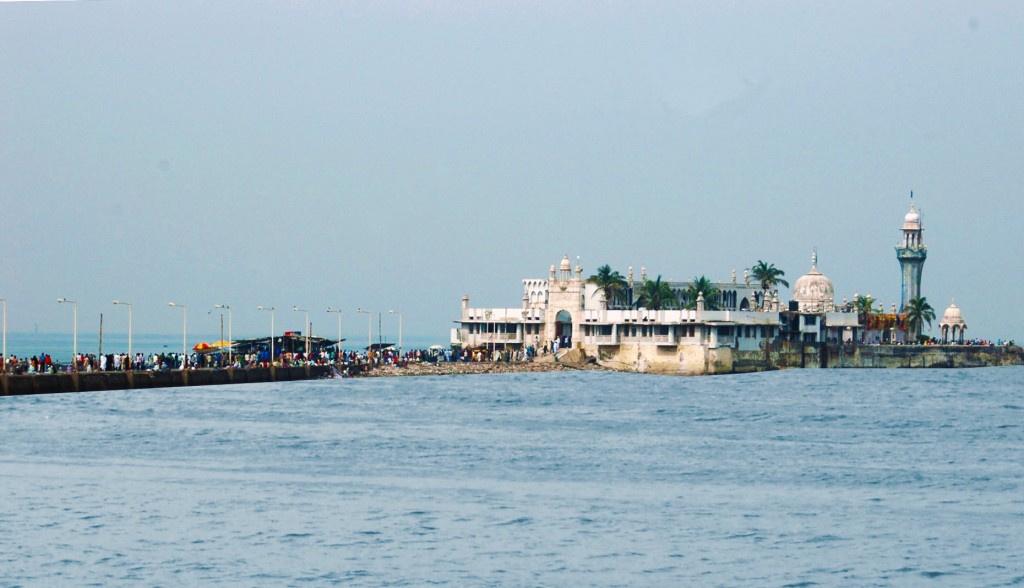 Feeling regretful he directed his followers to cast this coffin into the Arabian Sea. Haji Ali died during his journey to Mecca and the casket carrying his corpse floated back to shores of Worli and got stuck on rocky islets just at the spot where the Dargah is constructed. Another legend also says that Peer Haji Ali drowned in Arabian Sea at the spot where the Dargah stands. People from all faiths visit the Dargah to seek the blessing of the legendary saint.

The death anniversary of Peer Haji Ali Shah Bukhari is on the 16th of Rabi-ul-Aakhir (islamic month). A special program of Milad and prayers is organised by the trust as the rituals. Niyaz ( eatables is distributed to all devotees visitors and Fakirs. 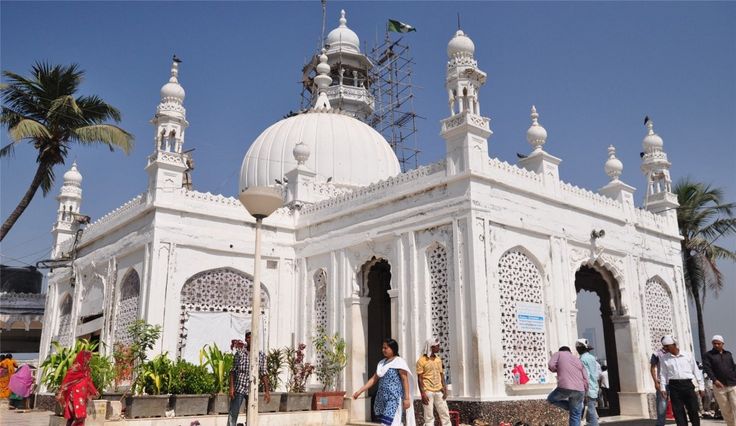 Eid-ul-Milad (Birth anniversary of Prophet Mohammad) is celebrated every year on 12th of Rabi-ul-Awwal by viewing his sacred relics Prayers are recited and Niyaz is distributed.

The complex was erected on a set of high rising rocks housing a mosque along with the tomb of Saint Haji Ali. The sculptured elegant,stark while structure is a great specimen of the Indo-Islamic style of architecture. The complex of Haji Ali looks magnificent having white domes and minarets with endless Arabian Sea in the background. Haji Ali Dargah looks extremely beautiful in monsoon season. The complex occupies 4500 sq m space and the rises to a height of 85 feet. 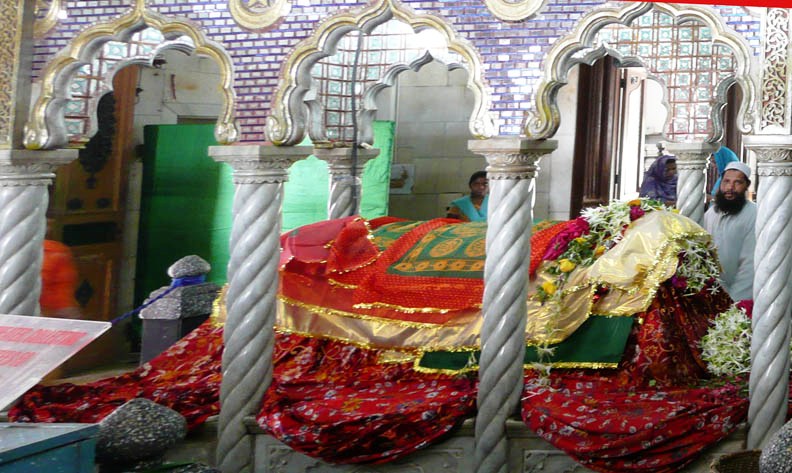 At first as you enter the Dargah, you’ll come across with a marble courtyard and the mosque leading to the central shrine. Artistic marble pillars with mirror work and minarets lookout the shrine in the enter making the structure look grand. The tomb is covered with brocaded red and green cover sheet (chaddar) and is surrounded by exquisite silver frame supported by marble pillars in the hall are adorned with intricate mirror work, (blue, green and yellow chips of glass) arranged in kaleidoscopic patterns inscripted with Arabic patterns which spell the ninety nine names of Allah.

A Walk on the Ocean

As the dargah stands in the centre of the ocean you need a pathway to reach the edifice. The path that leads to the dargah is the Mahalakshmi Causeway,nearly a kilometre long with  Arabian Sea on both the sides. One feels great, walking on the causeway with ocean on both sides to reach the place of divinity. But as the cause way has no boundaries, the access to the monument depends on the tides. During high tides the causeway gets completely submerged and the access to the Dargah is completely cut-off.

Due to the impact of saline winds and 80,000 visitors per week. The six hundred years old Dargah erodes constantly which make it necessary to renovate the monument. The most recent restoration started in 2008 which mainly focused on beautifying the place with white Makrana marble (the marble used huh Shah Jahan for Taj Mahal). The motive of renovation is to keep the Dargah glistening with faith and so that it stands strong for the forth coming years.

The prestigious Haji Ali Dargah is located at about 500 yards from Mumbai shoreline, in the middle of the Arabian Sea off Lala Lajpath Marg, Mahim Bay. The place is at a 6 km distance from the Worli sea link.

It is easy to reach Haji Ali Dargah via rail networks. You can get off at Mahalakshmi Station, Mumbai Central Station or Byculla Station and further you can take local transport to reach the destination. Bus is one of the best ways to reach Haji Ali Dargah. The Dargah is very close to Worli Sea Link which makes it easy to access from Worli or even Bandra.

The dargah remains pen throughout the week from dusk to dawn but your visit depends on the mood of tides.

The is no entry fee required at the Dargah (you can provide donations or your contributions to support the Haji Ali Dargah Trust).

So when get to be in Mumbai, go and visit the magnificent mausoleum standing in the centre of the massive Arabian sea. The stark white structure stands steadfast amidst the overpowering waves. Haji Ali Dargah is not just a pilgrimage site but also an eye pleasing monument with water all around it.