Siddhivinayak Temple | A must Visit Temple in Mumbai

Siddhivinayak Temple : A must Visit Temple in Mumbai

Siddhivinayak temple is one of the most famous Hindu temples in Mumbai. This temple is dedicated to Lord Ganesha and witnesses thousands of visitors every day. It was built in 1801 by Laxman Vithu and Deubai Patil. Deubai patil had no children. She made this temple so that other people can come and pray to lord Ganesha and get blessings from him. Deubai herself prayed to the god that although she herself does not have a child but let others come and get the blessings from lord Ganesha and get their wishes fulfilled. The glory of the temple is of world fame and is known for fulfilling people wishes.

It is a multi angular temple and in the centre is the gold plated dome. Lord Ganesha’s statue is placed in the centre. This Ganesha idol is made by carving a big black single rock which is 750mm of height and 600 mm in width. Forehead of Ganesha idol has one eye in the centre too which resembles the third eye of lord Shiva. Ganesha has four hands as is depicted in this idol. 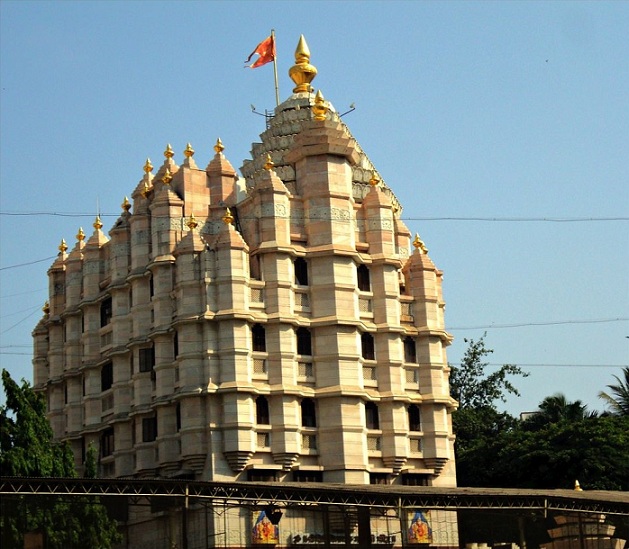 In the upper right hand Ganesha is holding lotus while in the upper left hand he has an axe. Lower right hand has Japmala and in lower left hand he is holding a bowl full of his favorite sweet ‘modak’.  Next to Ganesha statue on either side are the goddess Riddhi and Siddhi who are his wives and symbols of wealth, success and prosperity. Due to the idols of goddess Riddhi and Siddhi this temple was named Siddhi Vinayak Ganesha temple.  The wooden door of the temple has Astavinayak (that is the eight forms of lord Ganesha ) carvings. There is a hanuman temple as well in the periphery of the siddhivinayak temple which was built back in 1952. This is one of the richest temples of India. Millions of rupees in the form of donations are collected every year at this temple.

Tuesdays are the most crowded days of the temple because Tuesday is believed to be a day devoted for Lord Ganesha. On this day people actually line up before the dawn itself in order to get the blessings from Lord Ganesha. On auspicious days like Ganesha Chaturthi the crowd is very huge and the numbers are uncountable. 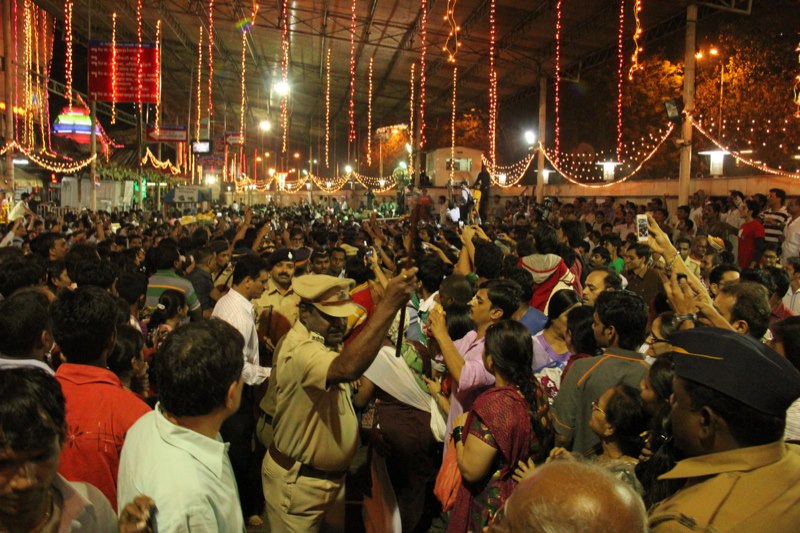 There are several screens placed outside to show the glimpse of Lord Ganesha to the people who do not have much time to stand in the queues to get the Darshan. Looking at the huge crowd that comes here all the essential security arrangement in the temple have been done by the government of Maharashtra state.

What’s around the Temple ?

Just outside the temple compound is a narrow lane which is known as ‘phool gali’ where there are many small stalls that sell flowers, diya-batti, coconut, sweets specially laddoos and modaks, tulsi garlands, etc. that can be offered to Lord Ganesha by the devotees who visit the temple for His darshan.

It is said that earlier on the eastern and southern side of the temple there was a lake to deal with water scarcity of that area but later on that lake was filled and it turned into a big playground now. Also the area of the temple which was earlier quite big has been reduced to a quite a small place. This is because the owner of the temple later sold a lot of temple area to different dealers.

The name and fame of this temple increased surprisingly in 1975 when a lot of devotees started pouring in everyday. There are many big shots that are frequent visitors to this temple such as the politicians, the Bollywood celebrities and many businessmen who come here to seek blessings from Lord Ganesha. The wish fulfilling abilities of this Temple are famous the world over.

As per recent news the trust of Siddhivinayak Temple has decide to donate about 1 million rupees every year to help the children of farmers who have recently committed suicide, complete their studies.

Shree Siddhivinayak Temple trust has also received the ‘best trust’ award for its outstanding and noticeable contributions towards social activities and human welfare.

The temple has its own internet site which provides the facility like online live Darshan of God Ganesha and of this temple, online donation facilities, online Puja facilities, and buying the coins depicting the Lord online. This temple is even ISO 9001 – 2008 certified for its quality management services.

For all those who have never been to this auspicious temple, this temple is located on SK Bole Marg, Prabhadevi, Mumbai, Maharashtra – 400028

Take the bus or local train to reach Dadar. From Dadar, there are various cabs plying on sharing as well as regular basis, available to drop you to Siddhi Vinayak Temple.