It is the most trusted name in hospitality since decades with elegantly furnished luxurious rooms , warm and soothing ambience and a faultless quality of service that make it true epitome of style and comfort guest, feel inspirited by the well equipped spa with trained therapist.

Located 2,000 feet above Hyderabad, this luxurious 5-star Hotel features a blend of colonial and Indian designs.

The Falaknuma Palace was built and furnished by Amir-e-Paigah Sir Viqar-Ul-Umra who was also the Prime Minister of Hyderabad and he was the maternal grandson ofN.H Sikander Jahan Bahar Nizam III of Hyderabad. He used the palace as his private resident until it was handed over to the 6th Nizam of Hyderabad in around 1897-98. In 1897 Mehboob Ali Pasha , the Nizam liked the palace so much that he decided to stay back as this palace was his older sister’s lady Viqar’s residence. He extended his stay to a week then a fortnight and finally to a month, this prompted Sir Viqar to offer the palace to him as Nazar.

The Nizam liked the gesture but, being the grand man he was , as per the royal sources , he paid Sir Viqar about 20 Lakhs and the rest was accepted as Nazar ( offering ). The Palace was used as a royal guest house by the Nizam. The last important guest was president of India, Dr. Rajendra Prasad in 1951. Since then it was mostly kept closed.

In 2000 , the Palace was given to Taj Group of Hotels at lease. It was then opened in 2010 after process being renovated.

It was designed by the Architect William Ward Marrett in Palladian style (Andrea Palladio’s architectural style). Sir Viqar laid the foundation stone for the construct on 3 of 93,971m2(1,011,500sqft). 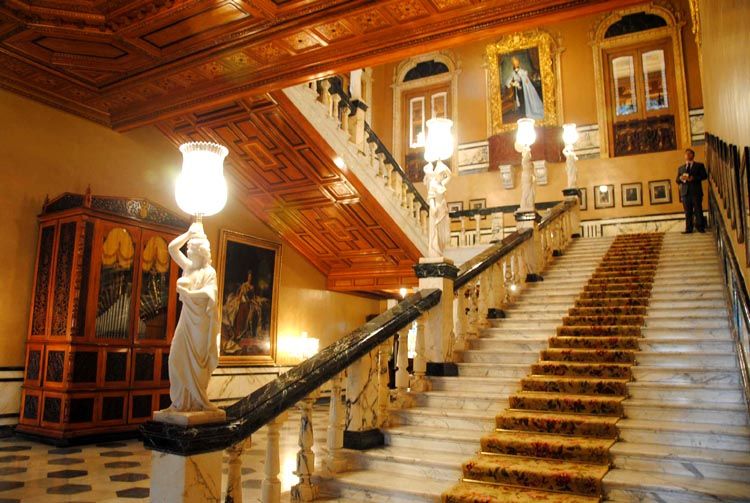 The design of the palace was in the shape of a scorpion with two stings spread out as wings in the North. The middle portion is occupied by the main building and the kitchen, Gol Bangla, Zenana Mehal and Harem Quarters stretch to the south.

A spectrum of colours flows into the rooms through the stained glass windows. A rare mixture of Italian and Tudor architecture is depicted in the palace.

William Ward Marret didn’t just designed a palace, he created a space dedicated to the art of perfecting pleasure. Where billiards rooms, croquet lawns, private gardens, a dining room to  seat 101 quest at the world’s largest dining table, a library,turret rooms, stables terraces with views of the city, a private petrol pump and royal garages filled with a fleet of vintage cars serve to be just some of the known pleasures of this sumptuous royal abode.

It has 60 stunning guest rooms and suites influenced by decades of luxury where grandeur and excess is celebrated and savored in equal measure. Guests get revelled in its large chandeliers, grand marble staircases and bubbling fountains, priceless statues, unique sketches and murals encased in ornate frames, world class collection of crystals and Mughal, Japanese gardens. One of the highlights of the palace is the state reception room, where the ceiling is decorated with frescoes and gilded reliefs.

The bathroom of Falaknuma contains a two ton manually operated organ said to be the only one of its kind in the world. The jade collection at the palace is considered to be unique in the world. The palace library, a replica of the one at Windsor Castle is collector’s every as it is home to the rarest of manuscripts and books. Burroughs and Watls from England designed two identical tables, one of which is in the Buckingham Palace and the other in the Falaknuma Palace. The palace library holds one of the finest collections of Quran in India. The palace underwent a renovation and restoration from 2000-2010.

The interiors have English and Venetion Chandeliere and intricate frescoes. It has a marbled staircase leading to the upper floor with carved balustrades supporting marble figurines with candelabra at intervals. It holds outdoor terraces with rare artefacts including paintings statues and furniture. A famed dining hall with 101 seats and a Durbar Hall adorned with intrically carved wooden ceilings floor with parquetry, walnut furniture and land crafted mirrors.

The Jade Room at the Taj Falaknuma Palace is the ideal venue to enjoy the soothing afternoon tea from an array of choices. The special champagne chocolate tea served here complements the royal atmosphere and the Charminar breakfast makes you relive the mornings of earlier Nizams.

Feel yourself lost amidst the soothing atmosphere of Hookah lounge as you relish yourself with a wide selection of flavoured Hookah’s. There are tangy flavours of cocktails and wines from domestic and foreign brands at the wine list bar. Adaa provides a mouth watering range of food items from luscious Indian cuisine.

Treat your taste buds on the exotic Italian and Mediterranean fare at Celeste- the multi cuisine restaurant. Have a Nawabi style dinner at Shikaar Ka Khaana Barbeque Restaurant. Rotunda is the restaurant on lush tropical gardens, which serves delicious and healthy leafy salads and chilled starters with a poolside ambience.

How to Reach the Palace ?

Taj Falaknuma Palace is located at a distance of 15 km from Sikandrabad Railway Station and around 17 km from Rajiv Gandhi International Airport, near Engine Bowli in Hyderabad.

It offers easy accessibility to places of attraction such as Mecca Masjid ( around 4km), Nehru Zoological Park (around 4km), Charminar, Taramati, Baradari, and Salar Jung Museum during the stay.