Maula Ali Dargah : A Real Gem on the Hilltop

Anirudh Singh February 23, 2016 Hyderabad Comments Off on Maula Ali Dargah : A Real Gem on the Hilltop

Hyderabad offers a lot of sites of religious believes. One such place is the Maula-Ali Suburb which is known for its Maula Ali hill. On the top of this hill stands the Maula Ali Dargah mosque built to honour Hazrat Ali. It is believed to be built during the Asaf Jahi era. Maula Ali is a cluster of hills that is identified as one of the 11 heritage sites of Hyderabad by the the Heritage Conservation Committee of Hyderabad Urban Development Authority (HUDA).

Maula Ali Dargah : A Real Gem on the Hilltop

There is a hillock opposite to the Maula Ali hill, called the ‘Qadam-e-Rasool’ which is supposed to have the sacred relics of Prophet Mohammad deposited by Mohammad Shakrullah Rahan a servant of Asaf Jah. It takes nearly half a day to explore the three connected hillocks here. It’s interior is decorated with thousands of mirrors.

It is believed that Maula Ali has been in existence since megalithic times. It is believed that a minister named Yakoob in Ibrahim Quli Qutub Shah’s court had a dream in which Maula Hazrat Ali, knelt and bowed by putting his hands on a rock thrice. Maula Hazrat Ali, the son in law of Prophet Mohammad is the first Imam and successor to Prophet Mohammad according to Shia Muslims. And the Sunni Muslims consider him the fourth Khalifa. Minister Yakoob then started looking for rocks locally and was guided to this hill. He noticed the palm impression on the rock. He got the impression cut out and installed in a shrine.

Later on a mosque was built here by Ibrahim Quli Qutub Shah which he named ‘Maula Ali’. The Nizams used to visit the place frequently. During this time the Maula Ali Kaman was built to welcome the Nizam and his troops.

People from all faiths (mostly Shia Muslims) and all over the country come to take blessings at the dargah. The Maula Ali Dargah is visited by thousands on the birth celebration of Maula Hazrat Ali. In the olden days, a camp for the pilgrims used to be put up at the lake below. 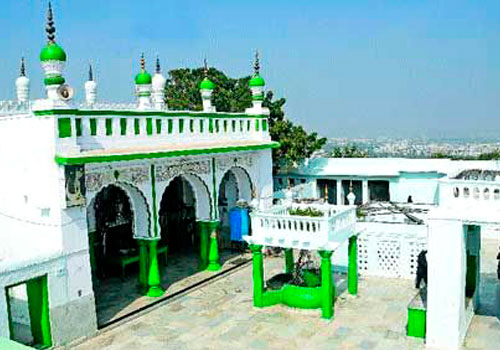 Maula Hazrat Ali is known by many names of which ‘Mushkil Ko Shah’ is a one meaning ‘ the rescuer from the sufferings’. People of all faiths frequent Maula Ali to pray and seek help when in problems. A mannat lock is put at the entrance and after their problems are resolved, people return to the dargah to offer prayers and open the lock.

Excitement for Trekkers and Climbers

Trekkers can go up the hillside as Maula Ali has a rocky, undulating terrain. The 550 steps to the dargah are not very sharp and all the five Kamans can be crossed in less than 45 minutes. 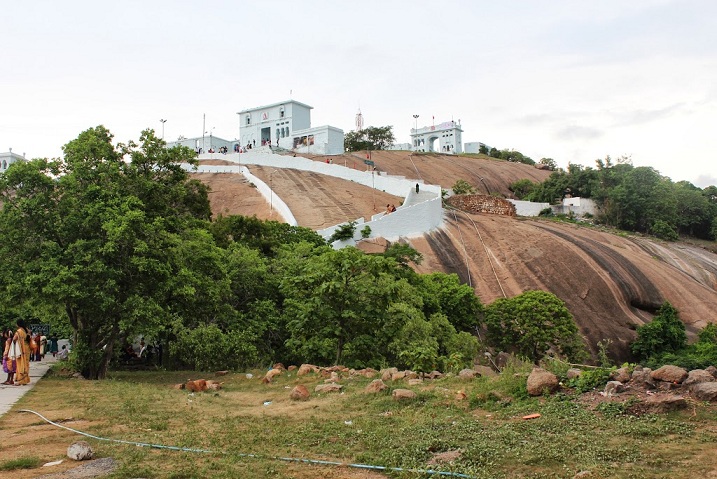 The view at the fifth Kaman is magnificent. Gun Rock, Mahindra hills and Ammaguda Hill are all visible. Rappelling is also done here as the spot is 200 ft above the ground. Step climbing practised at Maula Ali dargah is the best intensive exercise.

Maula Ali Dargah is located on the top three Maula hill of a suburb of Hyderabad about 10 kilometres from Secunderabad.

Maula Ali is located adjacent to Kushaiguda bus depot and a railway station is around 2 kilometres from the centre of the suburb. Maula Ali is well connected with buses operated by Telangana State Road Transport Corporation.

You can visit the pious hill from 8:00 AM to 10:00 PM throughout the week. There is no entry fee applicable for visiting the Dargah.