Anirudh Singh August 15, 2016 Travelogues Comments Off on A Quick Trip to Jaipur – The Capital of Royal Rajasthan

Rajasthan is the royal state of India with an extremely rich history. Jaipur, the capital of Rajasthan is one of the most visited tourist destinations in India not only by Indian Tourists but also by a huge number of foreign tourists. This travelogue is about my short trip to Jaipur in October’ 2015. Although, it was second visit to Jaipur but I enjoyed it thoroughly within the short span of just 17 hours.

This is how it all began !

My friend and I was planning for a short trip to some nearby place. As always we were very confused to finalize a place. Some days back I read and wrote some articles about the haunted Bhangarh Fort and nearby places. So, after about 2 hours of discussion I convinced my friend to visit Bhangarh with me. 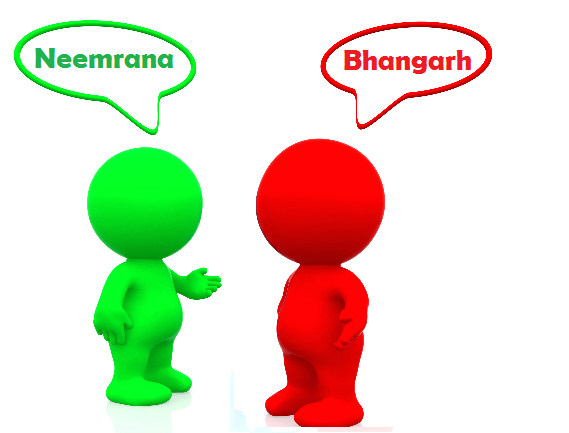 We moved from my friend’s home by my Maruti WagonR at round 7:00 pm which we already knew was quite late. After about half an hour (at about 7:30 pm) or so my friend asked me if we could visit Neemrana Fort Palace instead of Bhangarh. We both knew that it was dark and no one is allowed to enter Bhangarh Fort after it gets dark. On mutual decision, we planned to visit Neemrana.

As expected, the traffic was high during the evening hours and it took us almost 2 hours to cross Delhi and Reach Gurgaon. From Jasola we moved towards Hauz Khas via Nehru Place & Greater Kailash and reached Gurgaon Toll at about 9:30 pm.

FYI : My friend has parceled some Kebabs and I ate few of them while driving. Couldn’t stop as it was already getting very late. Once we crossed the toll and stepped on the Delhi – Jaipur Expessway, there was no looking back at all. Neemrana was about 90 km from Gurgaon and my friend I was still not 100 % sure about whether to stay at Neemrana or not. As we reached Neemrana at about 10:45 pm, we stopped for a refueling the card and finally decided to move ahead to Jaipur instead. We left Neemrana for future visit!

Our Stay at Jaipur As soon as we entered in the City, we looked for a hotel room. We were lucky we got one quickly(Hotel Hariyana Palace) in just Rs.900 with AC. At about 12:45 am parked the car and moved into the hotel with our hand bags. We were quite tired and soon after a small chit chat we went to sleep.

The very next morning we woke up and asked the Hotel guy about the nearby Tourist Attractions of Jaipur and planned for a visit to City Palace, Jantar Mantar & Hawa Mahal first as all these 3 places are in close proximity to each other. After finishing off with these 3 we planned to move towards Jal Mahal and Amer Fort.

We woke up in the morning at about 9:00 am, had breakfast, packed our bags, had breakfast and checked out from the hotel at 10:00 am. Our first destination was City Palace, the most beautiful palace of Jaipur. If you are on Jaipur Trip and you didn’t visit the City Palace, you are really missing out the best attraction of Jaipur. 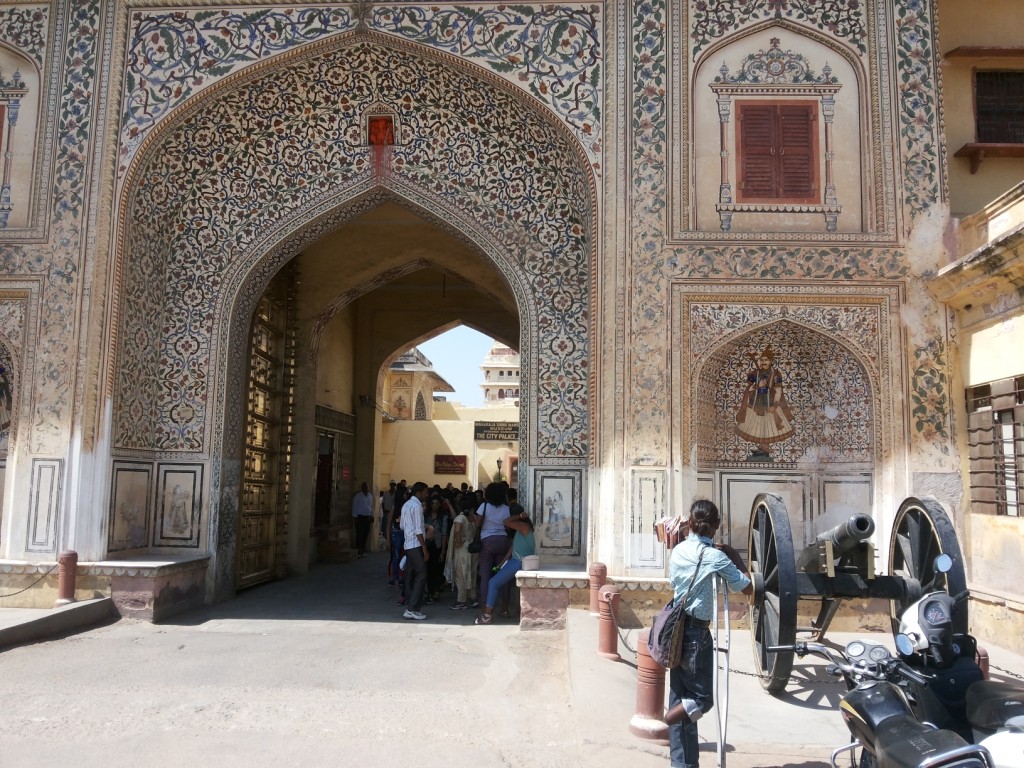 This is how the City Palace Entrance looks like i.e., with beautifully carved marble and stone work done by hands. Just before you enter the City Palace, you will find a lot of pigeons and people feeding them. You will also find several stalls selling pigeon food and handicraft items as well. 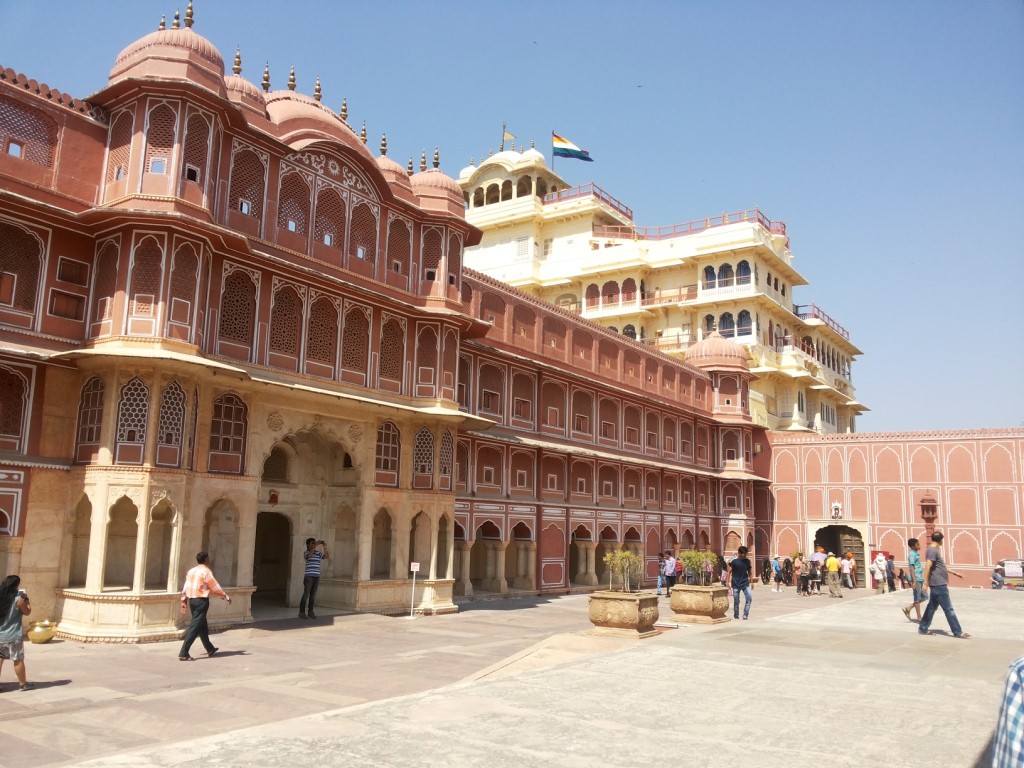 We wanted to spend a lot of time here at the Diwan-i-Khaas as the atmosphere and the architecture of the place was wonderful. 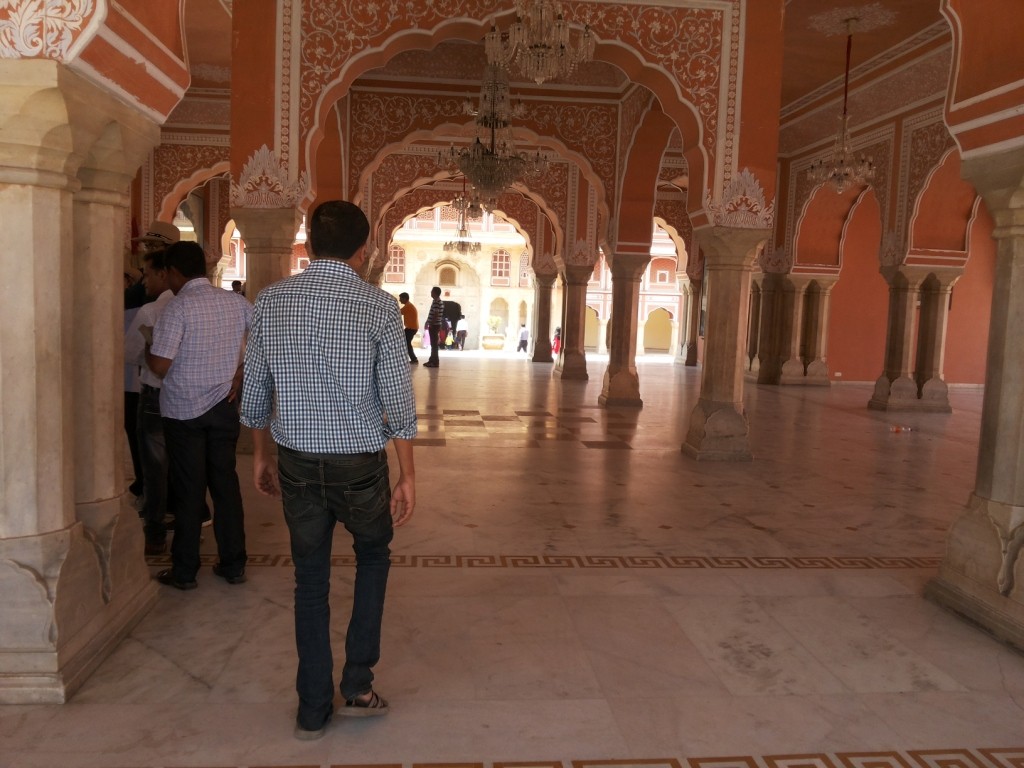 These cannons kept at the City Palace have strong history associated with them. Captured a few of them! 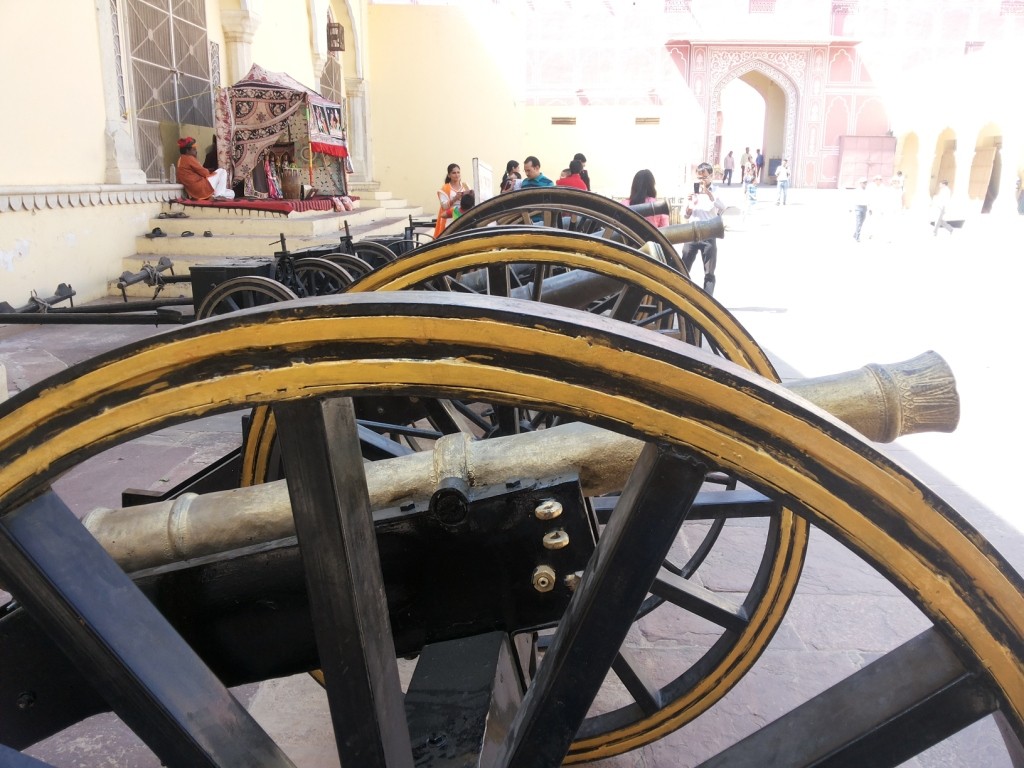 Once we finished quickly with City Palace, we walked towards Jantar Mantar, which is very close to the exit of the City Palace.

Jantar Mantar is yet another fascinating point of interest in Jaipur. If you are from Delhi, you might have already seen a Jantar Mantar there. For those who dont know what a Jantar Manar actually is, lets know a bit about it. 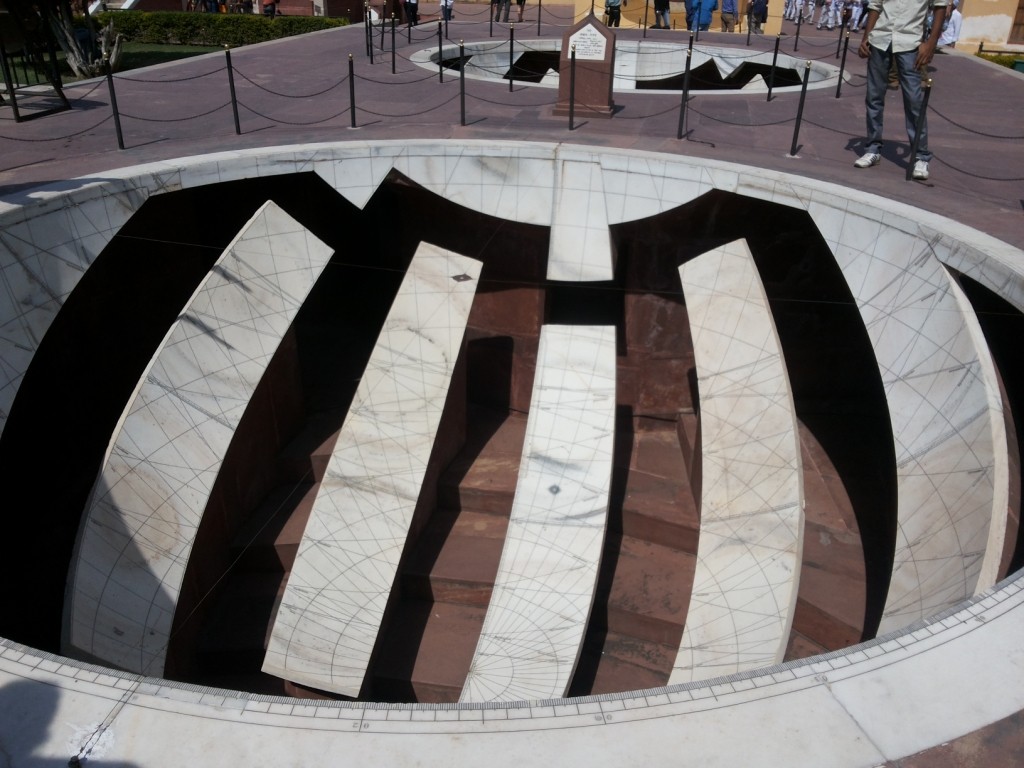 The primary purpose of Jantar Mantar was to compile astronomical tables, and to predict the times and movements of the sun, moon and planets. The Vrihat Samrat yantra in Jantar Mantar, Jaipur is a sundial which can give the local time to an accuracy of 2 seconds. 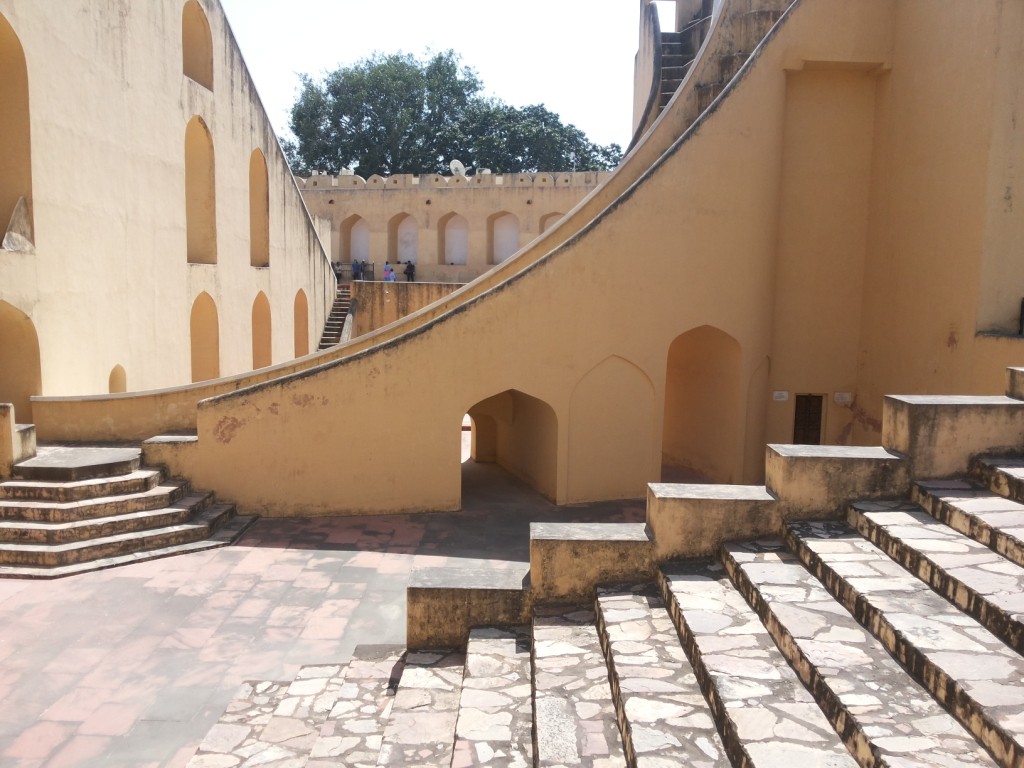 Till the time Clocks and Watches were not invented, people used these instruments to calculate the time and they worked in a very accurate manner! As a matter of fact, there are 5 Jantar Mantar in India out of which Jaipur’s Jantar Mantar is the largest and its stone sundial is the world’s largest.

Right after we finished visiting the Jantar Mantar, we walked towards Hawa Mahal which is just 200-300 m away. It lies in the pink city of Jaipur and has an amazing architecture. 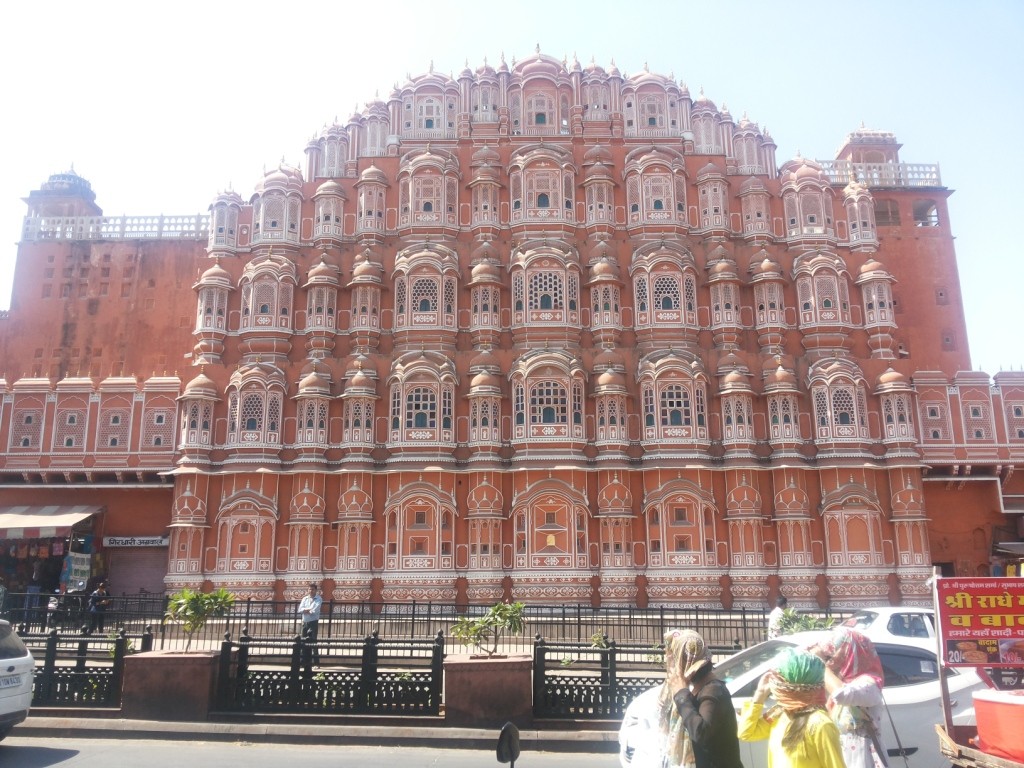 Hawa Mahal(Palace of Winds) is a high screen wall and was built so that the women of the royal household could watch the street festivals while unseen from the outside. 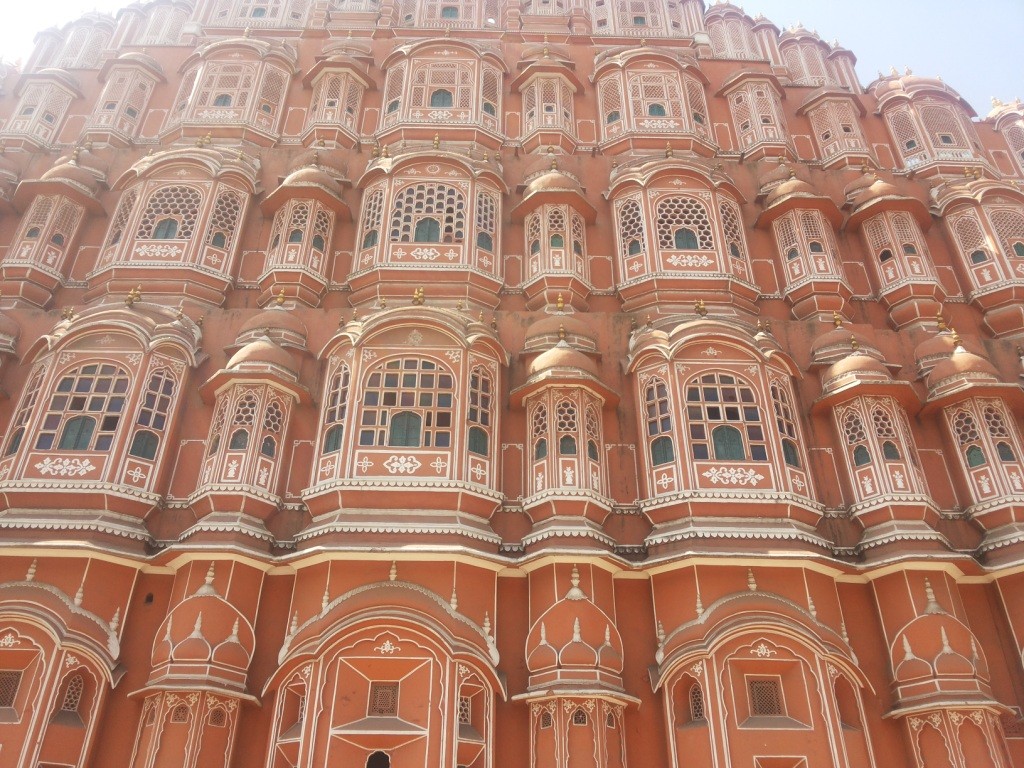 I bought a few home decor items and Lakh bangles for my wife from one of these shops here. 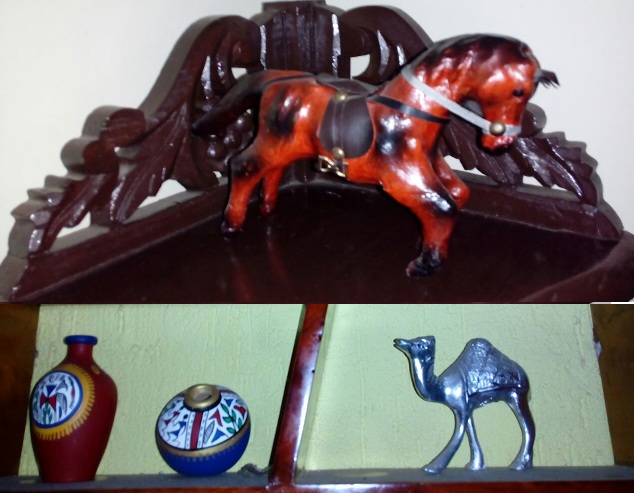 You can also get a lot of handicrafts, home decor items and Bangles outside Hawa Mahal in the Johari Bazaar Market.

After finishing off with Hawa Mahal and a bit of shopping, we took out the car from parking and moved towards Jal Mahal (Water Palace). Jal Mahal is located in the middle of Man Sagar Lake, about 6 km from Hawa Mahal. 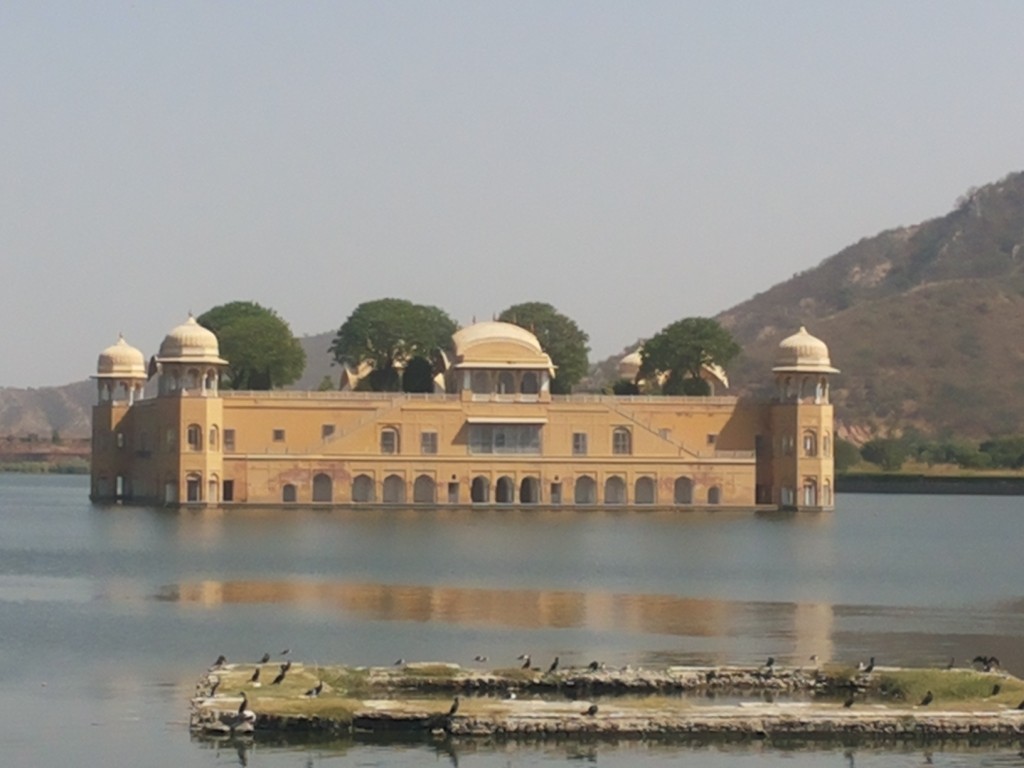 The Jal Mahal looks really beautiful right from its first look. We parked our vehicle on the opposite side of the Jal Mahal and had some good time there. 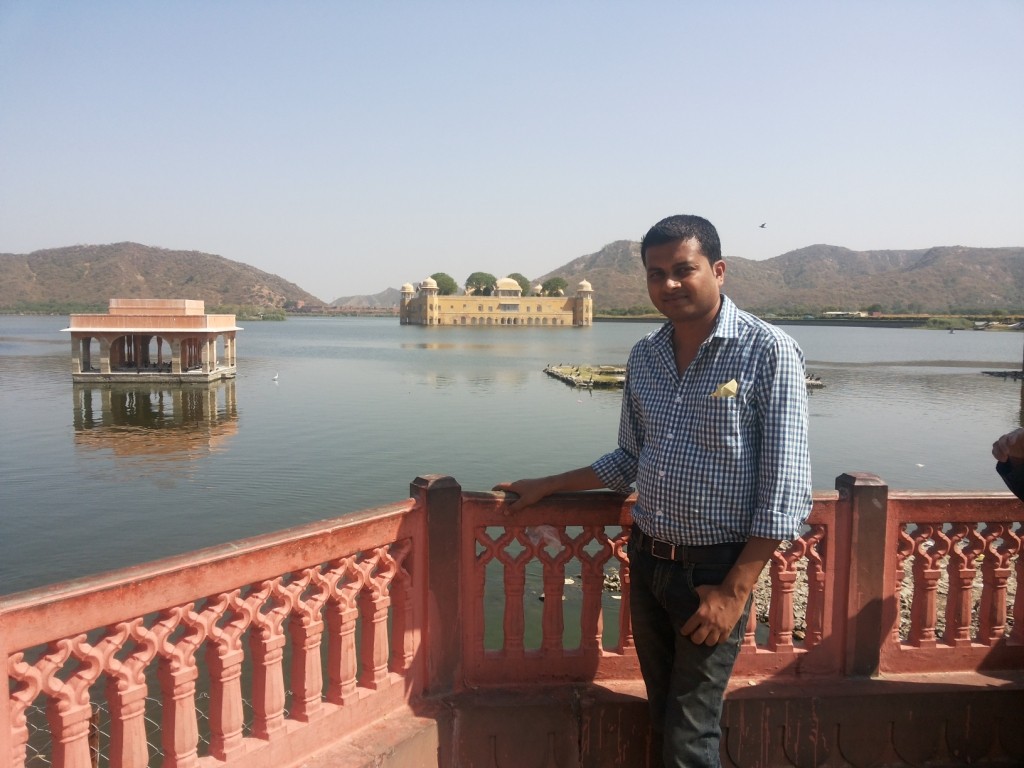 Though, the visitors are not allowed to enter the lake and reach the Jal Mahal, it still attracts a lot of tourists just for getting a look.

Finally we moved towards Amer Fort (Amber Fort), which is on the way towards Delhi. It was around 4:00 pm when could reach near Amer Fort and we were getting late, so we planned to skip this Fort. 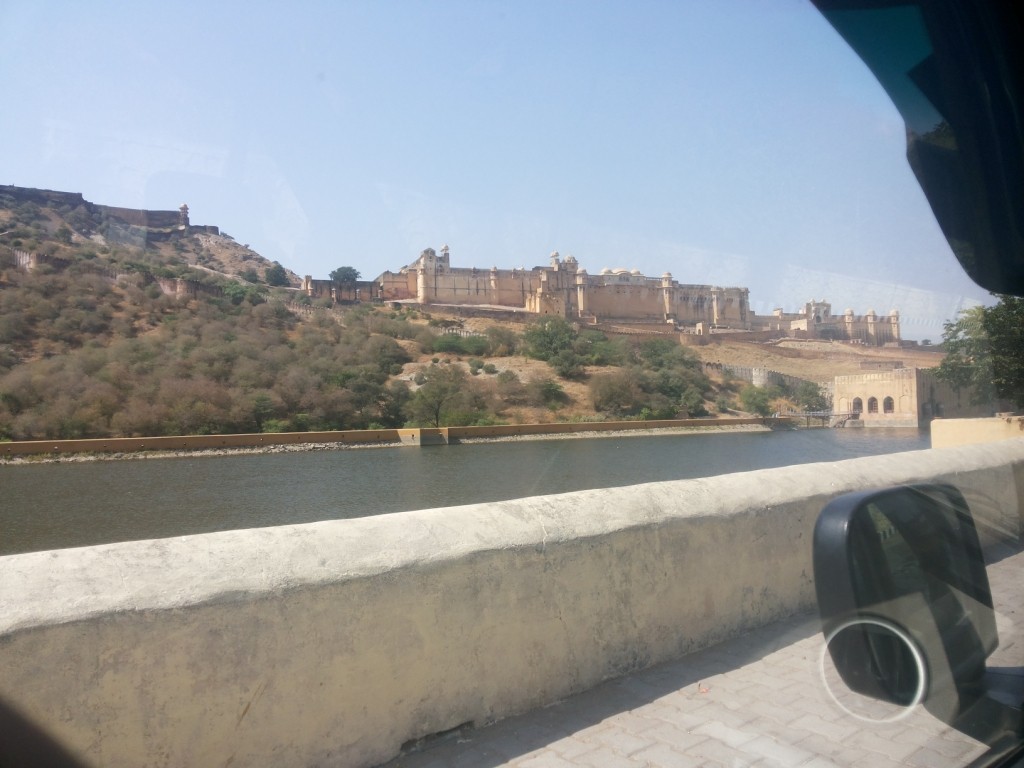 I clicked this Photograph of Amer Fort from the car itself. You can read about my detailed article on Amer Fort, which I covered on my next trip to Jaipur in January 2016.

We finally moved back for Delhi from Jaipur at about 2:30 pm and reached Delhi after 8 hours at about 10:30 pm due to very slow traffic, the reason being the festival of Ganesh Chaturthi. 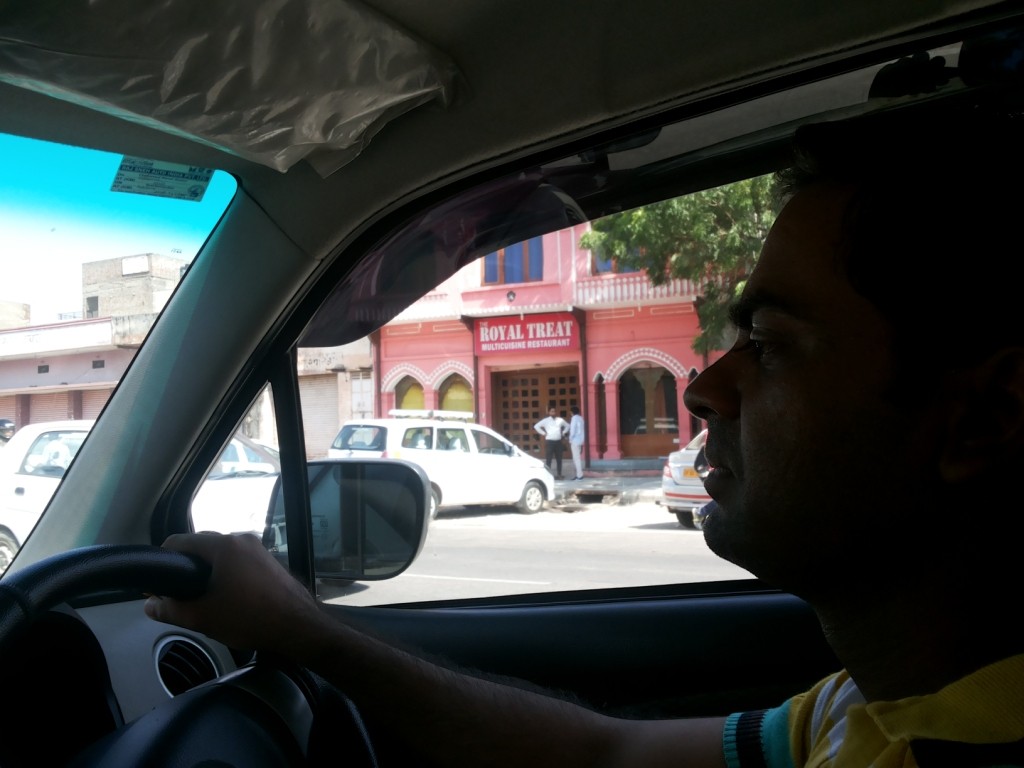 One last thing I would like to mention is that you would not get CNG anywhere in Jaipur or any city of Rajasthan.

Hope you liked reading about our short trip to Jaipur. If you have any questions or you want to share your experience, you may leave your comments below.