Bangalore Palace : Beautiful Palace in the heart of Bangalore

Anirudh Singh April 3, 2016 Bangalore Comments Off on Bangalore Palace : Beautiful Palace in the heart of Bangalore

Situated in the Palace Gardens, the Bangalore Palace lies at the heart of the city Bangalore. The palace is quite similar to the medieval castles of Normandy and England. Once the residence of the Wodeyars, it now serves as the venue for various concerts, exhibitions and cultural programs held in the city.

Bangalore Palace : All you need to know about it !

The palace was built by Rev. J. Garrett who was the first principal of the Central High School in Bangalore. The palace was further bought by the King Chamarajendra Wodeyar. The palace is now owned by Mysore royal family.

This palace with a floor area of 45000 sq.ft was built by the Rev. J. Garrett. The palace was bought by King Chamaraja Wodeyar in 1873 AD. It is said that in 1970 Jaya Chamarajendra Wodeyar transferred the property to two companies promoted by a civil contractor. The companies were known as Chamundi Hotels (P) Ltd. (110 acre) and Sree Venkateshwara Real Estate Enterprises (P) Ltd. (344 acre).

It was claimed by Maharaja’s son that it was a deceitful deal. The legal battle continued between the two sides. In the meantime the Srikanta Datta Narsimharaja Wodeyar (the son of Maharaja Chamarajendra Wodeyar) gave 28 acres each to his five sisters. On the other side the Government of Karnataka was attempting to confiscate the property. The controversy is still in pending before the Supreme Court.

Built in Tudor style architecture, the palace look magnificent with fortified towers, turrets, gothic windows, battlements, wood carvings, floral motifs, cornices and relief paintings on the ceiling in the interior of the palace make it look all the more elegant. The furniture of the palace was neo classical, Victorian and Edwardian in style. 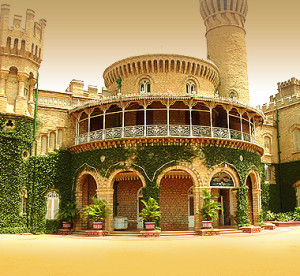 The ground floor of the palace consists of an open courtyard with fluorescent blue ceramic tiles. There is also a ballroom to hold private parties. Through an ornate staircase you can reach the first floor which contains an elaborate Durbar Hall where the king used to address the assembly. The Durbar Hall is mounted with a colossal elephant head. There are Gothic Windows adorned with stained glass on one side of the hall. There is an abundant use of yellow colour in the hall. An attractive dining table is present belonging to the Diwan of Mysore, Sir Mirza Ismail. The table contained a mother-of-pearl inlay with Chinese   lacquer work. Paintings of Raja Ravi Verma are also exhibited in the palace. The inner walls of the palace are also festooned with paintings 18th -19th century.

The palace which was once surrounded by beautiful gardens has lost much of its original charm. What stands in front of us is to an extent a renovated palace. Sri Kanta Narsimharaja Wodeyar took a step to renovate the palace. The woodwork has been renovated and the ballroom has been refashioned. 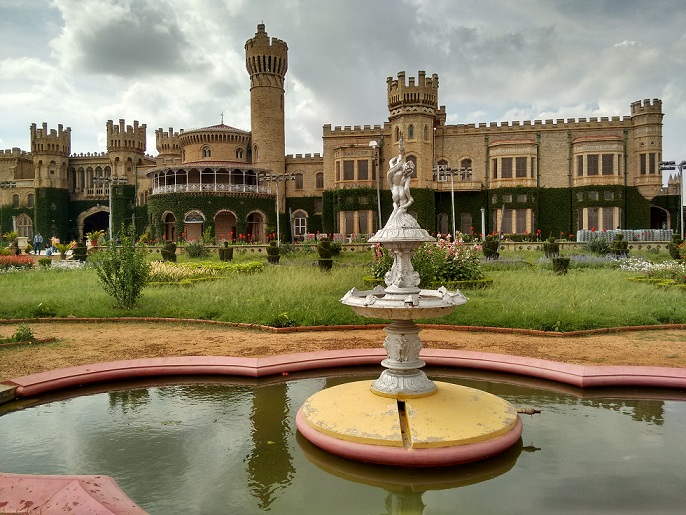 The palace furniture has been newly equipped. A room of the palace has been converted into a boutique to exhibit royal accessories. The renovation of garden with Mexican grass and illumination of the Palace are in progress. The palace also harbours an amusement with various joy rides, water park and snow room.

The palace grounds have been hosts to various major public events such as musical concerts, premiers etc. The largest paid concert of India with around 38000 people in the audience took place in the Bangalore Palace. It was the performance of Iron Maiden in 2007. The opening Ceremony of Champions League T20 also took place in the same grounds.

The elegant Bangalore Palace is located in the Palace Gardens near Mount Carmel Institute of Management, Vasanth Nagar, and Bengaluru – Karnataka, India.

You can reach easily by any means of transport. The palace is easily accessible from all points of the city. Bangalore is will connected to all states and cities of the country.

There is an extra charge of Rs 675 for still camera and Rs 1000 per camcorder.