Home / Railways / No Queue : Get Train Ticket from ATM

No Queue : Get Train Ticket from ATM

Raj Gopal Singh Verma September 7, 2015 Railways Comments Off on No Queue : Get Train Ticket from ATM

No Queue : Get Train Ticket from ATM

Automatic ticket vending machines will dot the New Delhi and neighbouring railway stations soon. As per the commitment of Indian Railways, the Government has geared up the machinery to install Cash/Smart Card operated Ticket Vending machine (CoTVM). These ATM-type machines are unmanned self-operated kiosk which can be used by passengers themselves to buy unreserved tickets through Currency or Coins of different denominations as well as smart cards. The concept of Automatic Ticket Vending Machine (ATVM) has been introduced by Indian Railways to reduce passengers queuing up at the Ticket counters at the Railway Stations. ATVMs are touch screen based ticketing kiosks operated using Smart cards. The passenger can purchase and recharge the Smart cards from nominated ticket counters. The Smart card has to be placed on slot in the ATVM and user has to select the route and destination using the touch screen. After the confirming the details, the ticket is printed. Once the ticket is issued the charge is debited from the Smart card. Currently, in Mumbai division of Central Railway presently 660 ATVMs and 123 Smart cards recharge counters are available at 73 stations. This system is gradually being popularized among the commuters and presently this system is carrying 23% of overall tickets. 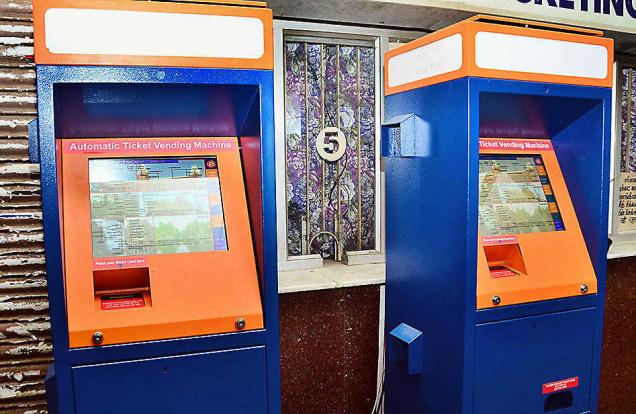 These kiosks will display so easy interface for ticket transaction so that the little literate user can operate these machines without any hesitation. The kiosk accepts currency and coin of all denominations of Rs five and above. The machine does not accept soiled, cut, glued, taped or colored notes and accepts currency notes of Gandhi series.

It is expected that CoTVMs will reduce queue length at existing ticket counters by providing an alternate unmanned ticketing solution and mode of payment.

Although the ticket vending automatic machine are working in some railway station already but these new generation vending machines will have some extra innovative features. The basic difference between Automatic Ticket Vending Machine installed upto now and newly introduced CoTVM is that ATVM can issue tickets through smart cards while CoTVM can issue tickets using Cash (notes & coins) and smart cards. It can also be used for recharging these smart cards.

CoTVMs have the following functionalities:-

The machine has two access doors, both at the front side of the machine and is equipped with mechanical & electronic locks. One door is used for maintenance activity by the service engineer. The second door is for accessing the cash box and is integrated with an alarm system. The alarm will go off whenever the door is opened by any unauthorized person.

The machine has a cash box with electro mechanical lock at the bottom. Whenever the authorized supervisor wants to open the cash box to takeout shift cash, he/she will gain access to the machine by using a supervisory smart card. On keeping this smart card on the reader slot and pressing the Indian Railway logo on top right side of the screen, the supervisor’s menu will appear on the screen. After entering the password, machine will print the Daily Trains Cash -cum-Summary Book (DTC) for account of the collected cash. The cash box has the capacity to retain 25,000 notes and 3000 coins.