Exploring the Magnetic Hill of Leh-Ladakh

Being in the Paradise of the Earth, it is no less than a paradise itself. Ladakh is located between the Kunlun mountain range in north and main Himalayas to the south. Having bounded by two of the greatest mountain peaks, (i.e. The Great Himalayas and the Karakorum) Leh-Ladakh manages to be a place like no other. It is said that Ladakh is the only place where a person sitting in sun with his feet in shade can experience sunstroke and frostbite simultaneously. It has numerous sources to surprise us to an awe one of which is the Anti gravity Magnetic Hill.

Magnetic hill also called Gravity hill in Ladakh is quite an unbelievable place where you will find your vehicle moving uphill at a speed of 10-20 kmph even with killed engine. The whole phenomenon happens without any visible external force or eye trick. 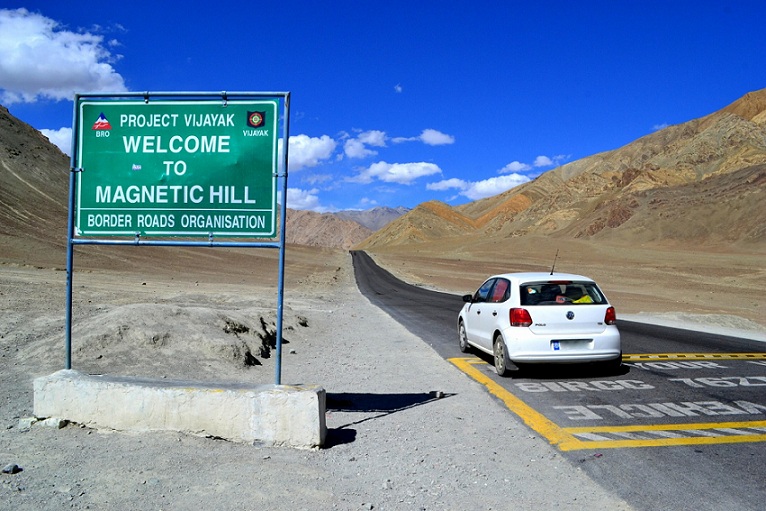 All you have to do is to park your vehicle on our around the white box marked on the road by the Border Roads Organization and watch your vehicle moving up the steep mountain without any ignition.

People’s theories of the Enigma

The local folks of Ladakh, especially the villagers have a belief that there once lied a pathway that lead straight to heaven. People who were deserving of it would automatically be pulled up however the undeserving ones could never make it up the path. 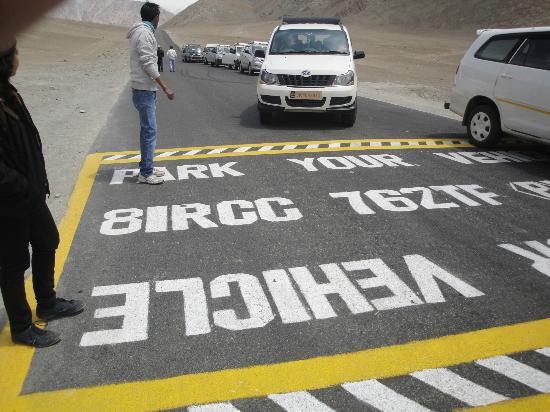 It is believed that a magnetic force is at work behind this mysterious phenomenon which is strong enough to pull heavy vehicles uphill. Even the aircrafts flying over the region increase their altitude so as to avoid magnetic interruptions.

Neuroscience holds a concerto poly of optical illusion according to which you either see something that is not there at all our you see things different from what they physically are.

Magnetic Hill in Ladakh is a consequence of the same concept. It means that a very slight downhill slope appears to be an uphill slope which is why vehicles slowly gain momentum. This illusion is caused by the specific layout of hills obstructing the horizon. These holds are naturally laid in such a way that they will deceive your mind to believe that you are going up. Horizon is a reliable reference for judging a shopping surface. As for the aviators up in the sky, they cannot see the horizon and just because of the electronic equipments and gadgets they are able to make out whether the plane is flying straight upwards of downwards. If the horizon is obstructed one gets confused and can often perceive things to be horizontal or vertical when they are actually not.

All over the world there are many gravity hills as a result of Optical Illusions.

How to locate the Hill ?

Ladakh constitutes two districts, one being Leh and the other Kargil. Leh a part of Jammu and Kashmir is approximately 360 km away from Jammu.

The mysterious hill is situated along the Leh-Kargil Baltic National Highway at a distance of 30 km from the town of Leh and at an elevation of around 14,000 ft above the sea level.

The best season to visit Ladakh is during the summer season from June to October. In this season temperature ranges about 20-30 degrees Celsius during day time with warm and bright weather.

You can enjoy the beauties surrounding the magical magnetic hill.

Other Adventures of Ladakh

▪ Skiing in popular routes such as Panikhar to Kanji, Drass to Sonamark, etc.

▪ Relish your mouth with stupendous delicacies of Ladakhi cuisines in popular restaurants.

Visit the awe-inspiring Magnetic Hill of the awesome Ladakh of amazing India to know your country better.