Tenzin – The Only Sitting Monk Mummy in Gue village, Spiti

Spiti Valley in the State of Himachal Pradesh of India visualizes the image of snowfall, beautiful hills covered with snow and tourists enjoying the weather there. But the Trans-Himalayan cold desert valley is not all about the snowfall and mountains. There is something weird. A village, name Gue near the valley has a mummified monk, Sangha Tenzin, who had given up his life while meditating and is more than 500 years.

Tenzin is the only Buddhist Mummy in the world, that too, in a sitting position

Location of the Village

Mummy of Sangha Tenzin is not the solitary mummy in the area. There were other mummies also in Tibet which were buried by Tibetans just after the Chinese invasion. This mummy was discovered by the villagers in 1975 when an earthquake struck the region. Located at a distance of about 40 kilometers from Spiti, Gue village is a restricted area and under the control of ITBP. Few people knew about the mummy until Anuj Singh, photographer and his fellow biker Shahwar Hussain first photographed it way back in the 90’s.

Gue is a tiny hamlet in the Spiti valley of Himachal Pradesh, almost on the Indo-China border. There are no buses to Gue and a stranger always has to take a taxi to reach the long and tedious journey. Gue also straddles an ancient trading route over which spices, wool, salt, precious stones and sugar moved between India and Tibet. Monks and high Lamas frequented this route.

The State of Mummy

The mummy is remarkably well preserved for its age. Its skin is unbroken and the hair is still on the head. It is a strange fact that the process of mummification of this mummy is natural and no chemicals have been used to preserve it. hough the mummy is dated to be almost 500 years old, it has a certain air of freshness.

Chances are it’s the clean air and cold that contributed to the excellent state the mummy is in — with hair and teeth well preserved. The silk robes on him seem to conceal the tremendous power and will that he must have had to undergo the mummification process.

Carbon Dating of the Mummy

Carbon dating of the mummy has scientifically proved that it was the body of a 45 year old Lama from the last quarter of 15th century. It seems this mummy was of a monk from Gelugapa order who were practitioners of “Zogchen”, the highest form of meditation to find a solution to the destructive drought and famine that had hit the western part of Tibet. (Spiti was part of the larger Tibet at that time). Continuous meditation and fasting before attaining ‘nirvana’, the body was probably devoid of all juices and any bacteria, which preserved the body with no chemical embalming. Natural mummification has preserved the body of the Lama for nearly 600 years ! 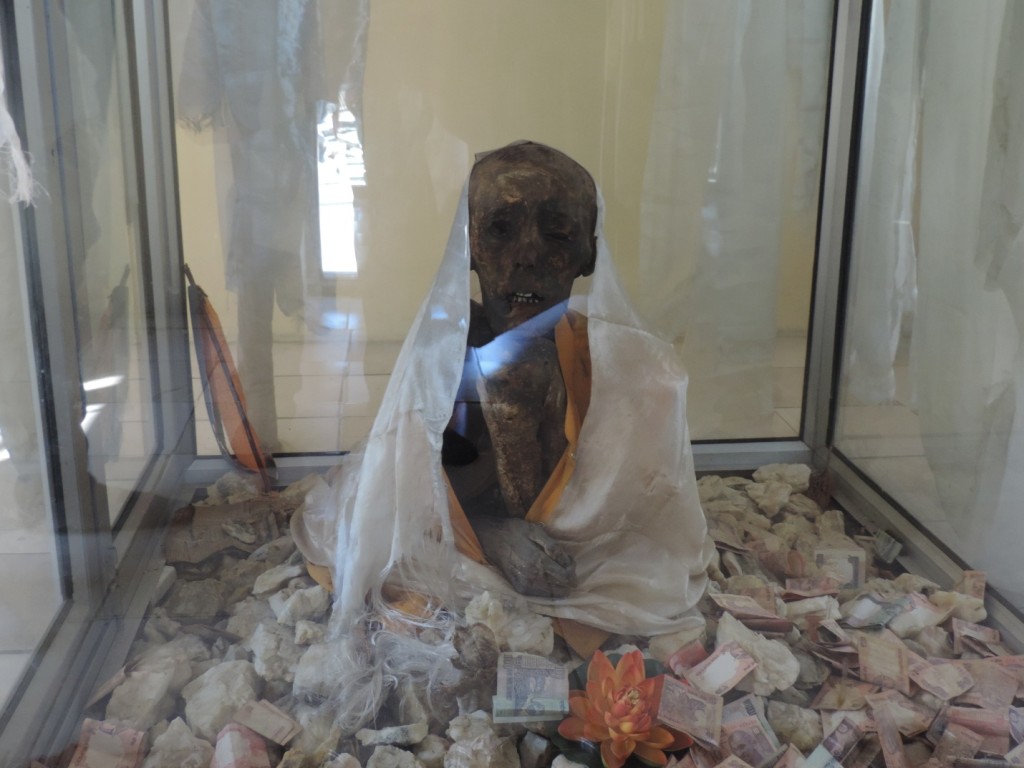 Natural mummification is an extremely difficult process in which the body is made to react in such a way that body fats and fluids reduce at a constant rate and the organs that can decay are reduced in size. A special diet is given towards the end to preserve the meat on the bone. The body is kept in a posture where the monk can continue to meditate, by using a restrainer around the neck. It is believed that when Sangha Tenzin’s soul finally left his body, a rainbow appeared across the sky and the village was rid forever from scorpions. With thoughts of the mummy and the serenity of the village still lingering in our minds, we bid adieu and continued our journey towards Kaza.

The best time to visit is during the summer months from June to September when the road conditions are good and the nights are not too cold.

Gue is a quiet, peaceful and beautiful hamlet with a few houses and a few hundred people living in small huts in the midst of the mighty Himalayas. Gue is still untouched by modernization and the villagers travel on foot to far off places each day to meet their daily needs.

A day trip to the village of Gue is good enough because there is nothing much to do in the village other than looking at the mummified lama. The localsl of the Gue Village are really nice people & they go beyond their duty to help you.

What a landscape! There is this mummy lodged in a tiny room and behind that are snow capped mountains with the misty clouds. It is an amazing experience to stand there and just look around you. The awesome Gue mummy and the lovely villagers also leave you mesmerized by the end of it. This is a must visit. Stand and sink in the beauty.