Change is inevitable, as the legends say, but with time we must understand and carry along the good things with us in changing times and years. Mankind has evolved in every sector and the lifestyle has seen manifold changes, both good and bad. We have changed ourselves, our customs, our traditions and things around us have changed accordingly. It is, though, important to save the traditional things and pass it on to the next generation to keep them alive. Also, it is the responsibility and duty of the coming generations to accept it and keep it alive.

An Uru typically is a large vessel, in appearance, made up of primarily high-quality teak wood and needs skillfully mastered professional hands to build them. 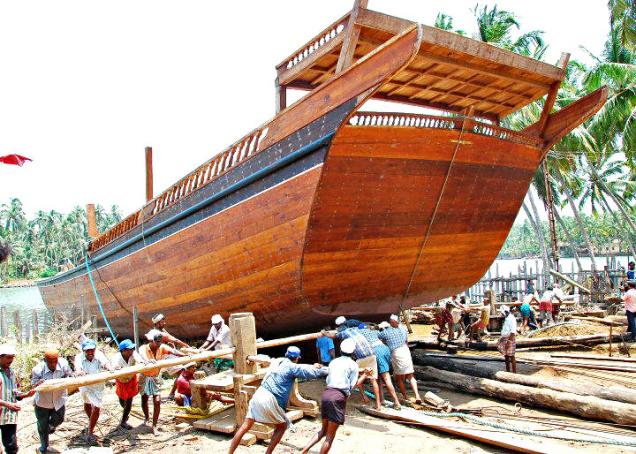 The construction needs a team of minimum fifty craftsmen and at least three to four years for completion. It is the prolific talent of the craftsmen that they do not need any blueprint all the while during the construction. The blueprint is there in their minds, their dedication, and their focus on the job is what makes them going.

One of the things which were used since ancient times – Boats for Trading. Chinese, Japanese, Arabs, Persians and Europeans used to travel through the sea routes for Trading. Arabs traced the Indian subcontinent and landed on the shores of Kerala for Spices.

They slowly came to know that the forests also have good quality Timber that can be used for the construction of what they called – “Dhows” or the “Urus” as they are named in the Malabar regions of Kerala. They started ordering for the manufacturing of these “Fat Wooden Boats” to be used as vessels for trading. And the rest is a history, which is still carried forward though not at a large scale as it used to be.

These craftsmen are from, a place which is around 10 kms from the south of Kozhikode town near the Chaliyar River in Kerala, Beypore. Beypore was once a trading center where the Chinese, the Japanese and the Arabs used to visit and trade. The port has 1500 years of history of making “Urus”. It is the talent of these craftsmen that this place once underwent through a huge demand for the Uru. It is only with the invention of Iron and Steel that the demand from Western Asia for these ships fell.

Though the need for the Urus has gone down drastically since then, but the craftsmen still keep the art alive by making small model or prototype of the Urus. They even sometimes make them on a customized order as well. The majestic and the dynamic Urus once surging the Seas must not die just like that and the craftsmen should pass on the art to the next generation and at the same time the coming generation must learn to carry the pride of this Art of – “Making Handmade Cargo Ships”!