Mankind has seen thousands of inventions from tens and thousands of inventors, for the betterment of humankind and making things simple and that has evolved the human beings. There are around 127 inventors in the history who have more than 200 inventions under their belts. Of these 127 there are 3 who belong to India and have significant contributions. They are Gurtej Sandhu – inventor of VLSI, and semiconductor device fabrication; Ravi K Arimilli – inventor of Computer Architecture, Semiconductor memory and Symmetric multiprocessing; and Devendra K Sadana – inventor of Solar cells, OLED, and LEDs. There are a lot of inventors in this world who we are not acquainted with but their contributions are as important as any other. One such inventor is – Mr. Uddhab Bharali.

Born to a business family in Lakhimpur district of Assam, in 7th April 1962, he was punished, not for his mischief’s, but for his numerous questions put across to the Government school mathematics teacher. His brilliance was very well accepted and appreciated by the school which double promoted him twice- from class 1 to class 3 and class 6 to class 8. Today this inquisitive and curious child holds as many as 120+ inventions in his name.

Uddhab completed his school studies at the age of 14 years and took admission in engineering in Jorhat Engineering College. In 1987, he had to drop his engineering after completing AMIE Sec 1 due to a poor financial condition of the family.

His family was into debts and to help his father take out of the debts he decided to make a polyethylene- making machine, and sold it in Rs.67000/-, which otherwise could have cost anyone not less than Rs.5 lakhs. Since then he has invented a lot of machines but the accolades came to him only in 1995.

The famous eco-technocrat, novelist and river engineer Mr.Arnab Jan Deka wrote an article on Uddhab and published it in one of the most famous newspapers in Assam. This extensive publication of 7th May 1995 brought the talent of Uddhab to the general public. His talent was widely accepted and made him famous. In 2005’s National Innovation Foundation function his talent was acknowledged and was taken abroad as grass root innovator. 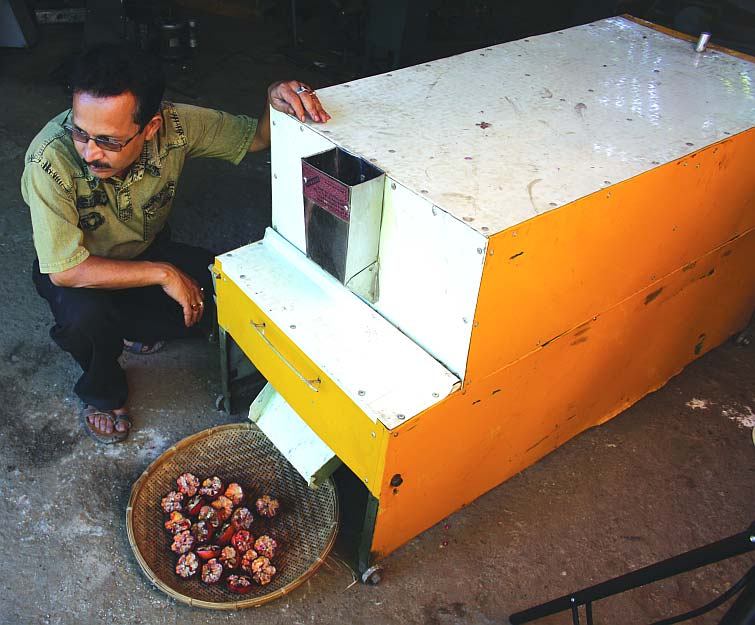 Here he came up with his world famous “Pomegranate Deseeder”. This machine was exported to US and Turkey. This is a unique machine which can take out the pomegranate seeds without damaging them, by separating the hard outer skin and the soft inner skin. The speed of deseeding 55 kg pomegranates in an hour makes this machine unique.

All his inventions are pro-agriculture and help the farmers. He, later on, invented the following – areca nut peeler, cassava peeler, the garlic peeling machine, tobacco-leaf cutter, paddy thresher, the cane-stripping machine, the brass-utensil polish machine, trench digger and much more. Just like the list of inventions are endless for Uddhab, so are the list of awards. The important awards are: