Humans since ages have been exploring things and acts where he gets enjoyment, entertainment, recreation, amusement, and pastime. He has invented “Games” as that thing. Games are where he gets all the above-mentioned things in addition to physical exercise, mental alertness, and social togetherness. It also gives him the sense of challenge, sense of competition, sense of strategizing and sense of Team. It enhances the speed- both physical and mental, agility and the focus on “GOAL”. Even the term, goal, is used in few games like football, hockey, basketball, and rugby.

Rugby is a very famous game in Europe and is played in almost all the major countries like Argentina, France, Germany, Australia, Scotland, England, Spain, Wales, Japan, Mexico and the United States.  It will be surprising for one to know that the origin of Rugby, is claimed by few to be in – Manipur, India.

Though the claims, of the origin of the famous game “Polo” in Manipur, is still accepted. The style of this game played in the north-eastern state of India, is slightly different. Though the locals claim that their game was copied and given, a “Modern form” of today’s Rugby. They call it – “Yubi Lakpi”!

The literary meaning of the game is quite interesting- Yubi means – Coconut and Lakpi means – snatching. The game is a seven-a-side football game played traditionally with coconut as the ball. The legend is that initially, the game was an enactment of the heavenly grabbing of the nectar pot after “Samudra Manthan”. It is held on the occasion of “Yaoshang Festival” at Palace ground in the presence of Royal family.

It is played in a field, measuring 45 by 18 meters in dimension, which is rough dried mud without grass. One side has a rectangular box measuring 4.5 by 3 meters and is the goal. A player has to pass the goal line approaching from the front with the coconut. 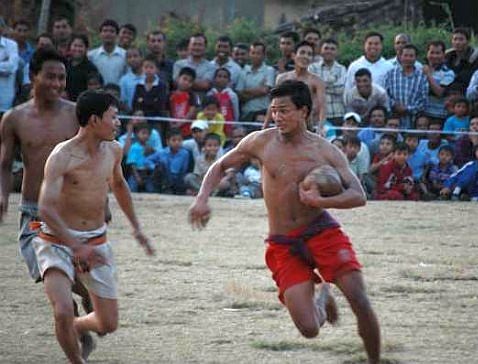 Each side has seven players and is well oiled so that the opponent cannot catch hold of him. They coconut, which acts as the ball, is also oiled. The oil soaked coconut is placed in front of the “King/ Chief Guest” before the game starts. The umpire starts and controls the players from the foul game.

The Players and Rules

The players wear only shorts and are normally without any shoes. They are not allowed to hold the coconut against their chest, instead, are supposed to carry it with/under their arms. They can only tackle the player holding the coconut and cannot kick or punch them. Once the player passes the goal line it is taken as a score. 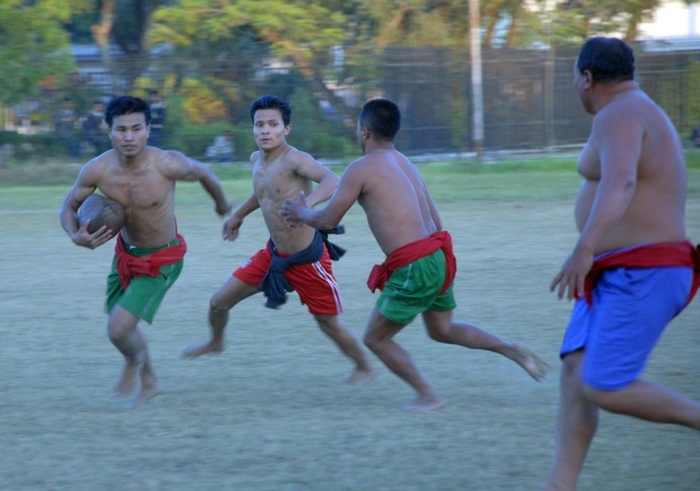 There are saying that it is an individual game where the King, who nowadays is generally a teacher or an official, watches the skills of the players and looks for the person who is most tactful. Whatever the facts may be but certainly there is no documentary prove of the origin of this game and its similarity with today’s modern “Rugby”. The motive is still the same – have fun and enjoy!